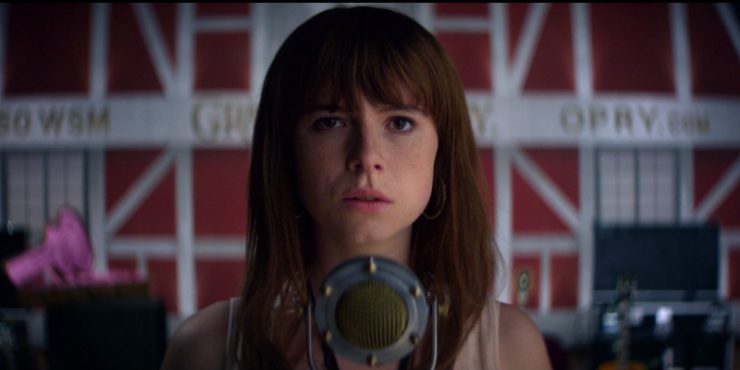 The main character in Wild Rose – played with great charm and grit by newcomer Jessie Buckley – loves country music. A young Scottish woman just released from a twelve-month prison sentence, she is not your typical vision of a country singer, but it plays into her bullish, scrappy nature that she seeks to pursue something so far-fetched. On her tricep, the Harlan Howard proverb “Three Chords and the Truth” is tattooed. It’s fitting, perhaps, since Wild Rose plays very few chords itself, instead depending on the standard plot points of a ne’er-do-well-with-one-phenomenal-talent story structure. The film has no aspirations to be great, which is a shame, since the performance at its center is so strong.

Buckley, an Irish actress, plays the Scottish Rose-Lynn, who has trouble adjusting to life after prison. Her mother, Marion (a strong Julie Walters), watched Rose-Lynn’s two young children while she was locked up, and has her reservations about her daughter’s ability to pick up where she left off. Rose-Lynn dreams of raising money to try her shot in Nashville. Marion would prefer her raise money in order to take care of her children. Like most stories of this nature, the protagonist is torn between her dreams and her responsibilities, and that tension is what builds the film’s arc. Unable to rejoin her old band (they’ve had enough of her wild, temperamental attitude), she instead must take a job as a cleaning woman.

Rose-Lynn gets astonishingly lucky when she begins working for Susannah (Sophie Okonedo) a wealthy British woman who takes an interest in Rose-Lynn’s singing after her children overhear it. Susannah pushes her to record herself and send it to Bob Harris (playing himself) of BBC2 radio. It’s hard to understand why the sweet, pragmatic Susannah would go out on a limb for the brash Rose-Lynn. There seems to be the slightest hint of guilt stemming from her wealth versus Rose-Lynn’s dire straits, but it’s never addressed directly. Whatever it is, the recording gets the ball rolling toward Rose-Lynn getting her shot to meet Harris and begin her singing career, a decision that might get in the way of her relationship with her weary children.

Wild Rose is sweet and sentimental in all the ways that it should be. Buckley and Walters both embrace the melodrama built within their characters, while Okonedo does her best to breath life into such a preposterous person. That Buckley performs all of her own singing gives the film a kind of Star is Born-esque authenticity, and adds oomph to the musical performances throughout the movie. Director Tom Harper – known mostly for television work – doesn’t make nearly enough out of the film’s novelty (a thoroughly Scottish woman obsessed with such an American style of music), and the film, frankly, lacks anything in the way of style. It is a performance-led story, as perhaps it should be, but watching the exceptional scenes between Buckley and Walters makes one wonder what could have been if anyone had asked for more.