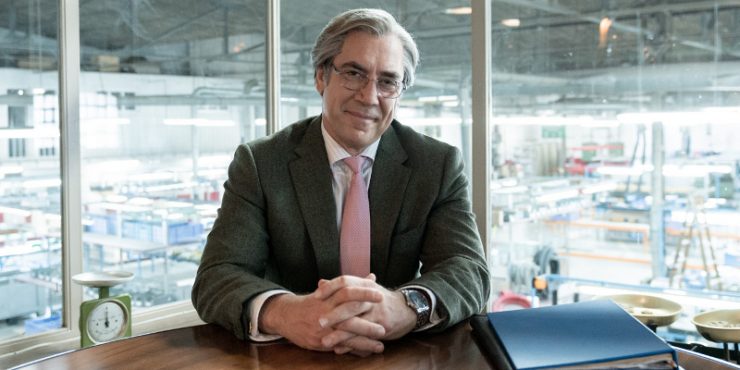 Because we’ve all seen movies before, we know that Javier Bardem’s egomaniacal factory owner in The Good Boss will be anything but good. The title is a sly nod to its audience that knows that the goodness in this character is only a front-facing facade, hiding a ruthless businessman willing to crush anyone who stands in his way. This is a problem with The Good Boss in general, which is meant to ramp up suspense as the stress of an important week begins to close in on our protagonist. But since we’ve seen this all before, and writer-director Fernando León de Aranoa does little to separate his film from all the rest, the suspense mostly dies on the vine, and what we’re left with is the flagrant scheming of a morally bankrupt man. Luckily for us, the man is played by Javier Bardem, one of our finest actors.

Bardem plays Julio Blanco, the owner of Escamas de Blanco, a scale manufacturing company in Spain. He’s inherited the business and his position from his father but that does not mean he is not hands-on in his approach. His opulent office floats above the factory with floor-to-ceiling windows through which he can view the entirety of the operation, from production to marketing. The business is a nominee for a very prestigious community award, one that Julio covets very much. In his home, a wall proudly displays all his accomplishments and certifications. In his small, provincial town he has established a titan reputation; a small-scale Elon Musk, if you will. As Escamas de Blanco awaits a visit from the awarding committee in a week, Julio wants to ensure that everything is perfect, and nothing jeopardizes his chance to win.

It’s important to stress that it is his chance to win. Despite presenting himself to press and public alike as a humble success – quick to call his employees family and never missing an opportunity to make a metaphor between the scales he produces and the justice/equality of his workplace – Julio is in fact a monstrous, manipulative dictator. He boasts of the merit-based nature of his hiring, but his Head of Production is his childhood friend, Miralles (Manolo Solo), whose job performance has become disastrously bad. When new female interns are hired, he continues a tradition of picking one as a sexual conquest. This one, Liliana (Almudena Amor), turns out to be more trouble than he’s used to. His wife, Adela (Sonia Almarcha), is clueless to his infidelities and runs a clothing shop that he also owns.

Julio’s biggest problem is an ex-employee named Jose (Óscar de la Fuente). After being fired in disgrace, Jose decides to camp out across the street from the factory’s entrance. On public property, Julio cannot have Jose removed, and the disgruntled worker begins hoisting signs disparaging Julio and shouting obscenities through a bullhorn. Most of Julio’s problems are ones of his own making – mistakes of judgment and lapses of ethic – but Jose’s fiery protest is completely outside of his control, and it’s for that reason, it’s the problem that makes him most angry. The Good Boss is filled with easy to spot metaphors, but Jose might be the most obvious. Reaching the end of his rope, with nothing left to lose, Jose warps the power dynamic between boss and employee, and it drives Julio absolutely insane.

The Good Boss‘s one-week-to-fix-it story construction is meant to tighten the screws on Julio and transfer his stress over to the audience, but Uncut Gems this is not. León de Aranoa instead makes a film that is surprisingly cavalier about Julio’s behavior, only occasionally choosing to ramp up suspense, or make you feel the walls closing in on him. Perhaps this is a political statement in itself – stressing the banality of Julio’s evil – but it renders the satire toothless, and makes one fatigued with the endless irony from the boss’s point-of-view. The conceit of the charming bad guy is fruitful territory, but the wink-wink nature of this script’s tone is maddening when its knives are so dull.

This was Spain’s 2021 submission for the Academy’s International Feature category, though it obviously missed the cut. León de Aranoa’s reputation in his home country is much more sterling than it is in the states (he and Almodóvar are tied for most Best Director wins at the Goya Awards), and one would hope that The Good Boss does not represent his best work. What we get is the portrait of a man born on third base whose obsession over meaningless awards (in the form of statues, plaques, and even women)  takes precedence over the well-being of everyone around him. Bardem and the ensemble cast do their best to elevate this well-trodden material, giving the movie edge and humor where the script lacks. The film may score political points for its pedantic rhetoric, but clever it is not.