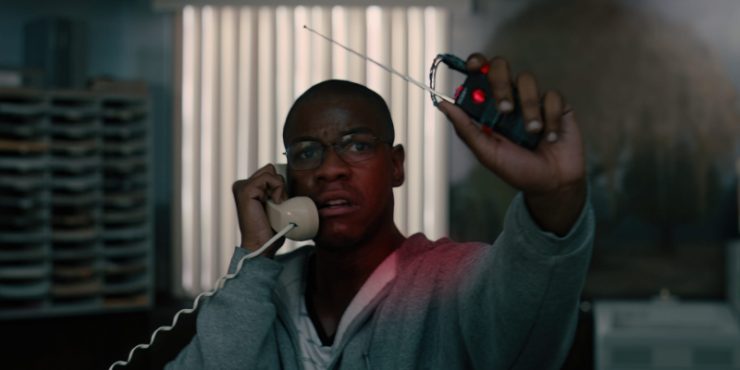 The legacy of the 1975 masterpiece Dog Day Afternoon is that every single bank robbery/hostage drama since has in some way borrowed from it. It’s become one of those inescapable things, like trying to make a sardonic animated series in the age of The Simpsons. Breaking, the latest film to fit this mold, runs toward and against Dog Day Afternoon in interesting ways, acknowledging tentpole plot devices while playing against expectations that may arise. Part of that contrast it to make a point about the mistreatment of the mentally ill, the disregard of military veterans, and the criminalization of Black men.

John Boyega plays Brian Brown-Easley, a veteran from Iraq who’s being shortchanged on disability payments from the VA over a clerical error. In an effort to gain attention over the injustice, he walks into a Wells Fargo bank in Atlanta and hands the teller a piece of paper saying he has a bomb. When senior manager Estel Valerie (Nicole Beharie) recognizes the situation, she calmly advises patrons and employees to leave the store. Before long it’s just Estel, Brian, and Rosa (Selenis Leyva), the teller who had the misfortune to call him over. Brian is erratic and nervous, but he makes pains to remind the two women that he has no plans to actually kill them. He only wants the attention of police and the media to make a statement about the VA’s mistreatment of him.

Most of Breaking is a very tense thriller, the tale of a man taking a situation to the extreme in order to be heard. He calls the tip line of a news producer named Lisa Larson (Connie Britton) who agrees to forward his message to the news watching audience. Amongst the local police, there is a skilled negotiator named Eli Bernard (the late Michael K. Williams, in his final performance) who empathizes with Brian and hopes to bring him and hostages out, unharmed. Eli is frequently arguing against trigger happy Feds who see Brian as a threat that must be neutralized. At home, Brian’s ex-wife (Olivia Washington) tries to hide the news from their young daughter (London Convington) who still has dreams of Brian buying her a puppy.

Director Abi Demaris Corbin expertly crafts the bank scenes and the outer components to increase suspense and keep layering on the dread of our informed worst case scenarios. Corbin also uses the large ensemble to draw conclusions about Brian’s condition, which is the film’s least subtle – and least effective – aspect. Based on an actual bank robbery, there are certain facts about Brown-Easley that can’t be avoided, but Breaking‘s finale lands with a heavy thud, and the suddenness is antithetical to the overall film. In the final minutes, it becomes sentimental about lessons learned because that is the only place left for the script to go. It’s as if the movie becomes suddenly ashamed to be genre. The performances make Breaking worth it, especially Boyega, who channels 00’s Denzel in grippingly satisfying ways.