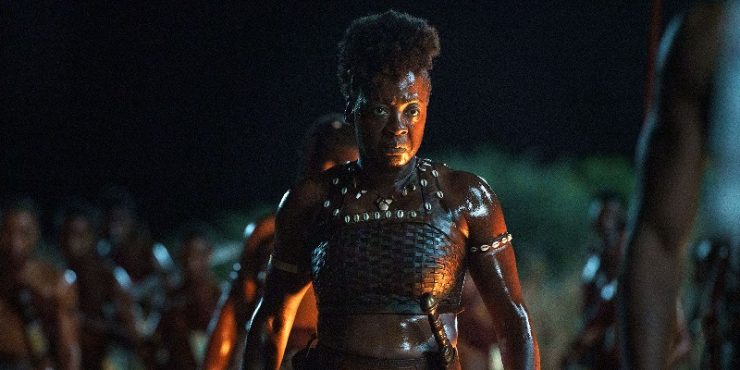 In the wilderness of West Africa in 1823, the kingdom of Dahomey lived amongst other tribes whose power and influence fluctuated with the rise of the European slave trade. What separated Dahomey from the rest of them was the Agojie, a fierce, all-female military regiment known for their consummate skill and un-matronly temperament. The Amazons of the Agojie are a proven piece of African history, but The Woman King is a fictional story about them. Director Gina Prince-Blythewood (of Love & Basketball and Beyond the Lights fame) crafts a beat-for-beat warrior film, valorizing the Agojie’s place not only within African lore but also as a rare all-woman army. Prince-Blythewood takes this nineteenth century tale of swords and spears and makes it a twenty-first century feminist film. The result is very square-peg-in-a-round-hole, but it’s never short of watchable and it stars one of the best movie stars on the planet.

Viola Davis was already Hollywood royalty before The Woman King and her presence can elevate rudimentary material. Davis plays Nansisca, the general of the Agojie, and a lead advisor to Ghezo (John Boyega), the young king of Dahomey. Nansisca fought in a coup that got Ghezo to the throne, so their commitment to one another is well-established. Many African kingdoms, lured by the luxury of European riches, turned to selling captives – and at times, even their own people – as slaves to white colonizers. On Nansisca’s urging, Ghezo wants to move past this practice, and establish a community that empowers African prosperity. First, they will have to fight a war with the Oyo Empire, a daunting rival kingdom that rides on horseback, kidnaps Dahomey citizens, and is led by the ruthless Oba Ade (Jimmy Odikoya). They also get assistance from their nefarious Portuguese benefactors interested in seeing Africa cannibalize itself. What they don’t have is the Agojie.

The Agojie get their recruits from both volunteers and converted captives. Nawi (Thuso Mbedu) is neither of these. After failing numerous times to marry her off, Nawi’s taciturn father brings her to the front gate of the palace and frustratedly dispatches her into the hands of the king. Eager to join the Agojie, Nawi’s sharp tongue and brash behavior initially puts her on the wrong side of Nansisca, but as training proceeds, Nawi proves to be a capable student and soldier. With the help of Izogie (Lashana Lynch), another veteran Amazon, Nawi climbs the ranks within the recruits and graduates into the Agojie. She joins as Dahomey plans their defenses against the Oyo. To complicate matters, amongst the Portuguese is Malik (Jordan Bolger), a mixed race nobleman whose mother was a Dahomey. Malik is conflicted with the two halves of his heritage, and coming face to face with the reality of his home country’s business in Africa makes him even more so.

The Woman King‘s years-long journey to release began (of all places) with actress-turned-producer Mario Bello discovering the history of the Agojie and pitching the idea to Viola Davis in 2015. Bello still shares a “Story by” credit with veteran screenwriter Dana Stevens, whose script fills The Woman King with plenty of soap-y plot details and shifts that are meant to maximize drama. These include Nawi’s romantic flirtations with Malik, as well as several major character reveals throughout the movie that I’ll leave unsaid. I’m not sure how much any of these are needed within a story inherently rich in compelling character dynamics, especially within the ethically murky landscape of Duhamey’s own involvement in the slave trade. Stevens side-steps a better (perhaps less palatable) version of this story in courting a more mainstream appeal, a decision which any studio head would cheer but which flattens the moral complications of its characters and makes it an overall less interesting movie.

Prince-Blythewood does her best attempting to craft thrilling battle sequences, especially in the choreography of the acrobatic Agojie, who manhandle their male opponents with efficient (and vicious) alacrity, but the script’s lack of substance handcuffs her ability to make a fully exciting action picture. The Woman King‘s middle hour sags ponderously, missing the film’s early enthusiasm and energy, as well as the finale’s stirring sense of triumph. That Prince-Blythewood is able make something on this scale on a $50 million budget is impressive in and of itself, but the film’s choppy editing (by Terilyn A. Schropshire, a frequent Prince-Blythwood collaborator) disrupts the rhythm. Blunt cuts lobb off entire chunks of a scene as if mandatory studio notes required the film to be delivered under a certain length. It’s not hard to imagine a version of this movie that’s twenty minutes longer but has better pacing.

Like all good directors, Prince-Blythewood properly appreciates the talent in her cast. The actors, frequently asked to legitimize contrived plot points and head-scratching coincidences, still create a wondrous sense of intimacy and commitment that really sells it all to the audience. Mbedu is the narrative center of the story, and the young actress (seen previously in Barry Jenkins’ Underground Railroad) flawlessly hurdles the characters numerous side plots, giving us a sign of a movie star to come. Lynch delivers comic relief and thematic resonance often in one line. Boyega weaponizes his charm as Ghezo, a king who’s vanity and humility shows itself in equal measure, always keeping the audience guessing at his motives. Sheila Atim plays Amenza, Nansisca’s confidante and closest friend. More than anyone, Amenza functions as a exposition delivery service, but Atim finds the humanity, and The Woman King is all the better for it.

Then there is the film’s star, Viola Davis. There is not much difference between what she does here and what Tom Cruise does in Top Gun: Maverick. Both films are consummate crowd pleasers built upon the electric screen presences of their stars, and neither movie would work without their stars being as good as they can possibly be. The Woman King won’t make nearly as much money as Maverick, but then again, The Woman King only has a minute fraction of that other film’s corporate resources. I wanted to like The Woman King more than I ultimately did. Despite lots of effort, the script never manages to create a human drama as compelling as its wartime intrigue. It’s not until its incredibly successful third act, with its visceral fight sequences, does The Woman King reach the emotional peaks of its epic aspirations. But I’m still a sucker for movie stars proving their mettle. This is unlike anything Viola Davis has done before, but I don’t think anyone is surprised that she totally nails it.