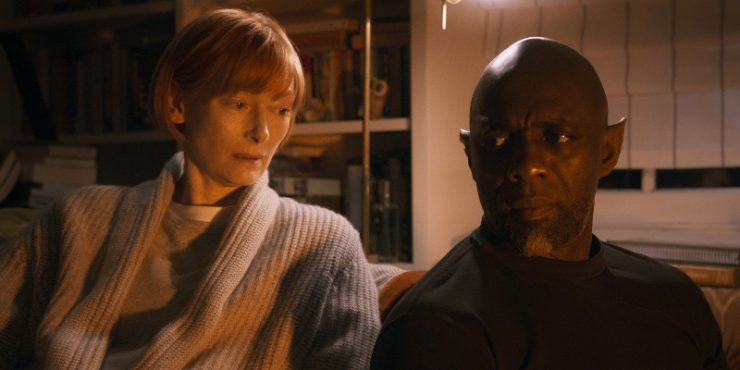 Mythical fables involving wish-granting genies are some of the oldest stories we’ve ever told. They are almost always parables about the unforeseen consequences of getting what we’ve always wanted. The latest film from George Miller, Three Thousand Years of Longing, takes this well-trod territory and places it in the twenty-first century, a time when the wonder of magic and fantasy have been replaced by the blunt realities of technology and industrialization. How would a genie – or in this case, a djinn – perform his duties in an era where magic seems impossible? For a director like Miller, whose films are elaborate constructions of outsized worlds, you can see how the subject matter would appeal to him.

Our djinn is played by Idris Elba, a sculpted leading man whose screen presence and magnetic charm would have been perfect in a time when mature movie stars were more appreciated. His djinn is imposing but polite, a little sad, and dutiful despite weariness from an existence that alternates between servitude and imprisonment. His latest subject is Alithea Binnie (Tilda Swinton), a British scholar of narratology, the study of stories. From ancient myths to contemporary narrative, Alithea has read it all, and travels the world attending conferences about the vast world of text. In Istanbul, she begins to feel harassed by hallucinations, aggressive figments of imagination that trouble, and even occasionally attack her. Her colleagues worry, but she assures everyone she’s fine. Nothing she can’t handle.

In an isolated bazaar, she chooses to purchase an antique bottle, slightly disfigured by burn marks but sparkling with vibrant blue and white stripes. There are bottles in better condition, but this is the one she chooses. When she gets back to her hotel room, in making an effort to scrub the bottle clean, she unleashes the djinn, a massive figure who can hardly fit into the room. Despite initial skepticism, Alithea understands that this is not just another one of her hallucinations. The djinn adjusts himself to a more manageable size and explains: she has three wishes for anything her heart desires. No stranger to the stories of the world, Alithea is wary of the path that making wishes could take. Despite the djinn’s protest that he is not a trickster, Alithea persists: there are no stories about wishes that end well for the wisher.

The djinn does his best to convince her to change her mind, and begins telling his own life story, which consists of heartbreak, entrapment, and occasional triumph. In a reversal of expectation, it is the djinn, and his love of his subjects, that attempted to make choices of reason, but their greed and lack of foresight led to their downfall and his incarceration. The djinn’s many tales of misfortune only succeeds in proving Alithea’s hesitance correct at first, but as his story evolves, the relationship between them becomes richer and takes on an unpredictable form. Based on the story from A.S. Byatt (“The Djinn in the Nightingale’s Eye”), the film’s script is written by Miller with Augusta Gore. It’s Miller’s first film since 2015’s Mad Max: Fury Road, which both resurrected a long-dormant franchise and revolutionized Miller’s reputation as an artist and auteur.

His seven-year absence suggests a long-gestating, blank check epic on the horizon. The marketing for Three Thousand Years of Longing certainly promises Mad Max-level adrenaline and insanity – equipped with the telling statement “From the Mad Genius of George Miller”. The film itself is a much more somber, steadied experience. What presents as an adventure between Tilda Swinton and a genie, instead becomes a story of two people (well one person and one very personable djinn) talking to each other in a hotel room, and telling intimate details about their pasts. The djinn’s existence has been an extended sequence of betrayal and hard luck, while Alithea’s comparatively shorter life is absent of nearly any human connection. “No parents, no siblings, no children,” she explains, but there is a divorce and there is loss.

Miller’s bombastic visual style takes the occasional dip into orientalist imagery and there are several times when its script bites off more than it can chew. There is a dissatisfaction with a 2022 culture that uses scientific breakthroughs to crush the wonder of storytelling and human connection, but pointed criticisms have varied effect – a sequence involving two ghoulish, Brexit bigot neighbors feels particularly forced. Three Thousand Years of Longing feels best when its dwelling in its idiosyncratic worlds of fantasy and romance. The djinn’s travels through the biblical tale of Solomon and Sheba or into the heights of Ottoman royalty allows Miller to craft lavish sets and eye-popping costumes (photographed beautifully by cinematographer John Seale), and reminds you that he is one of the most original visual masters, contrasting the beautiful and the grotesque to a startlingly effective result.

Mad Max: Fury Road was something of a miracle: an unquestioned action film that is a masterpiece of both ferocious filmmaking and narrative execution. Three Thousand Years of Longing is a much more minor key. Its fairy tale framing disguises its humanist impulses, and even its most outrageous set pieces are stories of someone searching for connection; whether it be the djinn with his flighty subjects or Alithea with the outside world. The performances from Swinton and Elba perfectly sell the unorthodox pairing between the pragmatic human and the fantasy creation, divinely arguing the importance that old-time imagination plays in human existence. Swinton’s dual modest elegance plays perfectly against Elba’s oversized movie stardom, and the two’s commitment to Miller’s bizarre story makes Three Thousand Years a piercing human drama.

I can already see myself spending the rest of my life defending Three Thousand Years of Longing against those disappointed by its bittersweet meditations about our lost creativity. Its elegy for a time of outsized human emotion felt poignant in a time where the social experience has been mostly reduced to staring at various screens. Alithea’s isolation (as well as her insistence that she’s doing just fine) felt incredibly relatable, and contrasted against the djinn’s millenniums-long search for freedom and communion, Three Thousand Years of Longing feels like a powerful statement for the value of embracing the most eccentric corners of yourself and your loved ones. It’s a shockingly sweet film from a directors whose world are often defined by their harshness. It appears it’s not all barbed wire in George Miller’s mad genius.