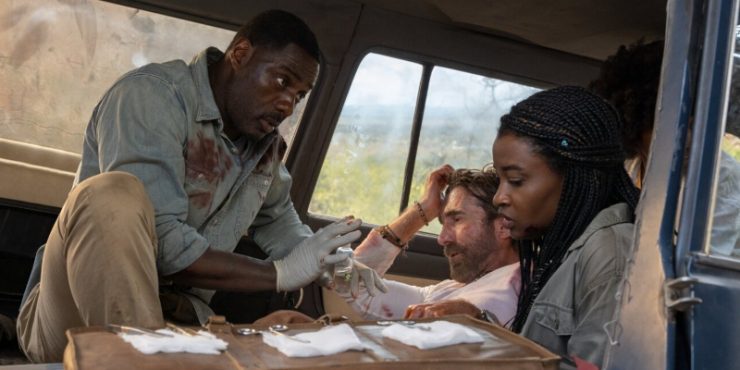 Watching Beast is watching the perfection of a movie that has a complete understanding of what it is. There are no sly tricks, no unbroken promises. There is the assurance of suspense, characters hampered by domestic drama, and most importantly: human-lion combat. The way Beast gets to those things is what makes it unique, and ultimately makes it better than most of the kind of smooth brain entertainment it gleans off of. This isn’t rocket science, and while Beast is better for knowing this, it also has no intention of playing down to its audience. It doesn’t want to be a “good bad movie”, but a good movie that recognizes its absurdities and gives you a setting in which those absurdities makes sense. Hollywood used to be much better at these kind of movies. In 2022, something like Beast feels like a miracle.

Idris Elba is our star. He plays Nate Samuels, a doctor who has brought his two daughters, Mare (Iyana Halley) and Norah (Leah Sava Jeffries), to the bush of South Africa to be acquainted with their mother’s former home. That mother has died of cancer, and shortly before her death, she and Nate separated. Nate’s absence in his ex-wife’s final moments has created an ocean of resentment between he and his daughters. Nate does not shy away from the responsibility. He is awash with guilt, and he sees this trip as a way to both build closure between his daughters and their mother, while simultaneously hoping to rehabilitate his own relationship with them. Waiting for them is Martin (Sharlto Copley), a longtime family friend who has his own complicated feelings about Nate and his behavior.

Unbeknownst to them, a group of fiendish lion poachers massacred a pride the night before their arrival. When they go to collect their spoils, they quickly realize that one lion managed to escape the attack, and now its searching them out hoping to exact vicious revenge. This is the situation that Nate and Martin incidentally roll into on their safari days later. When visiting a village, they find bloody carnage. The only animal who could have done this is a lion, Martin explains, but he’s never seen one behave this way. It’s not long before they find themselves face-to-face with the vengeful creature, with only their shabby vehicle to protect them. As their situation becomes more and more fraught, Nate must come up with some way to bring he and his daughters to safety.

Beast is a taut ninety-three minutes, with a lot of it taking place inside the rusty truck that becomes their fragile sanctuary. Nate’s skills as a doctor come in handy when Martin gets viciously attacked, and then again later when the same happens to Mare. In a situation of life and death, Nate’s pragmatic personality and high-stress profession bears fruit as he’s able to compose himself in the face of a ferocious big cat looking to tear them each limb from limb. Faced with perpetual attack, Nate and his daughters buy themselves small pockets of time to bring themselves to safety, only to find the lion lunging at them again moments later. The lion itself, a CGI creation, is terrifying in its construction. Beast does a good job of contextualizing the animal’s plight while still marveling at its brute barbarity.

Even as the movie’s most destructive force, we are never led to believe that the lion itself is the movie’s sole villain. That title belongs to the poachers, who reappear later in the film to find them stranded. Their presence only escalates the level of danger that they’re in, especially after they see Martin, whose anti-poacher reputation precedes him. Ruthless in their pursuits and macabre in their methods, the rooted evil of poaching is the closest Beast has to a political point-of-view. It ends up being mostly shading for the story of Nate and his daughters, who find themselves coming together and overcoming their own animosities. The trip does end up having the closure Nate was hoping for but in a much different way than expected.

Director Baltasar Kormáker shoots Beast in several long takes, the camera bobbing and weaving around trees and bushes, winding through corridors and doorways. The technique gives the attack sequences the immediacy of real time action. The long takes may be created by digital effects, but the result is still the same, building a suspense akin to classics like Cuarón’s Gravity, another film about people trapped in a sudden life-or-death scenario. The first third of this movie is all exposition and mood building, but once the lion appears, Beast is smart enough to not give itself too much lag time, keeping the pressure on Nate and the audience. It’s a perfect thriller, one that both capitalizes on its star’s charms and its director’s skills to make a fascinating thrill ride of a movie.