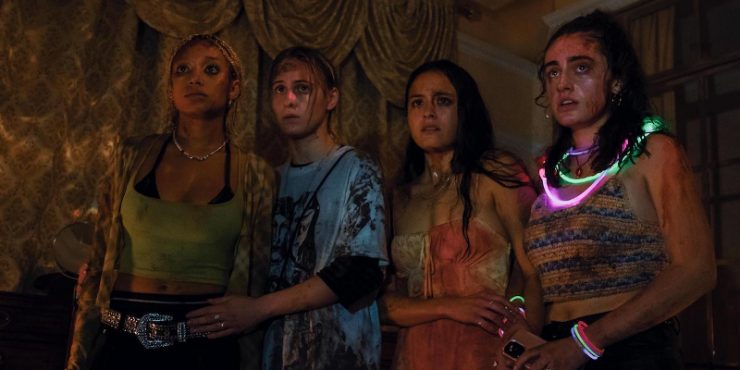 There are some legitimate reasons for the cultural fascination around Gen Z youths. The first generation with no experience of a pre-internet world has, no surprise, very skewed perceptions on society and human behavior. The banal stereotype is of a young person who has fundamentally built themselves on social media, turning memes into day-to-day language and treating the moral high ground like a civil currency. Bodies Bodies Bodies wants to pick apart this notion, but it also wants to mine it for humor. For a time, it appears to pull off this tonal balancing act before hoisting itself on its own petard. Shrouding itself in mystery, the film gives itself the appearance of obscuring a deeper meaning, but when forced to reveal itself, you learn quickly that there isn’t actually much below the surface.

Bodies Bodies Bodies is attempting to be two genres simultaneously: a murder mystery and a social satire. As the former, director Halina Reijn is actually quite good at creating suspense through the cavernous, shadowy nature of the setting as well as through ramping paranoia between the characters. As the latter, the film runs out of steam, deploying fish-in-a-barrel type jokes about the various characters’ vapid “wokeness” and material interests. The script is written by playwright Sarah DeLappe, based on a spec script by short story writer Kristen Roupenian (of notorious “Cat Person” fame). In its striving for commentary, Bodies Bodies Bodies actually talks itself into being a less interesting movie, which is all the more a shame since its ensemble cast is totally bought in on the premise.

The cast includes Amandla Stenberg as Sophie, a rich party girl fresh out of rehab who’s trying on sobriety while still maintaining relationships with the same paint-the-town-red friend group that has seen her worst days. Those “friends” are having a “hurricane party” in an isolated mansion (those scare quotes are my own, though they seem reinforced by the movie itself) far from the outer reaches of society. The anonymity of the locale is meant to further define these characters’ privilege; they can afford to literally get away from it all. Sophie brings along her new girlfriend, Bee (Maria Bakalova), a working class Eastern European immigrant with a sketchily-defined background. The mansion belongs to David (Pete Davidson, the unquestioned LVP of the cast), who even among this group is profoundly wealthy.

David and Sophie have a long, storied relationship with equal doses of affection and tension. David’s current girlfriend, Emma (Chase Sui Wonders), isn’t thrilled to see Sophie’s arrival, nor is Jordan (Myha’la Herrold), both of whom are still scarred by unknown events within recent memory. The one welcoming presence is Alice (a hilarious Rachel Sennott) who hugs Sophie enthusiastically, and comments on “how long” it’s been since they’ve seen each other. Another ominous presence is Greg (Lee Pace), Alice’s much older companion. Greg’s gregarious personality – and his seeming denial of being decades older than everyone else – unsettles David, who is desperate to keep his alpha status amongst the group. Threatened, David is petulant, quick to demean anyone present, including the vulnerable Emma, further teetering the unstable environment.

The group decides to play “Bodies Bodies Bodies”, a roleplaying party game of psychological warfare. It involves turning out all the lights and attempting to solve a fake murder mystery. It’s obvious that the game will only exacerbate unspoken tensions between them, but they proceed anyway. As the night goes on, the line between fake murder and real murder begins to blur, and actual bodies start to materialize. When the hurricane knocks out the electricity (and the phone service along with it), the night descends into accusatory chaos. Fragile friendships crumble and long-held secrets reveal themselves. The clarity of life-threatening danger unmasks the flimsiness of their performative virtue.

The first half of Bodies Bodies Bodies is a tremendously watchable horror comedy. Seen mostly from Bee’s outsider perspective, the ensemble becomes an excellent facsimile of an insecure friend group. Hurtling passive aggression at each other from the jump, Bee and the audience scramble to untangle the hierarchy as it is and as it was. Sophie’s past indiscretions juxtaposed against the rest of group’s current wild behavior adds to the delirium – how much worse can Sophie could have possibly been? It makes complete narrative sense that this night would end in homicidal carnage and it feels like genre necessity that they all turn against one another, but as the body count rises, DeLappe’s script becomes more contrived, contorting itself to deliver its message instead of supporting its characters.

It’s the lack of specificity that gives it away. The stories we get of Sophie’s pre-rehab hysterics, Bee’s cloudy history, or even Greg’s untoward presence, are all delivered with vagueries that do little to explain who they are as people. Perhaps the point is that DeLappe, Roupenian, and Reijn don’t see these characters as people, but a satire needs to have a better understanding of its target if they want the takedown to be successful (take the Coen Brothers, or even Rachel Sennott’s previous film Shiva Baby from 2020). As it stands, the second half of Bodies Bodies Bodies becomes about swinging at low hanging fruit, diluting the characters – specifically the women – into cliches of destructive self-importance. It doesn’t seem to matter that their behavior makes little sense, as long as the point is made.

Halina Reijn directs the film with lots of style, shooting a good portion of the film with no more than a flashlight. Alice’s glow stick necklaces and bracelets are used to both comedic and dramatic effect. Stenberg and Bakalova excel in their dual insider-outsider co-lead performance, even if the movie can’t really decide which of them is the real protagonist. Wonders and Herrold are giving it their best despite the knots of mangled script their tasked with delivering. The true stars are Sennott, who is the only person to pull off the compound sincerity-and-sarcasm that the script aspires to, and Pace, whose menacing Greg gives the film a much-needed boost of unpredictability. As for Pete Davidson, I can only say I’ve never seen a performer with such little charm or screen presence get so much press.