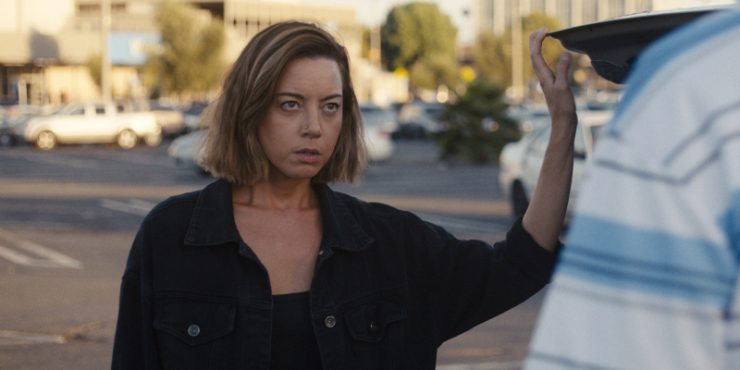 The post-Parks and Recreation career of Aubrey Plaza has been exponentially more interesting than I ever could have predicted. In between the occasional Hollywood paychecks of Dirty Grandpa or Mike and Dave Need Wedding Dates, she has been taking leading roles in many small (in some cases, microscopic) indies that have allowed her to evolve from a one-dimensional actress with a dry affect and into a compelling performer. Life After Beth, Ingrid Goes West, and Black Bear were evidence that Plaza was looking to be taken more seriously. Her latest film, Emily the Criminal, proves that she has turned the corner into becoming a full-blown acting talent.

Plaza plays the titular Emily, a woman in her thirties struggling to find steady work amongst crippling student loan debt. She does deliveries for a commercial catering company in Los Angeles, lugging aluminum containers filled with overcooked pasta into conference rooms for corporate lunches. Her economic situation in tenuous, borderline disastrous. One of the reasons she can’t find more stable employment is her criminal record, which includes a victimless DUI and a not-so-victimless aggravated assault charge. When job interviews aren’t derailed by the sordid details of her past, it’s usually Emily’s temper that gets in the way. Resentful of the state of her life, she’s quick to take the offensive against those who may judge her.

When a co-worker tips her to a job that can make her quick cash, Emily decides to scope it out. She ends up in a crowded warehouse filled where her ID is scanned and her picture is taken. A charming young man named Youcef (Theo Rossi) explains to everyone there: they will be given credit cards and use them to purchase flat screen TVs. Afterward, the TVs will be collected and everyone will get paid $200. Someone asks the obvious question: is the credit card information stolen? The answer is obvious. Nearly everyone stays, buys their merchandise, and collects their cash. When Youcef offers more money for less clean-cut work, all of them say no thank you. Intrigued by the prospect of more cash, Emily is the one who decides to say yes.

It’s not long before the darker side of this world reveals itself. All in the film’s first half, Emily gets punched in the face buy one aggrieved vendor, and shortly after, a thief holds her to the ground with a boxcutter blade shoved against her neck. The job is not without risks, which arrive swiftly and immediately. Despite it all, Emily gets quickly comfortable, weaving through the shady characters and treacherous scenarios. Further attempts at legitimate employment are sabotaged as she becomes intoxicated by the prospect of fast, dangerous money. Youcef decides to give her the equipment to start manufacturing her own cards and provides her with stolen numbers – he also gives her a stun gun for protection. Emily has dreams of no debt and world travel, but in finding this scheme, she also finds something she decidedly likes to do.

Writer-director John Patton Ford (in his feature debut) gives us a noir seeped in 2022 anxieties, where the pressure of a system set up for your failure finally boils over. (In a cameo, Gina Gershon shows up as a woman espousing the virtue of unpaid internships.) Emily’s economic hardship is the major motivation for her sudden turn to crime, but Ford is a clever enough storyteller to show us that she also enjoys the thrill, making her the perfect femme fatale for this blistering suspense film. Even her eventual romance with Youcef is colored by the world he’s brought her into. In a society that has straight-jacketed her into perpetual poverty, a fraud plot which subverts that society becomes very attractive. There is a political point-of-view but Emily the Criminal‘s main focus is always on the peril of Emily’s situation, which escalates quickly and to a frightening degree.

Plaza gives a level of commitment here not before seen from her. Her East Coast accent and the physicality of certain scenes demonstrates a technical level of performance she’s not previously displayed. Her seduction and eventual manipulation of Youcef is played so naturally. You never believe that it was pre-meditated, but it’s no surprise that her main priority is herself. More than anything, it’s a role that asks her to abandon nearly all the quirks that have made her such a popular comedic presence. Even in her moments of wit, Emily’s fierceness feels present and heavy, reminding the audience that her life is an unending parade of tension and indignation. This is a far step from April Ludgate and it’s the most convincing film performance Plaza has had to date.