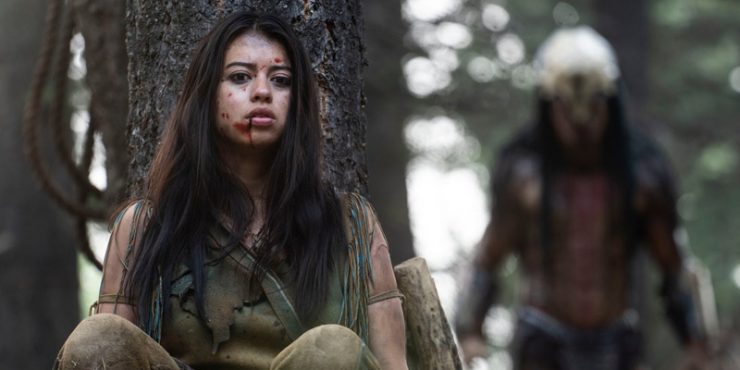 The Predator has traveled throughout the film series. He’s been to the Central American jungle, he’s been to 90’s gangland Los Angeles. He’s fought the xenomorph alien from Alien both here and abroad. One place he’s yet to be is the past, which is what separates the latest film, Prey, from all that came before. The setting is the Great Plains in early eighteenth century America. A Comanche tribe is settled within the scenic Dakota valleys, hunting what they eat and staying clear of dangerous animals – like bears and mountain lions – that can hurt them. It’s a patriarchal community. All the hunting and protecting is done by the valiant men while the women keep at home, preparing meals and creating medicines to address the men’s wounds. This sits well with everyone except Naru (Amber Midthunder), who yearns to hunt with the men.

Naru’s brother, Taabe (Dakota Beavers), is the pride of the tribe, the fiercest hunter and the bravest fighter. He’s more supportive than others of Naru’s ambitions, but he has his limits. When Naru claims to see a thunderbird in the sky, no one believes her. When a member of the tribe goes missing, everyone assumes it’s a nearby lion. Only Naru thinks that it may be the strange vision she saw shooting through the clouds, an unknown harbinger of doom that presents never-before-seen danger. Most of Prey consists of Naru gaining the confidence and skill to be a successful hunter while also witnessing the brutality and the shrewd strategy behind this unknown force. This predator may not be as sophisticated as others – less equipped with futuristic gadgets – but its ruthlessness still knows no bounds, and Naru has limited time to learn how to defeat it.

Prey is more of a “for the fans” film than its most ardent supporters would have you believe. As someone whose only connection with the franchise is a single viewing of the original 1987 film, I struggled with being that in awe of the predator and his creative ways of hacking human bodies into pieces. I was much more enamored with the performance of Amber Midthunder, who takes an ankle-deep character and turns her into a striking modern heroine. Director Dan Trachtenberg (who shares a story credit with writer Patrick Aison) is a clever crafter of action set pieces, and his skill shows more brightly when he gets to show practical combat as opposed to watching the Predator decapitating French fur trappers and blowing off limbs. Midthunder has the goods to be an action movie star, and one will hope those in charge will take notice.

The decision by 20th Century Studios (and their parent company, Disney) to completely forego a theater run and to unceremoniously dump this on Hulu feels like complete folly. Even as someone who’s an admitted Predator agnostic, I can see the potential this had to be a blockbuster. It’s a harrowing time when even our most beloved film franchises can’t even get guaranteed movie screens, especially a submission as unique as this one. The decision to place the setting in 1719 is simple on its surface, but opens up roads that many stale film franchises refuse to go down. It’s a tinge of old Hollywood, taking your monster on a cinematic tour of the world, and seeing how it reacts. In Prey you have a movie that’s already won over the fans in no small part because of its ability to evolve.