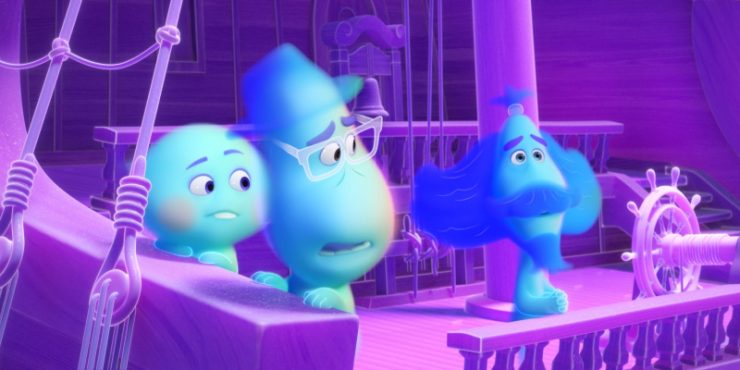 Pixar’s skill for selling you sentimentality without making you feel cheap is unmatched in Hollywood. Their films offer platitudes about the affirmations of life and maximize emotional effect by zeroing in on humanity’s small beauties. It’s a brilliant recipe for commercial filmmaking, but it’s also a brilliant recipe for good movies. After nearly a decade and a half of perfection, Pixar has stumbled for the last ten years, occasionally churning out their usual quality (Inside Out, Coco) while occasionally falling into the morass of mediocre sequels to their earlier classics. Their latest venture, Soul, is a back-to-basics standard, mixing astonishing animation with a tight, affecting story.

It’s interesting that Pixar’s last three non-sequel films have in some way dealt with mortality (Coco, and Onward from earlier this year). Soul completes an unofficial post-life trilogy where arguments are made for the graces of everyday life and the tranquility of embracing your individual experience. It could be that Pixar’s broad storytelling ambitions left it with little left to tell about pre-death life. In Soul, the main character, Joe Gardner (Jamie Foxx), goes back and forth a few times between being dead and alive, in different variations. In life, he’s a middle school music teacher, who patiently guides uninterested students through off-key, out-of-tune versions of “America, the Beautiful” (and in one clever sequence, a much less grand version of the Walt Disney theme).

Joe is middle aged. When the school offers to bring him on full time, it’s the first time that he’s ever had that option. His life has mostly been chasing the dream of becoming a famous jazz pianist, much to the chagrin of his mother (Phylicia Rashad), who just wants her son to have stability. He’s hesitant to accept the full-time position. Is he closing his window? Announcing the end of his chances of being the next great jazz musician? Serendipitously, soon after the offer, he gets a call from a former student (Questlove), who says that Joe has a chance to audition for famed jazz saxophonist Dorothea Williams (Angela Basset), and be a part of her backing band. It feels like a dream come true. Despite his advanced age and shabby clothes, Dorothea is enamored by Joe’s soulful playing, and decides to bring him on. Joe’s big break is on the way. Until he falls into an uncovered manhole.

It’s the kind of physical comedy that Pixar excels at; it’s funny because it’s expected. It’s also the moment when the movie truly begins. Joe ends up falling deep into a monochrome chasm, seemingly floating until he lands on a translucent conveyor belt, his body changed into a rounded off, glowing globule. He learns quickly that he has in fact died, and the conveyor belt is taking him to the Great Beyond. In a panic, still hoping to make the Dorothea Williams concert on Earth, Joe escapes the Great Beyond, only to land in the Great Before where souls are guided to their preferred personalities before being born on Earth. The Great Before is run by several cubist abstractions all named Jerry (voiced alternately by Alice Braga, Richard Ayoade, Wes Studi, among others). Seeing Joe, they mistake him for a Mentor sent to help budding souls before their eventual trip to human life.

Soul borrows from a handful of existential dramedies (Albert Brooks’ Defending Your Life will always be an under-sung contribution to this sub-genre), to come up with what it has here. Even some of the structure from previous Pixar films makes an appearance, specifically the opposites attract buddy comedies (Inside Out, Up). This is in the form of Joe’s mentorship of Soul 22 (Tina Fey), a soul that has spent centuries avoiding ever having to go to Earth, despite mentorships from figures like Mother Teresa and Abraham Lincoln. 22 is brash, obnoxious and has a flair for getting mentors to give up on her. Despite a total lack of interest in becoming human, 22 decides to work toward achieving a passage to Earth. If she gives her passage back to Joe where he can return to his body, maybe she can finally escape millenniums of expectation that she will become human.

Hijinks ensue, including but not limited to: Joe’s soul ending up in a cat, 22 ending up in Joe’s body, and the participation of a sign-spinning (possibly drug using?) spirit guide (Graham Norton) who attempts to sort it all out. A character named Terry (Rachel House), the afterlife’s sinister accountant, searches desperately for Joe’s soul as the numbers for The Great Beyond are off; becoming the film’s closest facsimile to any kind of villain. All the plot – and there’s a lot of it – is all just window dressing for what Soul is really trying to sell: appreciation for the fleeting moments of everyday life. As corny as that sounds, Soul does manage to pull it off in 2020 without feeling ridiculous. A lot of this comes from the strength of Foxx and Fey’s voice performances which fit perfectly into Pixar’s usual salty-sweet balance. Their budding connection, albeit a stretch, comes off as genuine.

Director Pete Docter has become one of the heavier hitters in Pixar’s stable of filmmakers (Monsters, Inc., Up and Inside Out are his other features), and with co-director Kemp Powers, he makes Soul his most visually stunning movie yet. The contrasts between the precision of Joe’s New York City and the abstractions of the Great Before meld perfectly together, creating a delectable sensory experience. Set to the tones of Trent Reznor and Atticus Finch’s searing score, Soul is wondrous (their’s also a heavy dose of good diegetic music throughout). The film’s story (screenplay by Docter, Powers, and Mike Jones) is a bit convoluted, frequently turning its plot over on itself. It doesn’t have the directness or the clarity of Up or Inside Out, but it does deliver in its animation which fills the screen with beautiful textures and colors.

Much like the jazz music it cherishes, Soul benefits from its simpler moments and becomes muddled when its complications start to add up. When its expressions of human emotions are most stripped down, they become most effective. Not since Ratatouille has a Pixar movie more languished in its recreation of sensory reaction. That film was attempting to translate taste. Soul is trying to not only display our singular experiences with music, but out experiences with all the things that make us happy and that make us who we are. There’s nothing profound in Soul, and that’s kind of the point. Sometimes life itself is all you need.