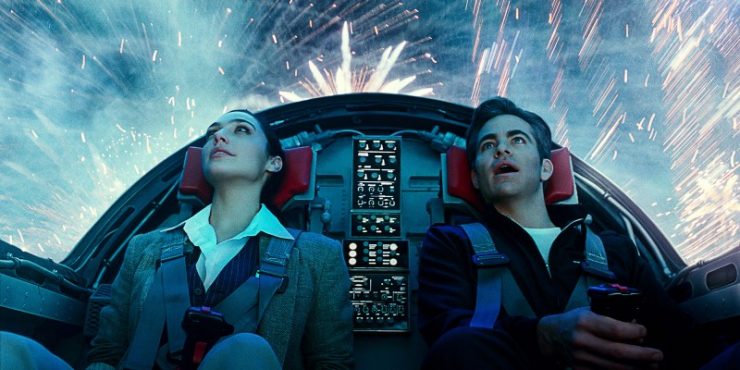 I’ve relented in my personal battle against superhero movies. They’ve taken over cinematic pop culture to such a degree that a pandemic-plagued year without them made the public feel like there were no movies at all (there were, and good ones!). Lucky for us all that Wonder Woman 1984 comes just before the close of the year, the regal star atop our buckling 2020 tree. Movie theaters being mostly abandoned starved us of the blockbuster spectacle (not sure if whatever happened with Tenet counts or not), but Warner Bros choosing to release WW84 (as it’s been so named in all of its advertisements) in theaters and HBO Max simultaneously was not only a sign of a major industry shift, but a chance for us to recreate the group experience of a box office weekend. We would all be going to see the same epic studio film at the same time.

WW84 is a flop in most departments, but not in its promotion. Warner turned Gal Gadot’s Diana Prince/Wonder Woman into the superhero that was going to save the movies. The posters and trailers promoted popping colors and clever design, 80’s fashion and beautiful movie stars. This isn’t the first blockbuster to disappoint. It probably isn’t even the most disappointing movie to come out of DC, the grumbling little brother to the over-achieving Marvel. But this is a bad movie. A piece of camp in the truest definition of the word. There isn’t a second thought given toward the story making sense or even having functional action set pieces. Even the film’s attempt to reach toward its audience’s humanity feels like high parody. Having the same wide-scale streaming release as Pixar’s Soul sets it up as a massive failure in the commercialism-masquerading-as-existentialism department.

It makes the biggest mistake that a superhero movie can make: becoming too enamored by its main character’s excellence. When these movies become so drunk on the supremacy of their protagonist’s greatness it feels like there’s very little a story can go. Vulnerabilities are produced out of necessity and they hardly feel organic to the character. Consider WW84‘s opening sequence, where a child Diana Prince (played by Lilly Aspell) tries to cheat her way toward beating grown Amazons in a grueling physical competition. She’s disqualified but the young Diana is defiant, feeling she is the true winner. Is this some kind of parable? Is there anything in the 2017 Wonder Woman or, in fact, anything in WW84 that suggests Diana Prince’s proclivity for shortcuts and winning at all costs? Or is that just what this specific screenplay needs her to do?

This screenplay (written by director Patty Jenkins, as well as Geoff Johns and Dave Callaham) is filled with flimsy set-ups for major plot developments. The main one is the “Dreamstone”, a large citrine crystal infused with mythical powers by an ancient and spiteful demigod (I don’t remember his name, but I’m sure he’ll show up in a future movie). Wrapped in an iron band inscribed with Latin, the Dreamstone can grant any wish for those who possess it. This makes it a highly coveted object for anyone who knows of its power. One of those people is Maxwell Lord (Pedro Pascal), a charismatic business man with bleached hair and a huge ad buy on television. Lord’s business, an oil speculation firm called Black Gold, is failing miserably despite Lord’s talent for gaudy appearances. Grasping the Dreamstone is his last chance to wish his way into success.

The stone’s power is unmatched, granting any request no matter how large. This includes Diana wishing for the resurrection of Steve Trevor (Chris Pine), her lover from the first Wonder Woman, who died decades earlier. Steve does return, albeit in a different man’s body (the movie does a Whoopi Goldberg/Ghost possession routine, except instead of a single scene, it’s for the whole movie). The stone also gets into the hands of Barbara Minerva (Kristen Wiig), a bookish gemologist who covets Diana’s jaw-dropping beauty and effortless authority. She gets her wish too, except she doesn’t plan to use her newfound strength and glamour with the best intentions. Lord’s ambitions with the stone are even grander, wishing himself to become the stone (I don’t know if this plot point is a spoiler; if it is, too bad), in a scheme to amass power by making people’s dreams come true.

So you can see what Diana is up against: vanity and selfishness, power harvested through deceit, her boyfriend ensnaring the body of a total stranger. There’s… a lot to go through here. WW84‘s mountain of plot gets you from A to the end of the alphabet, but not without many questions, the simplest being: why can’t a superhero simply fight a bad guy anymore? The absolute bananas nature of its premise leads the film into silliness which is usually a good thing for superheroes, but WW84 is still grasping for gravitas. Its self-awareness can’t exactly save it, especially in a final act that takes the Dark Knight which-boat-will-you-blow-up moral dilemma and extrapolates it to a hysterically large level (that one I won’t spoil, it’s too funny!).

It’s amusing to me that this film is set in the 1980’s. Like most 80’s period pieces, they make hay out of the outfits and the hair (usually the music too but WW84‘s soundtrack is lacking any of the period’s standards). Spiritually, this film is straight out of the 1990’s, where Hollywood action films became mindless spectacles, overblown testaments to the studios’ willingness to outspend each other in search of films that had no soul, no integrity, and mainly functioned as commercials for merchandise. The action movies of the 90’s seemed to purposely obfuscate the moral ambiguity and the political provocation of 80’s movies like Predator or Escape from New York. They wanted to replicate Robocop without understanding any of that film’s satire, and taking it at face value. Even the truncated “WW84” promotion recalls Independence Day‘s iconic “ID4” campaign. A lot of those soulless films from the 90’s went on to become some of my favorite films as a child. Joel Schumacher’s Batman Forever caught much-warranted flack for its total abandonment of substance, but I loved it when I was five.

In a way, WW84‘s return to that kind of carelessness is a tad refreshing. It literally tries to distract you with fireworks as a means to lead you off the scent of its own preposterousness. I’m not a child anymore, so I didn’t get much of anything out of this movie. It is high fructose corn syrup, an unbalanced diet not unlike your average Christmas spread of cookies and hot chocolate. It’s also unconscionably stupid; its few ounces of wit are squeezed out of the whimsical performances from Pine, Wiig, and Pascal. Gadot, the film’s star, has – I hate to say it – no talent for carrying a movie, let alone a franchise. I doubt any of that will matter in the end, because even DC’s persistent mediocrity has failed to dampen the comic book’s grasp on cinema. But this is watered down, a mindless entertainment that banks on you returning to the emotional maturity of a child to enjoy it.