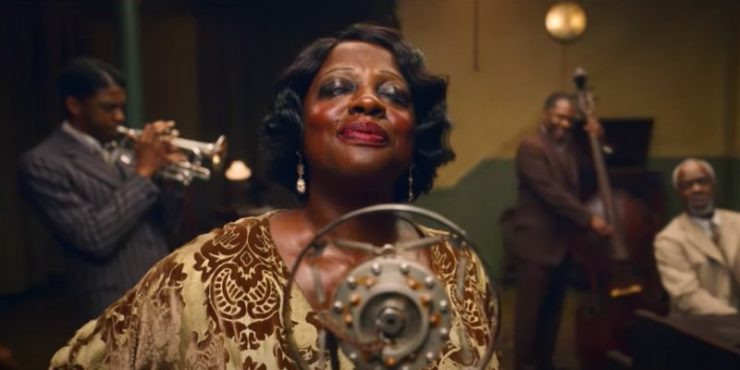 Ma Rainey’s Black Bottom opens with the image of two Black men running through the nighttime forests of the American South. As they journey through the thick trees they come upon some torches. Right at the moment that our minds create the worst case scenarios of their predicament, the film reveals that these torches light the way toward the main attraction: the tented performance of Ma Rainey (played exquisitely by Viola Davis), the Mother of the Blues. This opening sequence not only misdirects the audience’s expectations, but also illustrates Ma Rainey‘s own defiance against that expectation. There’s a certain tenor to mainstream period pieces about Black historical figures, and director George C. Wolfe, right from the start, forces us to examine what we anticipate.

August Wilson’s play of the same name is the exceptional source material, and while Ruben Santiago-Hudson’s screenplay adaptation is fantastic, it excels by keeping Wilson’s tense, real-time structure, humming beautifully to a rhythm akin to a live performance. Wilson’s plays are at the pinnacle of Twentieth Century theater, and their focus on the under-seen portions of Black life still give a strong rebuke against the entertainment industry’s long tradition of propping up black respectability. Exceptionalism is not within Wilson’s interest, though he’s not afraid to show it. The pure power of Ma Rainey’s voice and performance is on full display throughout Black Bottom, but the play – and this film – is more enamored by what makes her, and her loyal core of musicians, a true individual.

Strength and dignity were a calling card in the collection of roles that led Viola Davis to the heights of film and television stardom. Even her Oscar-winning performance in Fences (another Wilson adaptation), she played the sorrowful, played-upon wife with a high level of nobility. Ma Rainey may be the complete opposite. From the moment of her arrival, Ma is brash, confrontational, and unbending.  The film takes place over a single recording session, which Ma arrives late to. Her subservient (white) manager, Irvin (Jeremy Shamos), does anything that she asks, no matter how petty or extravagant the request. This rattles the recording studio’s owner, Mr. Sturdyvant (Jonny Coyne), who is over Ma’s diva routine. He wants the work done fast, efficiently, and without incident. But Ma’s got other plans.

Davis’ screen-scorching performance is ferocious, a compound of resentments and entitlements. The Mother of Blues, she takes devilish pleasure in treating all those around her as her disobedient children. This doesn’t stop with the white men in charge, but also trickles down to her backing band, who more or less bow to her every word in exchange for the prestige and the consistent gig. Trombone player, Cutler (an excellent Colman Domingo), keeps a smile pasted to his face which hardly hides his inner frustrations, while bass player Slow Drag (Michael Potts) and piano player Toledo (Glynn Turman), a bit older and a bit more content, try their best to play their notes and keep to themselves. It’s the new, young trumpet player, Levee (Chadwick Boseman), that begins causing the trouble.

Levee is an exquisite horn player and song writer, who has ambitions of starting his own band and mimicking Ma Rainey’s level of success – as well as mimicking her ability to talk down to white folks. He sees this backing band as the train, while the other three musicians know that it’s the station. He is a showman and a braggart, a couple of traits that only Ma is allowed to possess during this recording session. The tension starts between the band members, as they do their best to get Levee in line with how it goes, but then the heat comes when Levee and Ma finally work together, and she has no use for his flair for extra notes and high-tempo rhythm. Levee thinks he’s the future of the blues, while Ma just thinks he’s ruining the classics.

I’m not going to pretend like it’s even possible to detach the profundity of Boseman’s incredible performance from the tragedy of his sudden death in August. Boseman was a consummate professional packaged as a movie star. Even his trip along the carousel of Great Men (Jackie Robinson in 42, James Brown in Get On Up, and Thurgoood Marshall in Marshall), he always served his films more than he served himself. This is most evident in his biggest role, Black Panther, where he took no opportunities to outshine the ensemble, and made that one of the greatest of the Marvel films. His Levee in Ma Rainey’s Black Bottom is a fiery part that Boseman fills in completely. Finally, Boseman is given a chance to fully shine, and in his final role, he probably gives the strongest performance of his career.

Director George C. Wolfe does an excellent job of keeping Ma Rainey cinematic while maintaining Wilson’s tightly-wound theatricality. Outside Davis and Boseman, the entire ensemble is tremendous, layering the egos of Levee and Ma with varied forms of anxiety and wisdom. In an odd, truncated year, this is easily the best ensemble performance I’ve seen in any 2020 film. Wolfe and his cast have no issues dwelling in Wilson’s outsized drama or lingering on his epic monologues. In fact, they revel in it. This is a movie that fully embraces the restriction that a really good play can put on a film, and flips it to its advantage. It also understands the power of its cast – led by the brilliance of its two stars – and gives no illusion as to who is the main attraction.