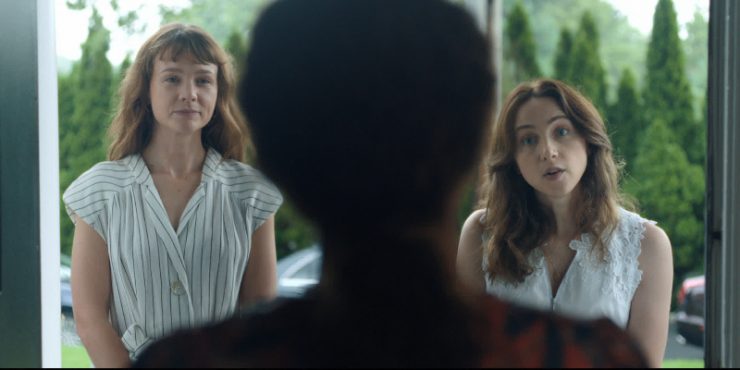 The empire of Harvey Weinstein was built upon the idea of prestige. Weinstein and Miramax were a symbol of high artistic standard – in simpler terms, he ran successful Oscar campaigns. While his brother Bob reeled in big cash with genre schlock like Scream and She’s All That, Harvey was the front-facing figurehead of Miramax’s awards season success in the 90s and 00s, including Best Picture wins for The English Patient and Shakespeare in Love, not to mention iconic promotional campaigns for modern classics like Pulp Fiction and Chicago. This is heavy, heavy pedigree for a distribution company in which Weinstein received substantial amounts of credit (many acceptance speeches from some of our most beloved stars and filmmakers in this era include his name). So there was a large foundation of protection against revealing his numerous acts of sexual harassment and assault. She Said is a film about all it took to surmount that and bring him down.

Conflicts of interest abound throughout She Said, but perhaps the largest friction is how it attempts to be the kind of awards season fodder that Weinstein was so famous for producing. Perhaps this isn’t fair; after all, Weinstein didn’t invent the adult drama, though its success did peak in Weinstein’s most fruitful period. Amongst the producers on She Said is Plan B Entertainment, which is the company founded by Brad Pitt. Pitt has his own history with Weinstein, both good and bad, not to mention Pitt’s own controversies concerning his alleged abuses of his ex-wife, Angelina Jolie (who herself has waged one of the many accusations against Weinstein as well). So, you can see how Hollywood trying to make a movie about its own toxic work culture toward women can end up producing something that ties itself into a knot aspiring to both journalistic integrity and unimpeachable virtue.

Maria Schrader directs, her second feature after last year’s I’m Your Man, a charming rom-com between a museum functionary and an AI robot. That movie has some funny notes about twenty-first century romance but its commentary was mostly on the surface. It’s a movie stabilized by terrific acting, which is also true about She Said, which enlists a stellar cast and provides them with opportunities to create gripping and heartbreaking performances. The movie’s script (by Rebecca Lenkiewicz) is based on the book of the same name about New York Times investigative journalists Jodi Kantor and Megan Twohey (they wrote the book with Rebecca Corbett). Zoe Kazan plays Kantor, a mother of two, married to a fellow Times writer, who reports on workplace misconduct. Carey Mulligan is Twohey, a new mother whose reporting on Donald Trump’s history of harassment blew wide open prior to his eventual election in 2016.

Kantor admires Twohey’s ability to get abuse victims to go on the record, but Twohey is still scarred by Trump’s ability to overcome it all and still make it to the presidency. It’s up to Jodi as well as editors Dean Bauqet (Andre Braugher) and the aforementioned Corbett (played by Patricia Clarkson), to get Twohey on board. Together – Kantor is gentle and empathetic, Twohey is direct and fierce – they collect stories from various women outlining a pattern of behavior. Some women are famous stars like Gwyneth Paltrow and Ashley Judd (who plays herself here), but most are unknown assistants and production assistants. Some stood up to Harvey and reaped the professional consequences, like Zelda Perkins (Samantha Morton in an incredible one-scene performance). Others succumbed to his wishes, abused and helpless, like Laura Madden (Jennifer Ehle). Some of these women were given settlements riddled with NDA stipulations, cash payouts to ensure their silence and maintain Weinstein’s reputation.

A lot of this is well-known. After all, this was only five years ago. Part of what feels off about She Said has to do with the closeness many of us will still feel with the subject matter. Schrader is forced to make a lot complicated decisions. Judd’s few scenes as herself are very moving, and a reminder that the fallout of Weinstein’s monstrous behavior has left many still wounded. But other major figures are obfuscated. Rose McGowan and Gwyneth Paltrow (not to mention Weinstein himself and Donald Trump) are recreated with voice actors and heard over a phone. The ways in which She Said is recreating some elements while actualizing others gives the film an odd feeling. It’s very possible that this is a victim of bad timing, but making a movie about how the movie industry is an inherently dangerous place for its female employees feels uneven, and making Weinstein a monolithic bogeyman might create shade for the other abusers still among us.

The performances in this movie are across-the-board good. Morton and Ehle are particularly fantastic in small chunks, and they get across two singular but conjoined reactions to Weinstein’s horrifying behavior. The movie’s ending gives us a title card espousing the effect of Kantor and Twohey’s reporting, that it was the catalyst of the #MeToo moment that is still creating shockwaves across industries around the world. This is all true (though if you want to valorize Twohey, I’d suggest avoiding her latest NY Times reported piece which sparks skepticism of gender-affirming procedures, a piece that some activists say mirrors transphobic language), and She Said is smart in presenting the small scale of their person-to-person work. Kazan and Mulligan, two actresses of particular renown and talent, perform well separately, though they struggle to find chemistry together, perhaps a metaphor for the film itself: inspiring individual moments of greatness that add up to something just short of it.