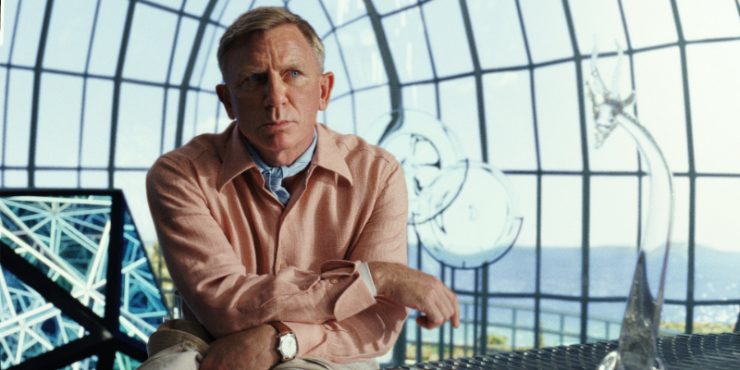 Perhaps the most notorious line in the Lennon-penned Beatles song “Glass Onion” is “Well, here’s another clue for you all… the walrus was Paul”. The lyric is considered a smoking gun confession in the deep state “Paul McCartney is dead” conspiracy theory, a well-known, ludicrous, and ultimately very entertaining fictional plot line that has permeated a particularly obsessive subset of Beatles fans since the mid-60’s. So it would makes sense if Rian Johnson reverse engineered the entire plot of Glass Onion from the notion of that single line, and paid the ultimate homage in naming the film after the song. If that seems far-fetched then you probably haven’t seen the movie yet. Johnson’s follow up to Knives Out is working on a much larger scale, and never misses an opportunity for easter eggs and references to pop music, detective literature, noir cinema, and of course, offers a plurality of clues to the mystery at its center.

It’s almost impossible to discuss the plot of this movie without spoiling any one of the many joyful surprises that happen throughout. I don’t think I’ve ever seen a movie with quite so many stunt cameos littered throughout, each giving the film a comedic jolt and a reminder of the larger playing field that Glass Onion has compared to its predecessor, thanks it part to a big Netflix payday after Knives Out‘s massive box office success. Glass Onion completely resets the template, replacing the entire cast with the sole exception of Daniel Craig’s Benoit Blanc, the suave detective with the deep fried country accent and a preternatural talent for observation and deduction. Like the greatest detectives of cinema and literature, Blanc seems to have a knack for stumbling upon the kind of murderous situations that will eventually require his services. This time it’s a secluded island off the coast of Greece named Glass Onion.

Glass Onion is a palatial estate owned by tech billionaire Miles Bron (Edward Norton, at his empty scumbag best), a vainglorious man whose obscene wealth has garnered him a level of power and influence which allows him to manipulate many, including his varied group of close friends who all find themselves depending on him in various ways. This includes Connecticut governor Claire (Kathryn Hahn) whose campaign for the US Senate is fully funded by Miles. There’s also Birdie Jay (Kate Hudson), a former fashion model turned designer whose career is continually derailed by chronic foot-in-mouth disease, but whose clothing line gets Miles’ healthy investment. Lionel (Leslie Odom Jr.) is one of the top scientists at Alpha, Miles’ monolithic company, and also the person tasked with okaying Miles’ more controversial plans. Duke (Dave Bautista) is a men’s rights YouTuber gaining media influence thanks to… you guessed it.

Miles invites all of them to spend a weekend at Glass Onion for a “murder mystery party”, an elaborately constructed and strenuously planned game of wits meant to last the whole weekend. It’s more a showcase of ego and stature than a low stakes competition between friends, but out of financial and social obligation, they all come. Some, like Birdie and Duke, are more than happy to soak in Miles’ opulent excess, while Lionel and Clare know that they are playing along against their better judgment. Birdie brings her put-upon personal assistant, Peg (Jessica Henwick), and Duke brings his girlfriend and YouTube co-star, Whiskey (Madelyn Cline). They’re all surprised to learn that Benoit Blanc has been invited as well, chalking it up to a particularly ostentatious touch by Miles, inviting the world’s most famous detective to his “murder”. But the most shocking arrival is Andi (a phenomenal Janelle Monáe), the co-founder of Alpha with Miles who was only recently forced out through aggressive litigation.

But Blanc is not the most shocking arrival. That’s Andi (a phenomenal Janelle Monáe), the co-founder of Alpha who’s recently been forced out of the company through aggressive litigation. The court case made Andi an outsider among the friend group, and her presence gives the proceedings a touch of tension, a sign that the weekend is not exactly what it seems. Like Knives Out, Glass Onion performs a narrative slight of hand, which has become something of Rian Johnson’s specialty. That he’s done it so successfully (and uniquely) for two films in a row is impressive. Stalking the perimeter of the estate, Blanc obseves the friends – or frenemies – and things become clear: Miles has filled his house with people who all have proper motive to actually murder him. Are his suspicions warranted or is he another person falling for for Miles’ gauche parlor games? When, as you might expect, an actual murder finally does occur, things spiral further out of control.

One of the delightful surprises of the first Knives Out is that Craig’s outlandish Benoit Blanc becomes a sideshow, while Ana De Armas’ nurse gets foregrounded within the intrigue. Glass Onion plays out in a similar vein, and an hour into the movie you’ll be surprised by who the film’s protagonist actually is. Watching Johnson’s screenplay unfold is most of the fun, so I’ll refrain from further elaboration here. The tautness of the first Knives Out‘s script was remarkable, a level of narrative precision that pays proper homage to mystery masters Dashiell Hammett and Agatha Christie. Glass Onion, getting hearty laughs and crowd-pleasing bombast, lacks that same level of precision. Many plot points will feel contrived because (well) they are, and the only way they can make sense is because (well) the script needs them to be in order to move forward. Johnson falls short of Knives Out‘s brilliance with Glass Onion but he doesn’t short change you on spectacle.

One could CinemaSins this movie to exhaustion is they wanted to, but that would be willingly avoiding everything else that’s fun about it. Mainly, the ensemble cast’s incredible, hilarious chemistry. Hudson is given the kind of comedic opportunity that she’s desperately needed for years, while Bautista continues to prove that his screen presence and timing are no fluke. Odom Jr. and Hahn’s workmanlike performances bring more than you might initially perceive, and Norton, as the megalomaniac billionaire, feels frighteningly cohabitant with current events. This brings me to Janelle Monáe, Glass Onion‘s wild card and skeleton key. This is certainly the biggest spotlight she’s ever received and she delivers a star-quality performance with a character that carries the film’s biggest narrative burden. She stands out amongst a solid ensemble that still includes Craig’s indelible Benoit Blanc. No easy feat.

Glass Onion is among the the more fun movies I saw in 2022. That it sacrifices some of the first film’s intelligence for a broader commercial appeal is keeping in line with most Hollywood sequels, but Glass Onion still has an auteurist’s identity, and still feels closer to art than your every day franchise film. Rian Johnson has worked within some of our biggest franchises (still the director of the best Star Wars film, in my view), and he understands how to leave his stamp while still giving the audience what they’ve paid for. There isn’t a frame of Glass Onion that doesn’t include some sort of cultural flashpoint or sight gag. Each detail is as meticulous as Miles’ ornate glass mansion. It’s the perfect holiday season movie, a clever script that leaves no audience member out of the loop. It’s also a Netflix film, which gives it that whiff of illegitimacy that even Martin Scorsese couldn’t overcome. Here’s to Glass Onion reaching the audience it deserves, on whatever screen they can find.