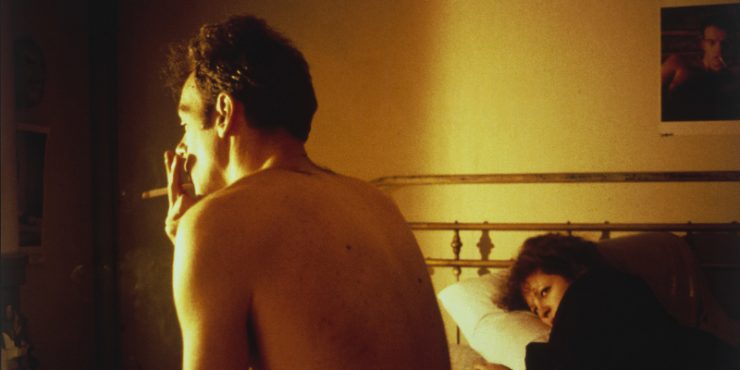 All the Beauty and the Bloodshed is part biography, part protest, part photo slideshow. The protagonist is groundbreaking photographer Nan Goldin, whose life is a constant battle between the hardships of her past, the emotional transparency of her art, and the passion of her activism. The genius of it all is how director Laura Poitras shows how intertwined all these aspects of her life are, creating a persistent tension that can only be eased by her camera or her political crusades. This engrossing, at times shattering, documentary is both intimate and incendiary, a vitriolic call for justice and a heartbreaking portrait of an artist who’s turned their anguish into real power.

Controversial from the moment she broke on the scene, Goldin’s photography is renowned for its candid portrayal of Manhattan in the 70s and 80s, particularly the seedy bowels of the Lower East Side and then later Times Square at the peak of its sordid glory. Getting her art shown has always been a fight, whether it be from gallerists or puritanical politicians who disdain the explicit content in her photos, or from friends and lovers who feel exposed by the revelatory nature of her work. Now in her sixties, Goldin has a new fight: against the Sackler family and their culpability in the 2010’s opioid crisis. A surviving Oxycontin addict, Goldin understands the unspeakable pain that has been caused by these prolific drugs. She knows that she’s lucky to still be alive, and now she wants to give that pain back to the Sacklers.

Poitras gets unlimited access to Goldin’s involvement with PAIN (Prescription Addiction Intervention Now), an advocacy group taking on the Sacklers’ company, Perdue Pharma, and their role in proliferating various opioids to doctors and hospitals despite knowing the dangers involved. The drugs have made the Sacklers obscenely wealthy, which has allowed them to buy legitimacy and launder their reputation through philanthropy, specifically in generous donations to the most famous art museums in the world, including The Met and The Guggenheim in New York City, The National Gallery in London, and The Louvre in Paris. Already the most high profile member of PAIN, Goldin chooses to use her own powerful position to attack the Sacklers from within the art world, participating in protests and die-ins within the wings and halls named after the family.

As we chart PAIN’s progress in removing the Sackler name from museums – and further, pursuing criminal charges against the family – Poitras intercuts sequences from Goldin’s past, narrated somberly by the artist herself and illustrated with the photographs both from her collection and her childhood. Her penchant for conflict began early, as she bristled against the suffocating confines of the suburbs outside Boston. Her rebellious spirit was gleaned from her older sister, Barbara, who ultimately committed suicide when Goldin was just eleven, a victim of the high-level dysfunction between their emotionally vacant father and frantic, insecure mother. This horrible tragedy early in life colors all the events that follow, the memory of Barbara looming large over relationships and creative decisions.

When speaking of her own life experience – her brief stint as a sex worker, her experience with domestic violence, the sorrow of many friends’ deaths during the AIDS crisis – Goldin is just as frank as her photographs, which lay bare the reality of her contemporaries and, she explains, explore the conflict between “autonomy versus dependency”. In her photographs, that conflict is usually shown through human relationships, but Poitras shows that this is a perpetual inner conflict as well. Goldin’s volatility, so useful when shouting down the Sacklers or a Republican government that stigmatizes AIDS while people die, can be a burden when trying to make human connections. Her life is littered with casual cruelties and betrayals, which has calloused her resolve and sharpened her anger against the monolithic entities that seek to exploit the vulnerable.

All the Beauty and the Bloodshed is a masterfully directed film, structured in seven chapters and perfectly illustrating the line that connects the personal and the universal. We learn about Goldin’s collaborators – which includes writer and actress Cookie Mueller, photographer David Armstrong, and the artist and activist David Wojnarowicz – whose own fights against convention ended in tragedy that further formed Goldin. We also meet author and journalist Patrick Radden Keefe, whose own book, Empire of Pain, took on the Sacklers and is a first-hand witness to their powers of intimidation. What this wide swath of people all have in common – despite unequivocal talent – is a need to fight against oppressive structures, and Poitras and Bloodshed are patient enough to show the virtues that come with these varied approaches.

Scenes of protest, whether it be PAIN laying on the floor of the Guggenheim in 2018 or ACT UP marching through the streets in the 80’s, are given their proper context and the solidarity shown is some of the most moving stuff I’ve seen in a movie this year. The film’s finale meditates between the triumph and the disappointment of small victories, and the ways we salvage our dignity in the face of monolithic evil. Goldin is recovering from a lot, and while Poitras’ film doesn’t lionize her as a photographer or an activist, it also doesn’t sell short the effect of her advocacy, trading in the solidity of art prestige for a less glamorous, but fully noble existence. Now, if you really watch All the Beauty and the Bloodshed, you understand that glamour has never been a part of her style anyway, but it’s still moving to see her level of commitment in fighting for those who don’t have the platform she possesses.