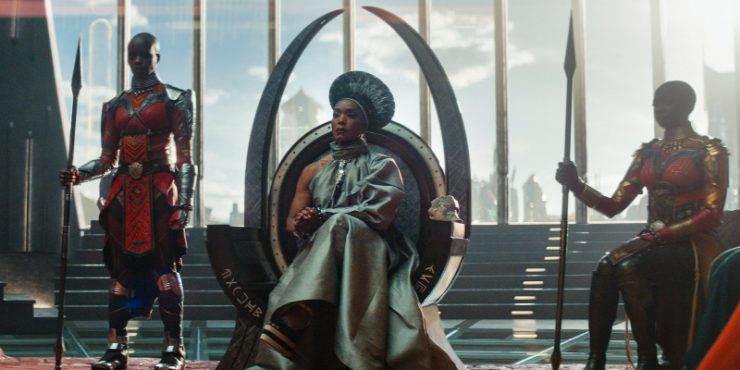 In the annals of doomed Hollywood epics, the production of Wakanda Forever has to be up there. After suffering the death of its main star Chadwick Boseman in 2020 – a presumably insurmountable hurdle for any movie – the film was then delayed by several COVID-related incidents, including a controversy surrounding the film’s new star, Letitia Wright, whose vaccination status is still unresolved. Needless to say, any movie coming out of these circumstances feels something like a miracle. This is only the fourth film from director Ryan Coogler, who in nine years has already established himself as one of the top commercial directors in the world. He hasn’t made anything since the first Black Panther in 2018, making Wakanda Forever a very welcome return.

It can’t be overstated how unburdened the first Black Panther was by the MCU at large. Free from the more macro narrative obligations that saddle so many of these Marvel films, Black Panther was free to stand on its own two feet, which is the main reason that its one of the few MCU films that actually feels like a movie and not a feature-length television episode. Much can be said (and has been said) about Marvel’s approach to long-form storytelling, but Black Panther proved that Coogler was a fierce filmmaker who wouldn’t be affected by larger corporate influence. Unfortunately, Wakanda Forever proves that Marvel’s too-big-to-fail mindset can morph even the most earnest talent to fit their whims. I think given more ideal circumstances, Coogler could have made another great standalone film, but that’s not what we get here.

Instead, Coogler smartly crafts Wakanda Forever into a memorial for its former star. Only appearing in brief glimpses of older footage, Chadwick Boseman is still the heart of Wakanda Forever, the guiding force not only in the story but in the performances and especially in the direction. The movie opens with Wright’s Shuri trying desperately to find a cure for T’Challa as his heart rate drops alarmingly low. Desperate in the face of tragedy, Shuri is stopped in her tracks when their mother, Ramonda (a fantastic Angela Bassett in a more expanded role), informs her of the horrible news: the Black Panther and king of Wakanda has died. There’s a non-specificity to it all – perhaps a product of hasty screenwriting, created in the face of force majeure – that allows Coogler to foreground the sorrow shared between the mother and daughter left behind.

And so the stage is set for Wakanda Forever to be a film about grief and the ways it permeates our souls. This feels pretty radical for a major Hollywood film, especially within a studio like Marvel, which seems allergic to anything like sincere human emotion (they prefer their feelings to be contrived constructions straight out of a Robert McKee seminar). Wright is asked to prematurely step into the central role, and indeed the film’s arc deals with her own misgivings about her place in the chain of succession. It’s not only her discomfort with wearing the suit of the Black Panther, but also her skepticism in Wakanda’s holistic spirituality. Shuri is a woman imbedded deep in the world of science and has never believed in the divinity that was central to T’Challa’s reign and Wakanda’s dynasty.

When Wakanda Forever plays its emotional notes well, it’s a hard film to resist. As an audience, our own relationship to Boseman can give us an effective, if saccharine, feeling, but Coogler’s film is always in good taste in that regard. And Wright, handling the difficult transition from the first film’s spunky comic relief to the dramatic center here, proves capable of handling the responsibility, however much we might miss the more light-hearted Shuri of the original film. Alas, at this phase of the MCU (phase four, for those keeping track), there is no room, and indeed no time, to tell a story with out force-feeding a Turducken of plot and character introductions. When the film isn’t giving a bereaved tribute to Boseman, it is constructing the off-ramp to the next phase of Marvel which, in that regard, is in bad taste.

The major reveal here is Namor (Tenoch Huerta), the king of Talokan, an underwater empire that thrives out of sight from the surface world. Talokan is perhaps the only other civilization that has Vibranium, the key to Wakanda’s world dominance. Major international leaders, smarting with envy at what Wakanda possesses, begin searching the world for their own Vibranium mine, which unwittingly leads a group American Navy SEALs to the outer edges of Talokan. This intrusion sparks a rage from Namor and the Talokan, who accuse Ramonda and Wakanda of bringing the surface world to their door. Namor has his own history with the horrors of colonization, particularly the Spanish slaughtering his Mayan ancestors. Soon after, he and his community retreated underwater with the help of Vibranium. Namor would like to pool Talokan and Wakanda’s enormous resources, but first he must show a display of massive force to prove his own supremacy.

There’s a lot more, including the return of CIA agent – and the movie’s one white guy who can hang – Everett Ross (Martin Freeman). The one officer trusted with direct contact to Ramonda and Wakanda, Everett desperately tries to run defense for Wakanda against an American military that believes them responsible for the attacks of the Talokan. There’s also a young MIT student named Riri (Dominique Thorne), whose wunderkind genius will remind many of the young Shuri in the first film. In her off-time between classes, she designed a Vibranium detector for the US government. Riri is the reason the Navy discovered Talokan in the first place, and now Shuri finds herself protecting her from Namor’s vengeful wrath. Lupita Nyong’o and Danai Gurira both return as a Nakia and Okoye, respectively, though a 160-minute runtime doesn’t allow them as much screen time as you’d might like.

**SPOILER ALERT** Nyong’o’s most significant contribution actually comes in a post-credit sequence that, you guessed it, tips its hat toward a movie of MCU future. It’s less brazen than you’d might expect, and actually gives the audience a tinge of closure and good feeling that will be welcome after two-and-a-half hours of mourning. This film is flatly too long and too crowded, perhaps a sign that Marvel can no longer delineate between writing its cinematic and television franchises. Despite these hang-ups, Coogler still produces something that is much more profound than the usual products of MCU films past and present. The cynicism rampant throughout Marvel movies is wearying when it’s not outright maddening, but Wakanda Forever still feels like a real film when it’s at its best. Seems like a low bar, sure, but after everything it took to get it made, and everything that was lost in the meantime, this still feels like quite an achievement.