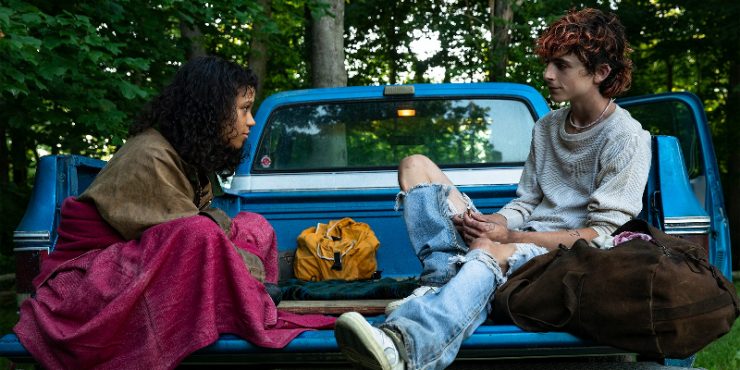 Luca Guadagnino is far from the first director to make the connection between romance and violence, and to equate the rush both can give to a person. Bones and All has a lot of carnage throughout, but it is a romance foremost. Its fluctuation between genres is what makes it so appealing, and Guadagnino handles those transitions with surprising alacrity. It’s your every day love story between two young people living below the poverty line, the biggest twist here being that they’re both cannibals. The movie leans fully into both the shock value of their behavior and the tenderness of their connection. From I Am Love to Call Me By Your Name, Guadagnino’s films have always had a touch of the forbidden in his characters’ relationships, and Bones and All takes that to the extreme.

For me and the twelve other people who watched Trey Edwards Shults’ Waves in 2019, we already knew Taylor Russell was a star in the making. Bones and All gives her a well-earned showcase role, playing Maren Yearly, an eighteen-year-old girl abandoned by her father (Andre Holland) after she tries to bite off one of her classmate’s finger. His departure feels less cruel than it should, you get the sense that he’s finally admitted defeat in a situation he’s been trying to control Maren’s entire life. He leaves her with her birth certificate, which includes the hometown of her mother who left herself when Maren was just a baby. Alone, Maren decides to travel from Virginia to Minnesota to find the mother she has no memory of and rebuild some semblance of normalcy.

It’s this trip where she learns that her cannibalistic urges are not as uncommon as she might think. First she encounters the much older Sully (Mark Rylance), who spots her “condition” just by her smell (in one of the film’s flimsiest narrative conceits, cannibals can identify each other by smell). Sully invites Maren into his home, except she realizes it’s not his home after all, but the home of an older woman on the verge of death. Disturbed by the Sully’s unnerving personality and the frank way in which he speaks of their hungers, Maren chooses to stay against her better judgment, and the two of them feed on her corpse shortly after she dies. Sully decides to take Maren under her wing, but she has other plans and flees in the morning.

Not long after, in Ohio, she meets Lee (Timothée Chalamet), another fellow cannibal living off his wits and the bodies of unsuspecting victims. Standoffish at first, Lee quickly takes to Maren, and agrees to accompany her to Minnesota. He’s also estranged from his family, but he’s the one who left. His youngest sister, Kayla (Anna Cobb), doesn’t understand why he’s always away from home and doesn’t stay for long when he comes back (an unseen mother probably knows more than she lets on). Hitting the road in Reagan-era America, the two live on the edge of both danger and destitution. Taking the money and cars of their victims, their road trip is held together by their savvy, and as they get further along, they fall helplessly in love with each other.

Bones and All is at its best when it’s about Lee and Maren. Chalamet, who shows up a full thirty minutes into the movie, not only gives the film a much-needed boost of charm, but his chemistry with Russell gives the film an emotional crux that it desperately needs. The performances from Chalamet and Russell, captivating and vulnerable, are phenomenal, and illustrate the film’s central point: what is it like to live and love in a world that makes you a monster? Guadagnino’s films are always at least a little bit political, and his frequent allusions to Reagan, and the despair caused by his trickle-down policies, subtly colors their experience. A person has to eat, no matter what depravity has to occur to make that happen.

Mark Rylance’s Sully is the film’s most nefarious element, and I fear the veteran English actor is woefully miscast in the part. His scenes, which are few but substantial, consume the movie, take away from the Lee-Maren relationship that works so well, and distracts with Rylance’s unnecessary, upsetting flourishes. The character of Sully is meant to be creepy to the point of intrusion, but this interpretation – and Guadagnino’s framing of it – gives no room for anything else. It’s the film’s weakest element and one that risks overturning the whole film. Bones and All just barely survives it, thanks mostly to Russell and Chalamet whose greatness far outweigh Rylance’s bloated performance.

The delicate balancing act that Guadagnino is trying to pull off here, between the gore of body horror and the compassion of a romance, is mostly well executed. Bones and All is filled with evocative imagery and is a more handsome film than you’d probably expect, considering the subject matter. A surprisingly mellow, acoustic-based score from Trent Reznor and Atticus Ross hums melancholy melodies below the action, perfectly encapturing the dichotomy between Lee and Maren’s passionate love and ruthless violence. No one will be surprised by how good Chalamet is here, though he is especially impressive. The biggest cheer belongs to Taylor Russell, an actress whose emotional transparency matches perfectly with Guadagnino. We can all agree that she is officially a star.