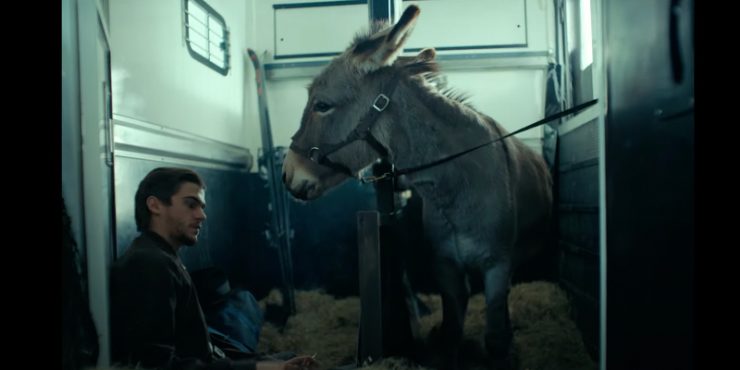 EO follows the existence of a stoic donkey who performs in a Polish circus. EO is the name of the film but it’s also the name of the donkey itself, whose life is in constant flux between the majesty of performance and the various indignities that human beings subject him to. This can’t be said for Kassandra (Sandra Drzymalska), the circus performer who dances with EO, and whose affection outside the tent is the only form of true tenderness that EO receives throughout the movie. When a belligerent bureaucracy removes EO from his home, he begins a journey throughout Poland, going through various owners, including a rambunctious local football team, a ne’er-do-well truck driver (Mateusz Kosciukiewicz), and a severe countess (Isabelle Huppert). Searching for the comfort that he had with Kassandra, the demure EO instead gets introduced to the countless cruelties of the world.

Inspired by Bresson’s beloved Au Hasard Balthazar, director Jerzy Skolimowski intimately connects EO with nature and the many creatures who inhabit it. EO’s encounters with humans are grim, at times violent. He sees other animals – horses, wolves, foxes, among others – whose lives are perpetually fraught in the face of human’s innate lack of empathy for them. EO does meet some who respect him and at times give him life-saving care, but they all fall short of contentment he had with Kassandra. And so, his journey continues forward into the unknown. Using drone cameras, Skolimowski gets incredible footage of beautiful landscapes, capturing both the wonder of the natural world and the callousness of those who possess it. Staying in EO’s perspective, the film possesses a quaint innocence that never falls down to nihilism. There is not much that Skolimowski likes about the people who populate the world, but EO shows us an existence that is something worth fighting for.