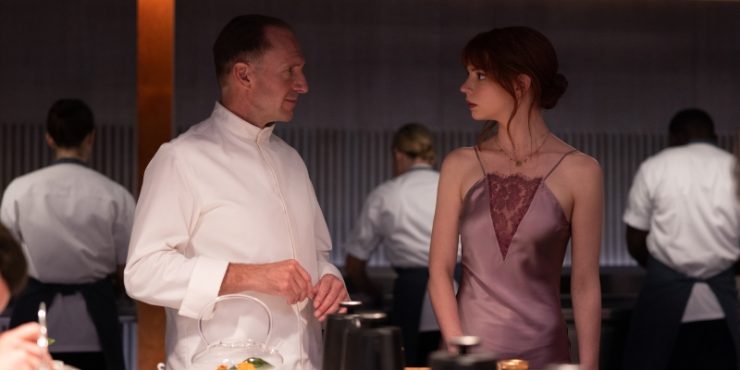 The extravagances of fine dining are ripe for skewering. Chefs who fancy themselves geniuses – crafting plates that more closely resemble modern art than an edible meal – reach a level of pretension that can create comedy without mush effort. Any single episode of Chef’s Table will give you a clear example of the intensity and self-seriousness that this industry exudes. The Menu, a black comedy from director Mark Mylod, examines all this in the extreme. What starts as a satire quickly evolves into an unnerving thriller, as delicate dishes map out a night of painfully curated chaos, the brainstorm of a megalomaniacal chef played by the brilliant Ralph Fiennes. A masterful actor, Fiennes has found great success with comedy in the last decade playing against his Shakespearean reputation, and mixing charm with menace. The Menu is another performance in that tradition.

Fiennes plays Julian Slowik, the executive chef at Hawthorne, an exclusive restaurant on a secluded island which offers patrons a once-in-a-lifetime culinary experience. A seat at Hawthorne is a much-coveted thing; at prohibitive cost ($1,250 a person), it’s really only the top of the elite who can get in. The island has little more than the restaurant, and upon arrival, the severe, cultish atmosphere between Julian and his staff is readily apparent. Hawthorne’s hostess, Elsa (a hilarious Hong Chau), walks guests across the grounds, including the lodging for the entire crew, which shares a privacy-free barracks with two dozen cots and a single toilet (Julian gets his own cabin). The mythology is that their spartan life and unwavering dedication pays dividends towards the production of such exquisite food. As the night unfolds, a more sinister reality emerges.

The limited guests include a pompous food critic (Janet McTeer) and her devoted editor and friend (Paul Adelstein), an A-list movie star (John Leguizamo) who makes D-list movies and his put-upon assistant (Aimee Carrero), three uncouth finance bros (Mark St. Cyr, Rob Yang, Arturo Castro), and a couple (Reed Birney, Judith Light) of unknown but plentiful wealth and a lifetime of unspoken resentments. The biggest outlier is Tyler (Nicholas Hoult) and his date, Margot (Anya Taylor-Joy). Tyler is a Slowik superfan, less a member of the elite and more someone who’s saved money his entire life for this very moment. Margot is less enthusiastic. In fact, she’s not even expected to be there. After a recent break up, Tyler taps Margot to be the unwitting replacement, a sudden substitution that Elsa notes sternly. Unmoved by the trappings of Hawthorne, Margot is mostly interested in a hearty, free meal, which unfortunately proves elusive.

After much stalling, Julian finally makes his appearance among the diners (an act of narrative impediment not unlike Hannibal Lecter’s delayed reveal in Silence of the Lambs), inspiring equal parts awe and befuddlement. His precious menu so meticulously planned, even the seating arrangements of the guests plays a part in the night’s proceedings. He very quickly notes the unwarned presence of Margot, a new element he must improvise to account for. Margot, unwilling to suffer the foolishness of Tyler’s sycophantic obsession with Julian, catches the mercurial chef’s interests. “Who are you?” Julian asks Margot pointedly, “One of us? Or one of them?” The meanings behind these questions get clearer as the full scope of Julian’s menu takes shape. This isn’t just a night of lavish molecular gastronomy, but a story of bitterness and wrath told through the elborate (and violent) creations of Julian and his staff.

Mylod – a director of middling comedies before becoming a go-to director for prestige HBO serieses like Game of Thrones and Succession, among many others – gets a full vote of confidence here from producer Adam McKay. McKay, while a terrible filmmaker in his own right, has a proven track record for recognizing talent in others, and Mylod never misses an opportunity here to execute high style. The script, written by Seth Weiss and Will Tracy, is not quite as clever as it thinks it is, and its observations about class and hypocrisy (both within the restaurant industry as well as the uber-wealthy) are more simplistic than the movie might want you to believe. Mylod cleverly uses this to his advantage, sacrificing attempts at meaningfulness for broad but legitimate laughs that still take incisive shots at the more mainstream aspects of the foodie universe.

That the movie doesn’t hold its cards too long, and goes full sicko mode before you might expect it to, is to Mylod’s credit, who recognizes the brilliance of his cast and their ability to handle such abrasive material and still make something truly funny. Taylor-Joy, the “it girl” for many a contemporary director, has shown more promise than substance since her big break in 2015’s The Witch. She gets a lead role worthy of stardom here. Sardonic and fierce, she is closer to being the film’s protagonist than anyone else, and the arc of the script is whether or not her street smarts and outsider status will allow her to escape the night unscathed. In one of the film’s more didactic touches, Margot has a few secrets of her own, but Taylor-Joy is able to maneuver around these contrivances, still managing to make Margot a stand-out among an overall impressive ensemble.

Across the table from her, Hoult’s Tyler is another in the actor’s collection of hilariously unxious boys, too vain to stand out but too insecure to come out ahead. Hong Chau, the spectral figure hanging over all the diners, makes the most of the single note she’s given to play; her line delivery is a clinic in comic timing. McTeer, Leguizamo and Light also get lovely and hilarious moments amongst the carnage of the night, as the rest of the cast are wonderfully in sync while events take a turn toward the macabre. Amongst it all, Fiennes’ stoic Julian controls it all, with the savage precision of a homicidal Lydia Tár. Julian Slowik is a character that, on the page, feels like a shallow send up of coastal ostentation. One of the weaknesses of The Menu is that Julian seems to be a part of the very elite he wishes to extinguish. Fiennes’ performance cares little about these things. With a glimmer of quaint sadness in his eyes, he earnestly molds Julian into a fascinating, at times pitiful creation, a decision that only makes the performance, and the overall film, funnier.