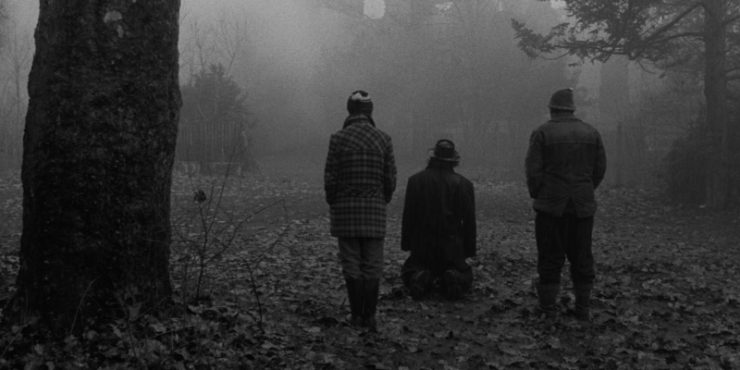 The characters in Sátántangó are used to persevering through brutal conditions. The rain never stops, the sky a permanent overcast grey which promises no hope for warmth or light. Their homes are crumbling and dilapidated, their belongings are few, their outfits are layers of fraying stitches barely holding together. It’s no secret why they choose to spend so much time self-medicating with fruit wine and plum brandy. They’ve run a collective farm in a dreary, isolated part of Hungary. When the farm collapses, certain members of the collective conspire to steal the entire community’s money while others descend into drunken despair. They all fear the return of a man whose manipulative powers know no end. Many conspire to achieve vague political endgames but to what end? What can be achieved? Sátántangó sees the brutality as the point.

At the daunting length of seven hours and nineteen minutes, Sátántangó meditates for long stretches on somber landscapes, grossly impressing the bleak nature of its rural setting on the audience. Director Belá Tarr is world-renowned for his long takes, for knowing the limits of what an audience can tolerate and blowing well past it. Tracking shots are glacially paced and still frames will sit quietly without action for up to ten minutes or more. His interests lie mostly in the moments that would usually be cut out of any mainstream film. Gazes through a window or uneventful strolls along unpaved roads will be the grand sum of his more eventful scenes. The gloom of our own mundanity gets reflected back onto us in a rather unflattering way, portraying the “demanding and hopeless fight for human dignity”, as stated by Irimiás (Mihály Vig), one of the film’s central characters.

Irimiás is a man who strikes fear and awe in the rest of the village. His return contradicts the previously-believed fact that he was dead. Schemes fall apart upon his arrival, his authority an indisputable fact. Schmidt (László Lugossy) and his wife (Éva Almássy Albert) planned to flee with everyone’s earnings until they heard the news. Their betrayal was learned by Futaki (Miklós Székely B.), a crippled man who wishes to cash in on their plot before it’s blown up by Irimiás. What transformed Irimiás from another member of their community to a monolithic leader whose commands must be obeyed? Why was the rumor that he was dead started to begin with? What does he stand to gain from his return? These legitimate questions go without answers, as Tarr allows the reaction of the villagers to dictate what we know about him.

The film is based on the novel by award-winning writer László Krasznahorkai, who co-wrote the script with Tarr. Krasznahorkai’s fiction is lauded for its complexity and known for its difficulty to read. He and Tarr pare down the serpentine prose into stark imagery, turning the complicated nature of Irimiás’s maneuvers into a persistent stream toward downfall. This is perhaps most reflected in the character of Estike (Erika Bók), a young girl in the village who is tricked by her brother into giving away all her money. Her journey toward realization is a fraught one. In the film’s tensest moments, Estike exacts vengeance upon a pet cat that she cannot perform on her brother and the other oppressive elements that surround her. This snapshot – a miniature film within the film – Tarr illustrates how exploitation is inherent to human existence.

The story and the imagery throughout Sátántangó work well together to push forward themes of pessimism, even nihilism. The script touches on the instability of Hungary’s Twentieth Century political predicament, but that is simply background to the film’s overall thesis on humanity’s dependence on authority and the insidious nature of indifference. Bleak as these themes are, Tarr contrasts them with strikingly beautiful compositions. Cinematographer Gábor Medvigy frames everything in exquisite black and white photography, adding a wondrous lyricism to contrast Tarr’s punishing subject matter. Ágnes Hranitzky, both Tarr’s editor and spouse, adds precision to the film’s meandering moods. With so few cuts in this incredibly long film, Hranitzky strikes chords of both impact and delicacy throughout. Mihály Vig, along with playing Irimiás, also provides the film’s haunting, accordion-heavy score which assumes the tone of a haunted carnival.

Peter Berling plays a robust doctor who, even in a village filled with booze-swillers, develops the reputation of a hard drinker. His constant drunkenness has made him a homebody who can hardly get from room to room, let alone go outside. His own drama, much like Estike, plays outside of the web of Irimiás and the other villagers. He is both ignorant to their plight and too knowing to become entangled in it. The experiences that drew him into such a reclusive life are once again unstated, but it’s not difficult to construct a scenario from everything that surrounds him. Despite this, he does keep tabs on the village, keeping notebooks on each inhabitant and noting their movements and behaviors. Unlike most of the other characters, he doesn’t seem motivated by malice, but observance. Even in his haphazard state, he is still collecting knowledge.

All of the characters in Sátántangó, even the resourceful Irimiás, seem fated for a grim end. It speaks to Tarr’s own visions of their lives that he denies the audience the fruition of this. Perhaps the relief of death is too fine a point to put on the end of a story meant to reflect the relentlessness of everyday life. Much like the cattle pacing aimlessly through the film’s opening shot, these characters roam the Earth looking for a someone to follow. The constant carrot-and-stick keeps them moving, keeps them willing to forsake their own earnings, their own autonomy. This exploration of pointlessness, through the dark realities of our existences, can read as terribly depressing. And yet, Tarr finds moments of grace in these images. Their hopelessness, the result of society’s systematic dehumanization, unfolds with tenderness and care. Their fate is met with true majesty.