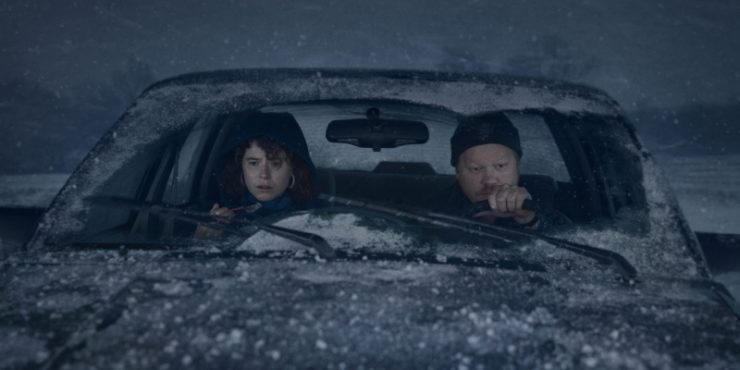 Without the filter of directors like Spike Jonze and Michel Gondry, the screenplays of Charlie Kaufman can have an unfiltered quality, as the despair so central to his stories becomes much less palatable. Directing his own scripts, Kaufman’s films are bleak, the humor is marred with discomfort and existential philosophizing, the idiosyncrasies go from quirky to unsettling. The fact that his movies can be difficult to sit through seems by design. They can find themselves caught between the delicacy of dreams and the fraudulence of a Las Vegas magician. But they’re captivating, stirring and still unlike anything else at the movies right now. (Remember going to the movies?) His latest film, I’m Thinking of Ending Things, is based on a bestselling novel by Iain Read, which was marketed as pulpy psychological horror. Kaufman transforms it into one of his patented reality benders, another exploration into the plight of the human condition.

As the title suggests, the film’s main character (Jessie Buckley) – whose name alternates between Lucy, Lucia and Yvonne – is thinking of calling it quits with her boyfriend, Jake (Jesse Plemons). She can’t seem to quite pinpoint why she wants out of her relationship, though her ambivalence is contrasted greatly by what we’re presented with: an extremely uninteresting relationship. She and Jake are driving through a snowstorm to the farm house of his parents (played with wonderful unhinged energy by Toni Collette and David Thewlis). The long drive there is filled with casual conversation tinged with tensions coming from her readiness to end it all. She is turned off by his frequent insistence that their conversations be more than informal car ride chitchat, as well as his attempts to show off his intellect.

It is during their dinner at Jake’s parents’ home that reality begins to fracture. The parents present an almost hostile attempt at hospitality upon their arrival, and the meal itself is consumed mostly with an uncomfortable retelling of the young couple’s meet-cute at a bar trivia night. As the she tells the story, Lucia/Yvonne’s investment in her continued relationship with Jake becomes even more confounding to her, as her surroundings begin to turn against her. Her protestations that they must return home that night – she has important work to do – are met with frequent excuses about why they must stay. All the while, the snow storm outside becomes more and more treacherous. When they finally do leave the house and begin their return to the city, things become even more unbalanced.

Like his directorial debut, Synecdoche, New York, I’m Thinking of Ending Things is fascinating in its stubborn refusal to allow its audience a basic sense of comfort. The persistence of its unnerving tone is perhaps its most conspicuous trait. Unlike David Lynch – perhaps are most beloved contemporary surrealist – Kaufman does not lean on the macabre to sharpen his imagery. In fact, the cruelty of time and mortality is macabre enough for him. Lynch stresses significance in the bizarre, where Kaufman stresses it in the mundane parts of our lives and conversations. The fact that we continue on is both a source of inspiration and indignation. The obsession with aging shows itself in his deconstructions of time, like an inverted Richard Linklater project. The span of time is condensed into a single night, and its basic passage is truncated and replaced by an uncanny esotericism.

This is Kaufman’s first adaptation since 2002’s Adaptation, in which he made a fictionalized version of himself the main character of the story, thus setting the stage for his becoming our country’s most well-known screenwriter. It was a genius stroke both for that film and for Kaufman’s career, even if there was very little left of Susan Orlean’s journalistic curio, The Orchid Thief, the book which it was supposed to be based on. I haven’t read Orlean’s book, nor have I read Iain Read’s novel, but it seems that Kaufman did not stray quite as far from the source material this time around. It helps that idiosyncratic fiction plays greatly into Kaufman’s strengths. Our final product is a script that documents the unending trudge of existence while highlighting the particularly insidious societal pressure on women to maintain romance with less than desirable mates. Though not a feminist by reputation, Kaufman does indeed understand the fear of being in an undesirable situation.

Buckley, the Irish actress who made noise last year both in the film Wild Rose and the HBO miniseries Chernobyl, is given a pretty unenviable part to play, one that must toggle between multiple existences and personalities. While Plemons, Collette and Thewlis are given plenty of strange quirks, they are mostly left to play the same notes of their varyingly unstable characters. It is Buckley who’s made to man the film’s frequent gear changes, a transient performance meant to fulfill the needs of that exact, ever-changing moment. (It makes sense to learn that Brie Larson left the role after initially being cast.) Her performance, filled with equal parts defiance, terror and acquiescence, is heartbreaking and triumphant in equal measure. She brings a much-needed soul to Kaufman’s abstractions.

There’s a grandeur to the despair that Kaufman writes about. Often, he will compare our desperation to a performance, whether it be the never-ending play performance at the heart of Synecdoche or the puppets that make up the cast of Anomalisa. There is a sequence at the end of I’m Thinking of Ending Things that is breathtaking in its melancholy and interpretive power. It’s enough to make you forgive Kaufman for his curmudgeonly ways. There’s so much to admire in Kaufman’s lack of discipline and his commitment to the odd dreamscapes inside his own mind. Through the frustration of trying to simply understand, Kaufman does present us with a tenderness if we’re willing to look for it. His fantastical constructions do much toward ameliorating the unforgiving worlds that he creates.

Written for the Screen and Directed by Charlie Kaufman