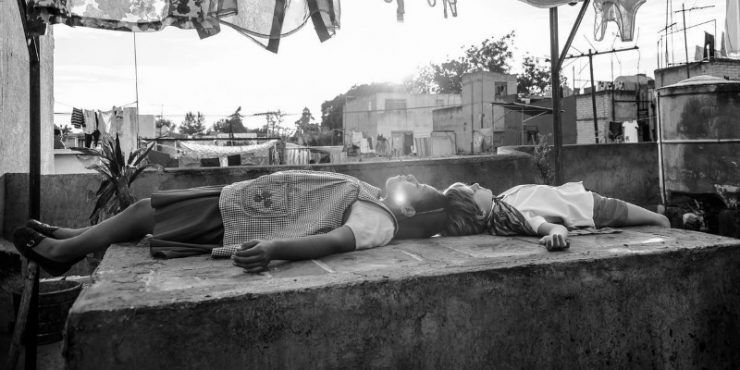 Alfonso Cuarón is one of maybe half a dozen filmmakers considered by many to be amongst the best living directors on the planet. He is the foremost figure in the trifecta of major Mexican directors, ahead of Alejandro González Iñárritu and Guillermo del Toro (though Iñárritu already has one more Oscar). His ability to toggle between the grand scope of traditional Hollywood storytelling and intimate, masterful shot creation is elite. His reputation unblemished, it’s incredibly brave that he would invest it all in a Spanish-language film (his first since Y tú mama tambien in 2001). For a director who could do anything – and nearly did in his previous film, Gravity – to return to his home country and make Roma, a collection of childhood memories, is incredibly touching to me.

Roma is a film shot impeccably in a crisp, wide format in sharp black & white. Each shot, often including long, lingering takes, evolves into a narrative all on its own. Acting as his own director of photography, Cuarón fills Roma with vibrant canvases, the action mobilized in both the foreground and background simultaneously. Taking place near Mexico City (the title coming from the Roma district where the main family resides), Cuarón spares no effort in astonishing audiences in making his home a gorgeous intersection of metropolitan engagement and natural beauty. Few directors would have the ego to construct something this perpetually regal, to put his stamp of every corner of every frame. That he can do so in Roma without displaying self-interest is a tribute to his screenplay.

The film’s story is funneled through the character of Cleo (first-timer Yalitza Aparicio), a full-time servant for an upper-class Mexican family in the early 1970’s. Her boss, Sofía (Marina de Tavira) is married to Antonio (Fernando Grediaga), but their marriage crumbles quickly under Sofía’s feet, and she is left with her four children. Cleo is a big help, seeing as the children all have a great affection for her, but Sofía’s sorrow quickly consumes her. In her private life, Cleo’s relationship with an aspiring martial artist, Fermín (Jorge Antonio Guerrero), becomes complicated when she thinks she might be pregnant. In turmoil, she gets some support from Sofía, but the woman proves too preoccupied with her own crisis. Forced to marginalize her own needs against the needs of the distressed family, Cleo’s steely facade starts to fade.

Like Y tu, Roma deliberately places the narrative into the unstable political climate of its setting. Cuarón’s motif of everyday life continuing through the chaos of the outside world (never done better than his 2006 masterpiece, Children of Men), continues in Roma, where Cleo’s troublesome pregnancy and Sofía’s marital drama still takes center stage in front of chaotic student protests and burning wildfires. More conspicuous is the film’s handling of race and class, which is fundamental to understanding the meaning of the film. Cleo, much darker than the white family she serves, sees nothing wrong with her social standing. There are no moments in Roma where she questions the ethics of being a needless servant to people who want for very little. It’s Cuarón, through the cleverness of his script and camera, who shows us the complications of Mexico’s racial hierarchy.

Roma finds lots of virtue in his protagonist, her unwavering sense of duty and resourcefulness a showcase of ultimate integrity. Cleo is based on a real-life nanny from Cuarón’s own childhood, and I wouldn’t blame anybody for seeing some Gone With the Wind-level mammy-praising in Roma. For me, there’s a purity of affection here that makes Cleo’s ceaseless workload easier to swallow. Roma mourns her plight – which becomes quite dire as the film progresses – and has a legitimate understanding of her situation, unlike other magic nannies in the history of the movies. At its simplest, Roma is a film that contrasts the unbreakable will of the poor versus the emotional fragility of the wealthy, and while it’s free of moral grandstanding, it still points directly to Cleo as its spiritual center.

The only controversy within Roma, such as it is, deals with its distributor, Netflix. For a company so strident in pushing it’s at-home streaming service, many bemoaned the fact that Roma – a film whose astonishing majesty screams more than most to be seen on a large movie theater screen – wouldn’t get a fair shot in theaters outside of the major metropolitan areas. I’m conflicted, unsure of how a black & white, Spanish-language drama would ever perform at the box office, no matter the word of mouth. Consider this: at the theater where my screening was held, the first half of the film was beleaguered by construction noise outside and the theater itself seemed to be having malfunctioning sound. Aside from the obviously frustrating experience, it’s a testament to Roma that its effect still hit me hard. My point: if you can see this film anywhere – home, theater, cell phone – you will be treating yourself to something very special.

Written and Directed by Alfonso Cuarón