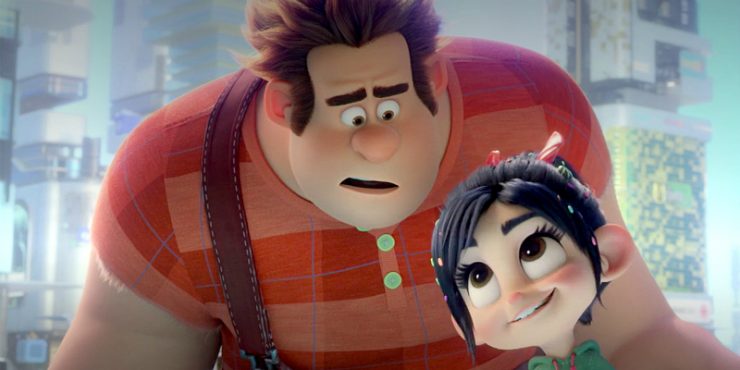 Surpassed by its sister company, Pixar Animation, in terms of prestige and trophies, the standard-bearing Walt Disney Animation studio has climbed back into equal footing over the last few years. Starting with 2010’s Tangled and culminating in the 2013 mega-hit Frozen, Disney appeared to embrace the world of digital animation that Pixar had been mastering for the previous two decades. Between those two films was Wreck-It-Ralph, a sweet-hearted video game comedy which came out to modest praise and hefty box office in 2012. The film’s sequel, Ralph Breaks the Internet, does what the title suggests, and brings the first film’s characters out of the boxy arcade universe and into the endless slipstream of the world wide web.

Ralph (voiced by John C. Reilly) is a far cry from the embittered video game villain from the first film. Having become best friends with Vanellope von Schweetz (Sarah Silverman), a feisty princess from the candy-themed racing game called Sugar Rush, Ralph has embraced his antagonistic role in his game Fix-It Felix. Things turn, though, when Vanellope’s game is threatened with being turned off, and the oddly matched duo must use the arcade’s newly installed wifi connection to go into the internet and fix the problem. They encounter various websites like eBay, Amazon and a famous video sharing site called BuzzTube. Hoping to make money by becoming viral, Ralph begins posting popular videos on BuzzTube, but not everything that comes back is positive.

Like its predecessor, Ralph Breaks the Internet is occasionally quite clever in its personifications of invisible technological functions. Things as mindless as clicking a pop-up or ‘liking’ a video are presented in standard, physical ways that often get big laughs. At the same time, with a canvas as big as the internet, Ralph has to dedicate too much time to this schtick. Not to mention its display of major brand logos and corporations that falls short of product placement but not far. A brief glimpse inside the online presence of Disney gives the film a meta-joke that shows the daunting scope of the company’s stranglehold on popular entertainment. This level of satire becomes a bit somber when you realize that the only people that can survive making jokes at Disney’s expense is Disney itself.

Still, Ralph has its charms. Ralph and Vanellope’s chemistry and contrast still creates legitimate laughs and the appearance of new characters gives the sequel some interesting new twists. There’s Shank (Gal Gadot), a badass driver from the online game Slaughter Race who quickly becomes everything Vanellope chas wanted to be, and J.P. Spamley (Bill Hader), a veteran pop-up ad man who takes Ralph and Vanellope all over the internet’s seedier underbelly. There’s also Yesss (excellent voice work from Taraji P. Henson), the head algorithm for BuzzTube who takes it upon herself to support Ralph’s cause – as long as it’s getting massive views for the site.

At moments, Ralph Breaks the Internet makes its comments about the unsavory nature of online culture (a scene where Ralph reads the comments to his BuzzTube videos can hit close to home for many), but it’s mostly superficial. More than anything, directors Rich Moore and Phil Johnston are using it as a set piece, a way to further world-build and expand the Wreck-It-Ralph universe. There is some diminishing returns, though, and mostly Ralph Breaks the Internet feels perfunctory rather than necessary. Much like the internet, Ralph is flashy and entertaining, but it’s a search to find something of real substance.