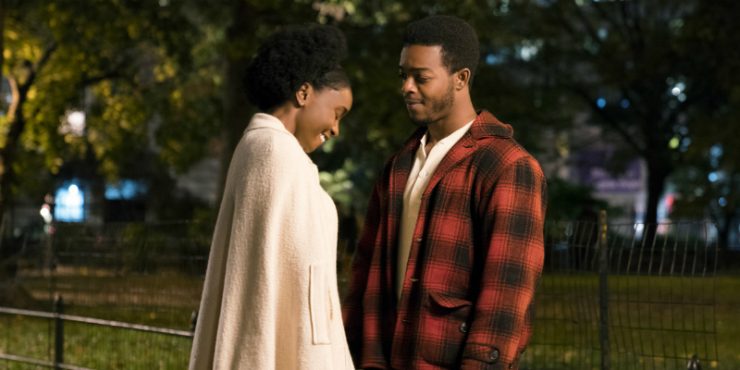 The merging of Barry Jenkins and James Baldwin is as serendipitous as it is joyous, a wondrous meeting of historical talents. The Oscar-winning Jenkins could have made anything he wished after his second film, Moonlight took home a Best Picture statue, and his decision to adapt Baldwin (one of our most revered authors who is seldom brought to the movie screen), speaks for his credence for the beloved novelist and social thinker, and also to his confidence as a director, to take on such a task. If Beale Street Could Talk is far from Baldwin’s most famous novel, but its sparse narrative allows the famously evocative Jenkins to conjure gorgeous imagery to fill in the gaps. Jenkins still has the benefit of Baldwin’s powerful prose, which he keeps almost entirely intact, translating the sensual intensity of the novel into the best romance of 2018.

The lovers of Beale Street are Tish (KiKi Layne, in her first film) and Fonny (Stephan James), two childhood friends who evolve into lifelong soulmates. Before getting married, Tish ends up pregnant with Fonny’s baby, but she doesn’t discover this until after Fonny is imprisoned for a crime he didn’t commit. Baldwin’s tales often detailed black Americans caught within the dire circumstances of their tumultuous country, but where Beale Street differs – especially in Jenkins’ adaptation – is his focus on the affection. To Baldwin and Jenkins, the miracle of Tish’s and Fonny’s love surviving the torment of American racism is a symbol for the miracle of African American success as a whole. The power to overcome prejudice is a highlight of their love story, not a demarcation, and the loving way Jenkins portrays black emotional strength is one the film’s key blessings.

Not that everything is hunky dory. Tish’s sister, Ernestine (Teyonah Parris), helps get a lawyer for Fonny, and Tish’s parents Sharon (Regina King) and Joseph (Colman Domingo) are as loving and supportive as they can be when they learn their daughter is with child. But the case against Fonny looks grim, even with shaky evidence provided by a notoriously bigoted cop. Fonny’s family is tougher to measure. With a self-righteous mother (Aunjanue Ellis), an alcoholic father (Michael Beach), and two catty sisters (Ebony Obsidian and Dominique Thorne), Tish learns quickly that she won’t be able to count on much outside of her own family. Even Fonny’s friend Daniel (a tremendous Brian Tyree Henry), who along with Tish provides Fonny’s alibi, has been arrested and is at the will of a DA’s office ready to call Fonny guilty.

If Beale Street Could Talk has moments of incredible pain, with characters who know that their very freedom is always in jeopardy because the color of their skin. This existential dread hangs over every frame, and even as Jenkins fills the screen with exquisite imagery, he’s cognizant of the emotional scale. Like all great filmmakers, Jenkins has a remarkable instinct for when to linger and when to cut, when to have patience and when to rattle. In Moonlight, he occasionally asked his actors to look directly into the camera, a move he utilizes much more often here, nearly in every scene. The motif unlocks yet another emotional element within the story, creating a humanity with each character, sometimes in desperation and other times in somber reflection – and sometimes in moments of great passion.

Employing the same crew from his previous two films (James Laxton as cinematographer, Nat Sanders and Joi McMillon as editors, Nicholas Britell as the score composer), Jenkins crafts an astonishing piece of filmmaking. Often constructing scenes with limited dialogue, he allows the actors’ performances to inform the camera and the editing. This is certainly his most lush film, helped greatly by the costume work of Caroline Eselin, who puts on a clinic of pastel-colored outfits spread throughout the characters. After the muted palette of Medicine for Melancholy, and the deliberately blue-tinted aesthetic of Moonlight, Beale Street finally allows Jenkins to access his more opulent desires, producing beautiful, occasionally haunting sequences awash in cascading light.

The ensemble cast, led by Layne and James, performs splendidly within the story’s lived-in milieu. Baldwin’s narrative, stirring without being melodramatic, requires a perfect pitch, which Jenkins brings out of his actors. In supporting roles, both Regina King and Brian Tyree Henry are particular highlights. King’s Sharon is a mother spread thin asked to do a rather daunting task, while Henry’s Daniel is an ex-con whose childish demeanor masks a broken spirit. These two figures (one strong, one weak), orbit Beale Street as an example of possible roads, their fates decided mostly by pure chance. James’ Fonny is an infectiously charming young man trying desperately not to be overcome by helplessness, but it is KiKi Layne’s Tish who guides the film as Beale Street‘s spiritual center. Layne’s portrayal of innocence and naiveté giving way to painful realization is the movie’s most gravitating arc.

Jenkins has said in interviews how conscious he is of the blackness in his films, and the intentionality placed in an industry still afraid to market things outside of white (and male) audiences. I am obviously no judge of how black or not black any movie is, but it speaks volumes of Jenkins’ skill – and perhaps the evolution of the movies – that he can tell his tales without a white perspective. Moonlight was infamously free of any white characters, while the degree that Beale Street has any interest in black-white conflict, it is in how it has shaped every African American family. Jenkins has never felt indebted toward a happy communion between the two sides, instead he is invested in giving his black characters complete autonomy over their own stories. And so, it is in that regard that Beale Street pays great homage to James Baldwin, a dignified figure capable of great anger, who only asked that his people be considered human beings. There are few things in this world right now more human than If Beale Street Could Talk.

Written for the Screen and Directed by Barry Jenkins