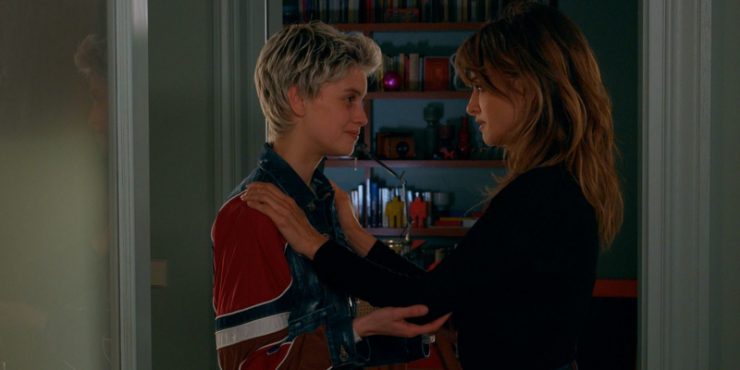 With a reputation for provocation and sensuality, Spanish maestro Pedro Almodóvar has gotten somewhat softer in his later years. His last three films – Julieta, Pain & Glory, and now, Parallel Mothers – are somber and meditative, a more tender version of his earlier work. The sexuality is not sacrificed but it is contextualized through the experience of age. Relationships have more meaning than physicality and controversy. Parallel Mothers stars Penelope Cruz as a photographer named Janis, stirred by the history of her home country, Spain. She’s searching for the ditch that is the burial space of her great-grandfather, a victim of Franco fascism. Timelines and hereditary inheritance are important to her. Only through discovering the truth of Spain’s history can the nation truly heal.

This plot line is more in the background. Parallel Mothers is mostly about Janis’ relationship with Ana (Milena Smit). The two share a room in the maternity ward and bond over their fear, their pain, and the fact that the father is not in the picture for either of them. Ana is still a minor while Janis is nearly forty, but they still grant each other comfort up until the moment that their daughters are born. They exchange information, but lose touch, Janis raising young Cecilia with her maid and an au pair, and Ana taking baby Anita and staying with her mother. Cecilia’s father, a forensic anthropologist named Arturo (Israel Elejalde), can’t find a way out of his marriage, and upon seeing the baby, is gripped by the belief that it’s not his. As Cecilia grows, even Janis begins to have her doubts. Her search for the truth, and a reunion with Ana, brings on stunning revelations.

There is a moment when you think you’ll know where Parallel Mothers is headed, and while Almodóvar is not one for complicated plot, he is much more clever than something predictable. Janis’ search for her great-grandfather’s remains parallels her current search for Cecelia’s parentage, with Almodóvar stressing the history of family dynamics crushed by cruelty and malfeasance. The reality that Cecelia and Anita were switched at birth begins to become more and more obvious, but after trepidation and tragedy, Janis finds herself unable to admit the reality. When Ana finds herself living in Janis’ house, their relationship begins to take a strange shape, as the role of mother and daughter becomes indistinguishable from their own friendship (and for a brief time, something more than a friendship).

The sequence of events are surprising, bordering on fraught, but Almodóvar is not here to shock like he may have in All About My Mother or Bad Education. Janis’ decisions vary from practical to selfish to destructive, and her responses to Ana’s vulnerability are not always admirable. Ana’s own relationship to her family is less concrete, and her youth leaves her ignorant to the damning history of Twentieth Century Spain that spurs Janis’ obsession. Ana’s mother, Teresa (Aitana Sánchez-Gijón), is an actress who catches her big break just as Anita is born. Her father is an unseen presence, contented to abandon her when she becomes pregnant. Ana’s naiveté makes her blind to the motives of others, but her toughness makes her resilient when those motives arise.

Almodóvar weaves these tales together tightly, creating a seamless thematic blend between all the characters. Their good intentions don’t always lead to the best results, but their actions are framed as high drama with Almodóvar’s eye-popping color palette setting the scene for their emotional pyrotechnics. Alberto Inglesias’ lush score adds a vibrant touch to the melodrama, even if Parallel Mothers is working in a more minor key. Even as his explicitness is toned down, Almodóvar does not avoid the scandalous, guiding the Janis-Ana relationship into a passionate detour. The film’s conclusion, on first sight, might seem too tidy, with betrayals and grievances being forgiven with convenience, but it speaks perfectly to Mothers‘ macro point of rebuilding the strands of lost families.

Cruz, a veteran performer within Almodóvar’s stable, is brilliant as Janis, a woman whose grief visits her in unorthodox ways. She is desperate to find the truth, but when confronted with her own frank reality, becomes muted by shock. Much like Antonio Banderes in Pain & Glory, Almodóvar guides Cruz to great heights here, in a performance that ranks amongst the best of her career. Smit, Elejalde, Sánchez-Gijón, and the always welcome Almodóvar favorite, Rossy de Palma, round out a solid ensemble that captures the complexities throughout the emotionally bracing script. I think late era Almodóvar might be my new favorite model. Parallel Mothers is a late entry as one of the best films of the year, but it is also one of the best of the distinguished director’s career.

Written and Directed by Pedro Almodóvar