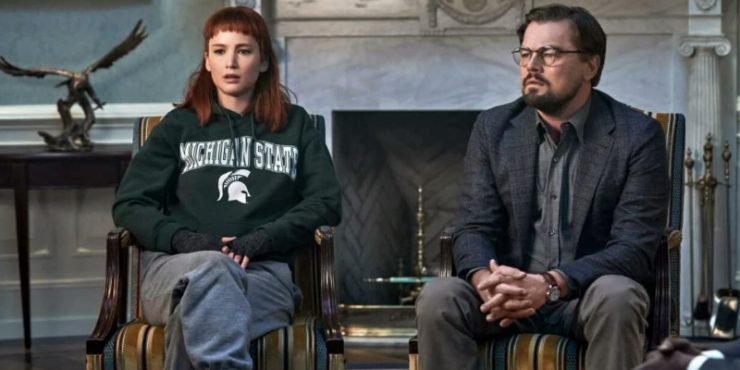 Within all of the supporting characters in Don’t Look Up (of which there are so, so many), there’s a small window into a version of this movie that could possibly work. Writer-director Adam McKay stridently by-passes all of that to instead layout a long-used metaphor of a planet-destroying comet. The world is about to end… and nobody cares! It’s a nose-point stand-in for our oncoming climate change disaster future, in which the human race still finds ways to get distracted by big tech devices and culture wars, and lose track of the problem at hand. The protagonists of this film are screaming at the top of their lungs for people to listen, much in the way McKay himself would like people to endure the existential terror of our dying planet. Are we willing to listen? It’s the kind of condescension that I’ve come to expect from this filmmaker, who appeals to all his audiences with the subtlety of an atom bomb.

I’ve listened to enough interviews with McKay to know that his effort is sincere, and his concern is a righteous one, which makes it all the more infuriating that he can’t find ways to sidestep his obvious disdain for the public at large. His script is weirdly apolitical and his targets are oddly non-specific, which nullifies any satirical bite the film hoped to have and squanders any chance for the movie to have anything substantial to say. McKay made his bones as Will Ferrell’s partner and directed some of his biggest films (Talladega Nights, Anchorman), but his post-Ferrell shift into a semi-serious liberal lecture hall has been borderline unwatchable for me. It was able to get him an Oscar for writing The Big Short, but Don’t Look Up exposes just how out of touch he really is.

And nothing can make you seem more out of touch than trying to teach everyday people a lesson and then casting only megawatt superstars in every role. Leonardo DiCaprio is Dr. Randall Mindy, an astronomer and professor at Michigan State. He becomes apoplectic when one of his PhD students, Kate Dibiasky (Jennifer Lawrence), discovers a comet headed toward Earth. It is over six kilometers wide and is described by the astronomy community as a “planet killer”. They breathlessly explain the doomsday scenario (there is a little over six months until the comet makes contact) to NASA bigwigs, and Dr. Teddy Oglethorpe (Rob Morgan) agrees to get them an audience with President Orlean (Meryl Streep, doing a whole lot and accomplishing very little).

Orlean – and her son/Chief of Staff, Jason (a petulant Jonah Hill) – prove uninterested in the crisis, and more concerned with appointing an unqualified Supreme Court nominee and gaining traction in midterm elections. The press are a dead end as well, as newspapers cast doubt on their peer-reviewed findings and an appearance on a massive daytime talk show (hosted by Tyler Perry and a completely yassified Cate Blanchett) does little more than promote Kate’s viral hysteria and Randall’s public makeover as a dreamy scientist. Above it all is the billionaire and protean eccentric Peter Isherwell (Mark Rylance), whose tech company BASH has allowed him to buy massive influence in the Orlean administration. As options are exhausted, Mindy, Dibiasky, and Oglethorpe try their best not to become fatalistic in the face of society’s inability to mobilize a proper response.

One of the many disappointing parts of Don’t Look Up is that the performances throughout are actually not bad, but are all uncomfortable fits in totally different ways. Streep and Hill’s toxic, oedipal political powerhouse suggests a more absurd comedy, a farce that could have been legitimately devastating. Timothée Chalamet plays a skater punk evangelical who shows up in the film’s final act, and his report with Lawrence suggests a charming end of the world romantic comedy which is arbitrary but at least entertaining. And in watching Don’t Look Up – where Lawrence is quite good in a climate change metaphor in which no one listens to her desperate pleas for sanity – I can’t be the only person who thought about mother!, which was a much more brave, unhinged response to our depressing reality.

McKay’s lack of empathy for those he deems not as enlightened as himself has troubled me since The Big Short. With each subsequent film since, as his worry has increased so has his antipathy. Several times in Don’t Look Up, Randall and Kate find themselves screaming into voids, their proclamations discredited, if not outright ignored. Through all the screaming, it’s still hard to figure out what exactly McKay was trying to say. The comet symbolism, a hackneyed movie tradition, feels hollow in the face of what it’s meant to represent, and the film’s attempts to skewer current events flagrantly miss the target (a scandal involving a possible porn star Supreme Court nominee feels pathetically quaint in the face of someone like Brett Kavanaugh). The stars are committed, but much in the way they were in that video of celebrities singing “Imagine” at the beginning of the pandemic. This is just the feature-length version of that.

Written and Directed by Adam McKay