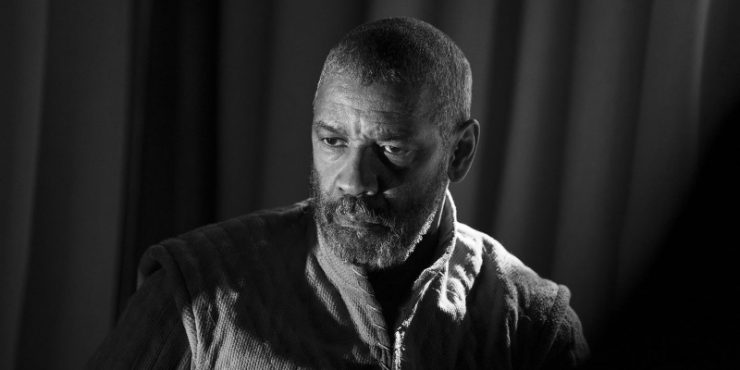 William Shakespeare’s Macbeth haunts the theater both inside of outside of its productions. A longtime held superstition states that even saying the word “Macbeth” inside a theater can bring on disaster. The play, noted for its use of witches and tragic prophecies fulfilled, is among the best known of The Bard’s work. In his first film without his brother, Ethan, Joel Coen tries his hand at adapting the Scottish play. The Coen Brothers’ name is synonymous with wondrous films filled with idiosyncrasy, classic film literacy, and absurd humor. Their work ethic has fused them together thoroughly, so what does a film look like when only one of them is behind the helm? I’m not sure if The Tragedy of Macbeth answers that question, as much as it further ensures Coen as one of the sharpest filmmakers alive.

Shot by Bruno Delbonnel, The Tragedy of Macbeth is easily the most beautifully photographed film of 2021. In an inky black and white, and constricted into the boxy 1.19:1 aspect ratio, Coen condenses Macbeth into singular portraits, gorgeous frames of shadow and light. The images stress a bleakness within the story, one condemned with foreboding from its opening shot. Ravens circle the sky before three witches (all played with strange, contortionist perfection by Kathryn Hunter) greet the two Scottish generals Banquo (Bertie Carvel) and Macbeth (a mighty Denzel Washington). The witches tell Macbeth that he will be king, a prediction that is first met skeptically, before ambition grips him whole. After some pushing from his wife, Lady Macbeth (Frances McDormand), Macbeth decides to force the issue and claim his throne.

The rest is known. Macbeth’s thirst for power soon gives way to madness in both he and his wife, while the true heirs to the throne (Harry Melling plays Malcolm, the official successor to Brendan Gleeson’s King Duncan) match Macbeth’s bloodlust twofold. Corey Hawkins plays the moral Macduff, whose misfortune of being a noble rival to the throne leads him toward the punishment of the cruel Macbeth. Alex Hassell plays the thane Ross, who himself proves a schemer of power, though his ambitions notably less robust and his actions much more subtle. As Macbeth unfolds, the irony of how the witches’ prophecy comes true is the heart of what makes Shakespeare’s plays so esteemed.

The film’s spartan sets (designed brilliantly by Stefan Dechant) parallel the affectation of a theater stage as well as recall the morose angularity of German Expressionism. The locales are a perfect visual foil to the lush beauty of the camerawork, which transfixes and places the audience perfectly within the play’s haunted setting. Coen is a filmmaker noted for a humor so black that there is no subject matter free from his cynical, grinning farce. There is no humor to be found here. Perhaps it’s Coen’s respect for the material or the very nature of the material itself (or maybe this is the area where Ethan Coen’s absence is most felt), but The Tragedy of Macbeth sticks steadfastly to its namesake, drowning the horrors of this tale (senseless murder, betrayal upon betrayal) in the bleakness it deserves.

Denzel is nearly as legendary as Shakespeare himself, at least as far as we Americans are concerned. His take on the role (weary, burdened, as unsuited to the crown as the film needs him to be) is proof that, despite how long we’ve known him, he still has much more to show us as a performer. Washington’s domination of the film is contradicted by the feebleness of Macbeth himself. The mad general, cursed first by witches and then the vicious tongue of his wife, is brutal with the sword and unsparing in his ruthlessness, but he is still the victim of his wanton soul. He mistakes the witches’ prophecy for a Faustian bargain, and the very tools he uses to make it come true are the same that ensure that he will fall by the story’s end. Washington delivers Macbeth’s fitful speeches with gusto, but like all of his best performances, it is what he accomplishes when he’s not speaking that really make the performance something to behold.

I’ll admit to missing some of the spirit that comes with having both Joel and Ethan Coen making a film together. One can’t prove that a Macbeth involving both brothers would have had much more than the blunt, unsmiling result that we got here. The Tragedy of Macbeth is gorgeous to look at, and thanks to Denzel Washington, a compelling story as well, but the seriousness of all involved left me cold at times, even while I admired the feat of filmmaking and acting. It’s sparse approach to Shakespeare recalls Welles’ Chimes at Midnight and Othello, but even those films had moments of mirth. This felt more like a showcase of incredible skill than a fully realized film – a phenomenal stage production that happened to be shot for the movies. It’s beauty leaves a coldness in its wake, and perhaps that itself is the cruel humor of Joel Coen showing in a renewed form.

Written for the Screen and Directed by Joel Coen