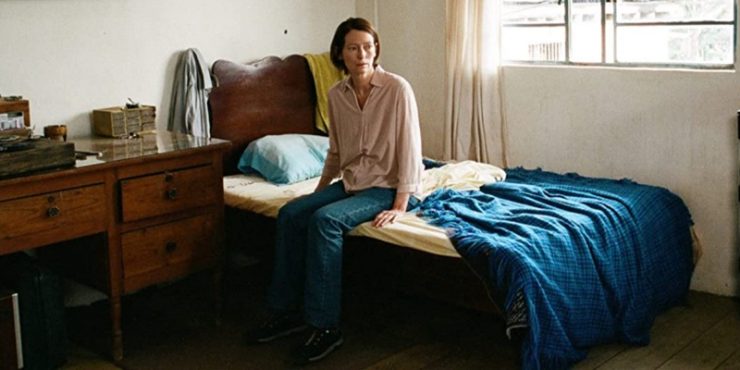 A strange sound in the middle of the night. A woman is awaken. What was it? These are the foundational elements to Memoria, the latest film from the great Thai filmmaker Apichatpong Weerasethakul, the patriarch of Slow Cinema. Our woman is named Jessica and is played by Tilda Swinton. She’s a Scottish business woman living in Colombia. There are a lot of strange things going on. She meets a French archaeologist (Jeanne Balibar) exploring underground tunnels looking for the hidden deceased of the past. Her sister (Agnes Brekke) is in the hospital with a mysterious illness, said to be caused by a primitive people living within the rainforest. Meanwhile, Jessica’s own mental health is beginning to fray. Memories vanish from her mind or they return altered, inexplicable to those around her. And still, there is the sound, exploding into her head at intermittent times.

She visits a sound engineer named Hernán (Juan Pable Urrego) to describe it. It sounds like a giant ball of concrete falling down a metal tube surrounded by water, she says. Because Weerasethakul does us the benefit of letting us hear the sound ourselves, it’s pretty stunning to see how accurate her description is. There’s a threat to the sound, both in its explosiveness (is it a weapon?) and its uniqueness (is it of this world?). The sound keeps her up at night. She visits a doctor who explains that hallucinations are common in this part of Colombia, then gives Jessica a pamphlet for Jesus Christ. Jessica takes her own journey into the jungle, and meets an older man, also named Hernán (Elkin Díaz), who scales fish and never leaves his home. “Experiences are painful,” he states, and goes on to extrapolate on this hypothesis in fascinating and haunting ways you could never predict.

Weerasethakul’s meditative pace is well-known and shots throughout Memoria will hold for minutes at a time. The effect can be equal parts tedious and dazzling, mind-boggling in its inaction but transfixing in its composition. His films, intellectually and emotionally robust, ask audiences to do the legwork and come upon their wavelength. It feels almost revolutionary compared to today’s commercial cinema, which treats instant and perpetual satisfaction as the only currency. I was not as struck by Memoria as some of Weerasethakul’s earlier films. There’s a steeliness here that I didn’t find in Tropical Malady or Uncle Boonmee Who Can Recall His Past Lives. Those films found a majesty within their magical realism, where Memoria stresses its stillness, almost in defiance.

Neon’s interesting, one-week-at-a-time release strategy has turned Memoria from a curio to an event. Adding scarcity to an internationally beloved director’s latest release has always been smart business, and Neon seems to be doubling down. Not that Weerasethakul’s films have ever been expected to make money. His movies, spiritual and communal in incredibly intimate ways, aren’t even expected to make sense, at least not in the way that we usually expect from a feature film. The imagery throughout is beautiful and Swinton’s performance is committed (su español es muy buena!) and captivating. I wish I could have loved this film more, as its audacity is clear for all to see.

Written and Directed by Apichatpong Weerasethakul