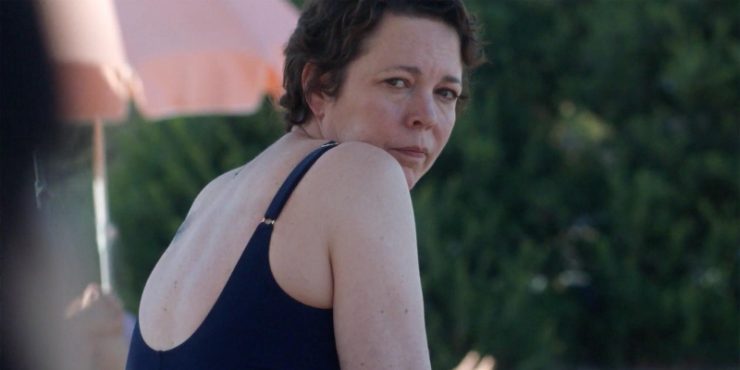 The literature of Elena Ferrante is rife with inner passions and women on the edge of emotional collapse. These women are often running away from their troublesome pasts (and physically running away from Naples, Italy), suppressing painful memories of abuse and scandal. The Lost Daughter is no different, tracking one woman’s unraveling on a Summer holiday. In her feature debut, Maggie Gyllenhall chooses one of Ferrante’s more interior works, where the action plays almost entirely in the mind of Leda (played with perfection by Olivia Colman), whose own fraught history with motherhood rises to the surface when she encounters a young woman and her daughter at the beach. So much of the story is just watching and thinking and remembering, but Gyllenhaal manages to make it something special. Something cinematic.

Leda is a professor of Italian literature from Cambridge. She rents a home in a coastal Greek village for a work holiday but she instead becomes infatuated with Nina (Dakota Johnson) and her young daughter Elena. Nina is at the beach with a large, rambunctious family group that makes loud noise and wreaks havoc for fellow vacationers. When one member of the family is having a birthday party, they expect everyone on the beach to give up their seats and umbrellas to accommodate them. When Leda refuses, there is a brief frostiness between her and the family, but that quickly fades when Elena briefly goes missing and Leda is the one who finds her nearby. Distraught, Nina is grateful for Leda’s deed, and the rest of the family comes to respect her. Soon after the incident, heading back to the house, she realizes that she has taken Elena’s toy doll and hidden it in her purse.

Why does Leda do this? That question is the key to everything in The Lost Daughter, which never comes close to answering but makes pains to give Leda enough context that the behavior is more understandable. Elena becomes bereft without her doll, crying constantly and even running a fever, but still Leda holds onto the doll, an action that becomes more unexplainable as the film goes along. Nina’s interactions with Elena – and to a lesser degree, her relationship with her uncouth family – transport Leda to memories of her own young motherhood. An equally brilliant Jessie Buckley plays the young Leda, still married, volleying an upstart career as a scholar with the frequent responsibilities of raising two demanding young daughters. In Greece, Leda makes soft illusions to her own unhappiness as a mother, but the flashbacks display real emotional and physical pain. Leda feels her life being sucked away by her children and her dependable but static husband.

A pretty straightforward drama, Gyllenhaal stages The Lost Daughter as a disorienting psychological thriller, shooting her sequences in claustrophobic, handheld close-ups, keeping our vantage point frequently obscured, a chunk of the frame always partially off screen. The effect is stunning, dizzying the audience as Leda’s mental state becomes undone. Gyllenhaal’s script and direction is successful in translating the unnerving inner conflict roiling within her characters. This not only makes for a compelling story, but is also a perfect distillation of what makes Elena Ferrante’s books so powerful. The thin line between passion and pain – a tantalizing middle ground where her books ingeniously live – is brought to life vividly by Gyllenhaal who proves to understand the logic behind the illogical decisions that Leda makes.

Colman, already a beloved actress and already an Oscar winner, gets her best movie role yet. At first glance, Leda appears to play against her patented sense of humor, but Colman finds devilish ways to imbue Leda with scathing wit. The role is a difficult one. Leda spends most of the movie simply watching other people, and projecting her own feelings and history onto them. That Colman is able to accomplish this mostly through worried glances and forced smiles is special indeed. Buckley, as the young Leda, has the benefit of action, accomplishing all of the misdeeds that haunt Leda decades later. The two performances compliment perfectly even as they differ in tone. For a film that relies so heavily on flashbacks, The Lost Daughter does an excellent job of making them feel like a full character, and not two disparate halves of one person.

This is a stunning debut feature, one made with confidence and skill. The performances, bracing and unnerving, work toward the Cassavetes-like, anxiety-inducing mood that the film is striving toward. It’s no surprise that an actor with the skill of Gyllenhaal’s would prove to be so good at guiding actors in her own film, but it’s the way she attacks the material visually that impresses. At its heart, The Lost Daughter is about maternal ambivalence, the push and pull of parental responsibility and how the strain often pulls harder on women. Leda is a character haunted by decisions she made in her own interest. Gyllenhaal is clear-eyed in her treatment of her, not shying away from Leda’s fight-or-flight responses. We don’t have extensive knowledge on how this behavior has affected her children, but we can see that it has stayed with her, and will stay with her forever. Gyllenhaal and The Lost Daughter display that self-imposed prison perfectly, in a film that extrapolates its tiny premise to tragic proportions.

Written for the Screen and Directed by Maggie Gyllenhaal