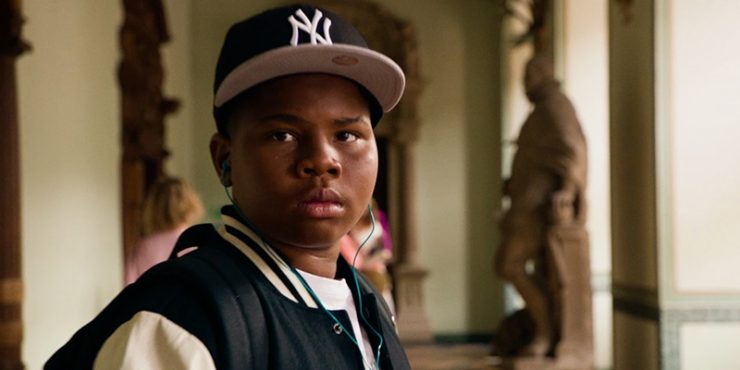 It never really seems like Morris From America has enough story to fill out its 91 minutes. It’s a unique take on the coming-of-age tale, but it never really puts itself into any unique territory. Newcomer Markees Christmas plays the titular Morris, a thirteen-year-old African American who moves to Germany with his father Curtis (Craig Robinson), a soccer coach who’s gotten a professional assistant position overseas. Morris’ mother has passed and Curtis hopes that the new setting will give Morris – a rap-obsessed loner alienated by his peer group – some perspective of the world as he grows up. Few of the other teenagers take to Morris, who still has trouble picking up the language. He takes lessons with a young student-teacher, Inka (Carla Juri), but otherwise has no acquaintances let alone friends. At a local youth center, Morris meets Katrin (Lina Keller), a beautiful blonde who is the only one who seems to pay any attention to him. Katrin is gorgeous, friendly, and actually takes time to listen to Morris about his interests. Very quickly, Morris falls in love and the young man finds himself sucked into the vortex of infatuation, following Katrin into a totally different, occasionally dangerous social circle.

Christmas is playing a very vulnerable part here, and the young actor does a wonderful job portraying the loneliness of displacement, as well as the awkwardness of adolescence. As his father, comedian Craig Robinson is given his first opportunity to play a real part, and his quaint performance is softly effective here. Even in his comedic roles, Robinson has always been able to lend his characters a good amount of heart, and that translates into his more serious work here, as he plays a grieving husband and a struggling father. Morris From America‘s strongest moments are the scenes between Christmas and Robinson, their chemistry and comedic timing together is very strong, and Robinson is smart enough to know when Christmas is meant to be the star of a scene. The rest of the film stagnates in a standard tween romance, and writer/director Chad Hartigan tries to flesh out this film with overwrought slow motion and elaborate shots which do little to add to the story. As Katrin, Keller is giving a fine performance, but her character is the film’s weakest aspect, and Hartigan’s treatment of her feels inconsistent at best, confused at worst. As a showcase for Christmas and Robinson, Morris From America definitely succeeds, but the movie meanders for long stretches for what it thinks are artful asides but what felt to me to be just like time-wasting attempts to reach a feature length.

Written and Directed by Chad Hartigan