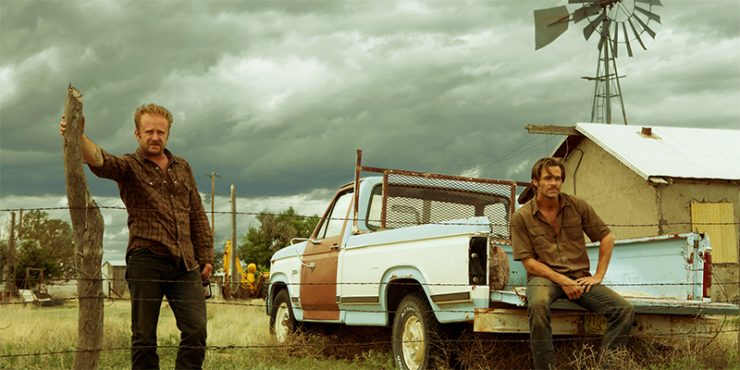 Taylor Sheridan’s screenplay for Hell or High Water is amongst the most masterful depictions of a specific, decaying American culture I’ve seen in a while.

It’s right up there with No Country for Old Men and The Last Picture Show in terms of resonance and execution. Like those other two films, Hell or High Water takes place in Texas, that hulking sprawl of a state that has come to represent so much of the rest of the country, both commendable and repellent. Sheridan’s story has odes to Arthur Penn’s Bonnie and Clyde as well as another Coen Brothers film, Fargo, in that its simultaneous obsession and horror at the sight of senseless American crime and violence is showcased as a pendant of this country’s society. The speed to which things can turn tragic and deadly in America is matched only by the incessant cycle in which these crimes continue to happen. Hell or High Water is a brilliant document to the very people who stand against it while also helping to perpetuate it. The people who stand for justice and peace, but by their actions enact blood and brimstone. Directed by David Mackenzie, Sheridan’s script becomes an epic fable about family, brotherhood, mortality and morality. Backed by a trio of incredible performances, Mackenzie crafts this story with Steinbeck-ian scope, commenting on everything from the cemented racism at the heart of American culture to the crippling power that banks hold over the poor, reinforcing an ever-widening class system enabled by a wealthy few who have no interest in economic balance. Gun violence, predatory loans – the housing crisis, all things so synonymous with the infrastructure of contemporary United States – all manage to make a cameo in this film, and yet Sheridan’s script never gets lost in its own ideas, with a tight story about two criminal brothers and the grey dog trooper bent on catching them before they settle the big score.

Those two brothers are played by Ben Foster and Chris Pine. This is probably the only time that one would ever mistake these two as family, but the performances from the two of them rises above it, their relationship laying the foundation for the film’s plot and themes. Foster is Tanner Howard, an ex-con only a year removed from a ten-year prison sentence, always scratching his eternal itch for trouble. Tanner is drafted by his brother Toby (Pine) to help him raise the money necessary to get the family farm out from under a mountain of loan debt acquired by a naive mother who has very recently passed away. Divorced with two sons, Toby was left the farm in his mother’s will, but he’d rather pay off the debt and give the land to his two sons who can stand to benefit from the farm’s recent discovery of oil. How will the Howard brothers pay off the debt? By doing what Tanner does best: crime. Toby shrewdly plans a string of bank heists, specifically of branches of the very same bank that targeted his mother with the predatory loans that put their land into such turmoil. Toby has a clean record, and doesn’t have quite the stomach for armed robbery, but Tanner is all but happy to assist his little brother in his plan, participating with an enthusiasm that is only part brotherly loyalty, and other part return to his criminal roots. The two make an awkward pair for a bank heist, but on a calm morning, they target two bank branches early in the morning, careful to take only the small bills, stay away from bundles or any money that can be traced. Even with Toby’s reticence, Tanner’s assured, menacing stance in both robberies get the brothers out of the banks with bundles of cash, part of the way through their plan to pay off the bank with their own money.

The two robberies catch the attention of Texas ranger Marcus Hamilton (Jeff Bridges), a gruff-voiced old hand only weeks away from retirement. With his partner, Alberto (Gil Birmingham), Marcus begins visiting the banks after they’ve been attacked. Despite his dogged appearance and rusty approach toward racial language – he often makes jokes at the expense of Alberto’s half-Mexican, half-Commanche heritage – Marcus shows himself to be still very much capable as an officer, with an eye for detail and criminal instinct. Speaking to bank employees, as well as other Texas lonely hearts who cross paths with the Howard brothers, Marcus begins to construct what their next step may be, but the two rangers have limited time before Toby and Tanner complete their surprisingly sophisticated plan. For much of Hell or High Water‘s first half, we’re given two different buddy comedies, each story keeping the oncoming tempest at arm’s length. But Mackenzie strikes such a pitch-perfect rhythm here, always keeping the audience on edge, alluding to the bursts of violence and pain just around the corner. As Toby and Tanner both search for redemption – for Toby, it’s about making up for his absentee fatherhood; for Tanner, it’s about proving that he belongs in the family that has tried so hard to ostracize themselves from him – Marcus wanders through the land, stoic in the face of danger but still bewildered by it. He is highly able in stopping the bad guys, but he still has a hard time understanding them. And here, we have the two opposing visions of the American dream: the ruthless ones who make their own fortune without care or attention paid to those who may stand in the way versus the image of justice, the ones who stand for compassion and strength of morals. Very often the former is the one that comes out on top.

Jeff Bridges has been around for so long, it’s such a wonder that he always manages to be so unique with every performance. Playing Marcus like a worn down sheep dog, he imbues the film with a startling example of a type of America that is slowly being rolled over, scrubbed from existence. Marcus watches over the small towns, endeared by their quaint emptiness, only marginally understanding that they’re actually bloated corpses left behind by the greed of corporate banks. Marcus fears the end of his career, much in the way that he fears the end of the society that he loved, and Bridges shows all of this so fluidly and sharply. Playing alongside Bridges, Birmingham is terrific as well, as a man with feet in both doorways, he appreciated the simplicity of the bygone era, but is fine to see it go if the institutionalized racism that has marginalized him and his people goes with it. Foster has spent a decade being one of Hollywood’s greatest menaces. There’s an intensity with every performance, an implied danger. His work in 2009’s The Messenger still goes criminally unseen. There’s no difference here, his Tanner comes with baggage that he’s not afraid to unload. Foster accepts Tanner’s fallibility, even his evilness. There’s complexity to this character, as with every character Foster plays, but what’s brilliant about Foster’s performance is how he understands the simplicity as well: Tanner is a career criminal with few loyalties, and those getting in the way of those loyalties easily end up as collateral. Pine, as the mild-mannered Toby, gives the best performance I’ve ever seen from him. Toby resorts to evil when the good life had left him with nothing but poverty, but it’s an incredibly difficult decision. Pine fills Toby with measured anguish, with the ability to commit the crime but also with a soul that leaves him haunted.

I can’t say enough about Sheridan’s screenplay. The actor-turned-scribe wrote last year’s Sicario, which was a film I wanted to like a lot more than I ultimately did, but my qualms had little to do with his script. He’s proving himself in short order to be a singular voice, with a studied attention to the issues that cause America’s penchant for violence. Sicario‘s script got drowned by Denis Villeneuve’s overwrought stylization, but Mackenzie is a smarter director here. He understands the power of the words and lets them speak for themselves. Of course Mackenzie, the veteran Scottish director behind Young Adam and Starred Up, isn’t shy as a formalist either. With cinematographer Gilles Nuttgens, he shows the flourish of the expansive landscapes of West Texas; and with editor Jake Roberts, he lets the film hum beautifully along, the two narratives running parallel toward a bloody end. I feel I must return to the Coen Brothers and Arthur Penn. Jeff Bridges’ Marcus feels so much like Fargo‘s Marge Gunderson (the competence and stunning insolence in the face of crime) as well as No Country‘s Ed Tom Bell (the dour smallness in the face of senseless violence). Those two films are masterpieces with remarkable touches on the opposing forces of good and evil in Middle America. Another masterpiece of small town US is Bonnie and Clyde, whose fateful journey through bank robbery runs underneath all of the actions by Toby and Tanner. I can’t help but think that all of this homage is the work of Mackenzie, who had a great sense of what Sheridan’s script says not only about America but how it comments on films with the same argument. Hell or High Water feels like a peer amongst those legendary tales, an expertly told tale of fierce opportunism and the men whose job it is to stand in the way. This is an incredible movie in all ways and forms, and stands amongst the best of the year.