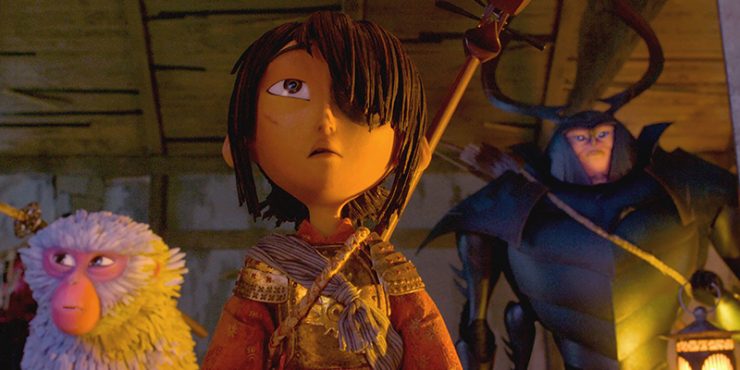 If Pixar has stood out amongst animation studios for its unmatched critical and commercial success, than Laika has also stood out, for its dogged dedication to the labor-intensive art of stop-motion animation. Travis Knight has been the lead animator at Laika since 2005, and has been instrumental in the studios recent boost, producing Coraline, ParaNorman and The Boxtrolls. The studio’s latest release, Kubo and the Two Strings is Knight’s directorial debut. The film, which borrows heavily from various mythologies interwoven through Japanese culture is able to produce quite a mythical quality. It’s also probably their first film to truly attempt the kind of heart-wrenching sentimentality of Pixar. Laika has always stood out to me for its courage to embrace the more grotesque nature of animation. They took the aesthetic of Tim Burton and really expounded on it, didn’t allow themselves to get boxed into their own style the way Burton has. The unfortunate fact that Kubo‘s Japanese characters are almost exclusively voiced by white actors slacks at the film’s credibility as a true homage, but Knight fills the film with such wondrously beautiful images. The disconnect between head and heart here is apparent, but Knight knows how to craft a well-made film, and Kubo is amongst the best animated films I’ve managed to see this year.

The young Kubo (Art Parkinson) has lived with his mother (Charlize Theron) in a high mountain haven after Kubo’s father, Hanzo, was killed protecting them from Kubo’s evil grandfather and aunts. Kubo did not escape completely unharmed, with one of his eyes stolen by his evil family. During the day, Kubo visits the local town to perform his musical magic show where he uses origami to tell the heroic tales of his father, but his mother demands he come home by nightfall. When curiosity gets the better of him, Kubo stays in town too long and he’s immediately tracked by his aunts who seek his one and only eye. With his aunts and grandfather on his tail, Kubo seeks the magical sword and armor that Hanzo was unable to reach in time before his unfortunate. As help, he has a monkey (also voiced by Theron) and an overgrown beetle (a de-drawled Matthew McConaughey), as the three search the landscape hoping to find the tools Kubo needs to defeat his evil family and protect those he loves. Kubo and the Two Strings is such a beautiful argument for love and compassion, and surprisingly pointed mediation on family and mortality. Maybe I don’t totally buy Kubo‘s central thesis of love conquers all, but Knight’s film makes a stirring case, supported by engaging visuals, exciting action set pieces and solid voice acting from its cast.