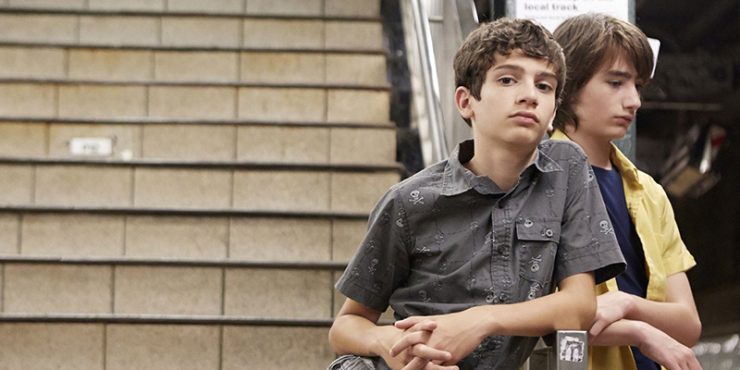 Ira Sachs’ last two films are such a beautiful distillation of everyday life, a peep into the domestic sides of New York City living that is both poignant and direct. 2014’s Love is Strange was a wonderful drama about getting old, being in love and overcoming the same prejudices over and over again. His latest film, Little Men, is about two teenagers, growing up in residential Brooklyn, who become unlikely friends. The pair of young actors that Sachs was able to find here is the film’s key. Theo Taplitz and Michael Barbieri show a stunning alacrity for displaying youthful enthusiasm, arrogance, even at times real true sadness. The loneliness of adolescence is oppressive at times, as your world view becomes less solipsistic and more aware of the realities of life and what you’ll face. It’s a godsend if you’re able to find another who can help you understand this challenging period. Little Men is about that moment when you find that one friend who can help you cope with growing up, and how the realities of adult life will always manage to get in the way of the struggles of children. InLove is Strange and now Little Men, Sachs takes a deep dive into the uncomfortable minutia of maturity, responsibility and family, and comes out with a film that has a sense of humor about its own form of tragedy. These lived-in stories have a refreshing tone compared to most films about New York, and with Little Men, Sachs continues to show that he is an exceptional storyteller.

Taplitz plays Jake Jardine, an artistic introvert approaching high school who learns in quick succession that his grandfather has died and that he and his family will be moving from Manhattan into the grandfather’s spacious apartment in Brooklyn. Jake’s father, Brian (Greg Kinnear), is a struggling actor working in non-profit productions, and his mother, Kathy (Jennifer Ehle), is a psychotherapist who’s become the family’s main breadwinner. Brian’s father left him the apartment as well as the store he owned underneath it. The store is a modest clothing shop run by Leonor Calvelli (Paulina García), a Chilean woman who enjoyed an intimate relationship with Brian’s father Max, in which she didn’t have to pay exorbitant rent and in exchange, kept Max company and provided the neighborhood with a pinch of culture. As the Jardines move in, Jake meets Leonor’s young son Tony (Barbieri), a Brooklyn-accented extrovert who dreams about being actor when he grows up. Tony’s father lives in Africa, where he spares the family abuse and general discontent. The opposing personalities of Jake and Tony quickly and surprisingly take to one another, as the two bond over their love of the arts and video games. But Brian, trying to settle into his new home, as well as make up for some lost income, must find a way to make Leonor pay a fair rent, and basically make the store profitable, which begins a tension between the two families, which quickly snowballs into a standoff between the desperate Brian and the stubborn Leonor. Throughout the turmoil, Jake and Tony’s friendship only grows, and they try to survive the unrest rumbling around them.

There are no heroes and villains in Little Men, only people moving hopelessly through the world trying to make life for themselves and those they love as comfortable as they can. Kinnear, one of the greatest dependable everyman actors, plays Brian with such sweet sincerity. His position as a talented, intelligent actor still struggling to find success, all while teaching his son that art is a noble profession to pursue, is such a tough balancing act that few other than Kinnear could pull off. Meanwhile, García (of the great Chilean film Gloria from 2014), plays Leonor with a stern perfection. She has a laundry list of things to be bitter about: abandoned by her husband, the death of her close friend, and now the harsh reappropriation of her own neighborhood and business. Leonor is capable of great coldness, but García knows how to imbue the character with the right sense of belonging, never letting Leonor become harsh or uncouth. Sachs has shown he can handle veteran actors, and strong supporting performances from Ehle and Alfred Molina are a testament to his strength with ensembles. It’s his work with Taplitz and Barbieri that makes this film so impressive. The film’s screenplay (by Sachs and Mauricio Zacharias) has a great sense of what it’s like to be a kid, but Taplitz and Barbieri make the odd pairing work so beautifully. There are subtle hints of an ambiguity in regards to Jake’s budding sexuality (inversely, Tony is incredibly heteronormative), but Sachs’ correctly steers away from exploiting his child performers to make some hollow LGBT statement, and focuses on their experiences together. The result is a sweet, heartbreaking tale that shows such a vast understanding of the nuts and bolts of life and family. A remarkable triumph of acting and directing.