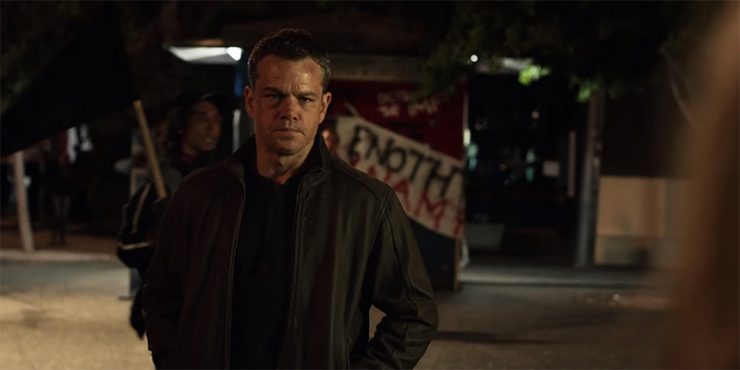 The Bourne franchise isn’t nearly as intelligent as it thinks it is. It’s suggestion of commentary on our political climate is shallow at best, but that’s okay. The original Bourne trilogy was the perfect action series for George W. Bush America, exploring our frustrations and paranoia about our government’s competence. It was tapping into a feeling without saying anything truly interesting about it. At its core, these films are about as escapist as a Transformers film, but even if the films aren’t exactly as sophisticated as they pose themselves, they are backed by strong screenplays (the first three had strong contribution from the great Tony Gilroy) and they at least tell the story of a very intelligent, sophisticated protagonist. Jason Bourne, and Matt Damon’s portrayal of him, is one of the miracles of studio filmmaking this century. It’s hard to think of another movie star who could have played this preposterous character so sincerely and yet make it work.The Bourne Identity was directed by Doug Liman, but since then, all of Damon’s Bourne films have been directed by Paul Greengrass (the Jeremy Renner-starring The Bourne Legacy was actually directed by Gilroy, himself; he has not come around for this latest film). Greengrass has a style that suggests cinema-verité, heavy on steadicam and smash cutting. Greengrass likes films with political bent, and he’s succeeded with United 93 and Captain Phillips, which both managed to translate documentary-style narrative storytelling into commercial and critical success. And yet, I think his Bourne films are the best thing that he’s ever done. Is it possible that his true calling is as a smash em’ up action director? Jason Bourne certainly proves that to me, and with Damon returning to star, one of my favorite film franchises gets an entertaining boost.

Not that it matters but every Bourne film has the same plot, with only a variation on the characters. Bourne has been hiding out, making a living by fighting in bare knuckle fighting rings in Calcutta. Like all the other times, Bourne is tied back into the scheming world of American special ops, this time by his former co-conspirator and Treadstone operative Nicky Parsons (Julia Styles, returning again). Parsons is no longer a government employee, and when she learns that the CIA is once again employing a new army of Bourne-like killing machines – this time, the operation is called Ironhand – she hacks into their files and rushes to get them to Bourne. Back in Washington DC, Heather Lee (Alicia Vikander), the head of the CIA’s cyber ops division, spots the hack as it is happening, but is unable to stop it before very dangerous information regarding Ironhand, as well as Blackbriar and Treadstone are taken. In Greece, Nicky is able to convince Bourne to meet her, where she urges him to take a look at the information she has stolen, suggesting that there is still information about his work and recruitment to Treadstone that he’s still unaware of. His amnesia has finally been cured, but there are still things to know, things that he never knew, that will change his thoughts on the tragedy of his past. Bourne, not wanting to get dragged back into a life of running from government heavies, tries to dismiss Nicky’s insistence, but when Lee and CIA Director Robert Dewey (Tommy Lee Jones) discover that Parsons and Bourne are commiserating in Greece, they immediately send out one of their deadliest killers (Vincent Cassel) to take them both out. And just like that, Jason Bourne is ripped back into the world he’s tried so hard to abandoned, running for his life and running toward the truth, as he learns even more about the government’s poor mishandling of his life.

Jason Bourne gave me what I wanted, but it is silly, empty calories. The placement of Jones as this film’s version of the evil head of the CIA is a nice touch. This is the kind of performance that Jones could do in his sleep, and at times it seems like Jones is actually sleeping through this film. Vikander as the less skeptical newcomer (a role that Joan Allen mastered in Supremacy and Ultimatum) seems a bit out of place. The Swedish actress just won an Oscar for The Danish Girl, and Heather Lee in Jason Bourne isn’t exactly the kind of stellar role you’d expect an actress of her talent and age to get. The character does have some surprises, but it simply doesn’t fit to see her as the cyber ops CIA leader (at twenty-seven?). There’s a subplot involving a hugely successful internet application developer (played by Riz Ahmed) who is becoming reluctant about his uneasy, confidential deal with Dewey and the CIA. As always, there are many allusions to the government’s intrusion into the public’s privacy in the name of patriotism, but this film’s attempts to make a sort of CITIZENFOUR-like statement feels even more superficial than the films before. The screenplay, written by Greengrass and Christopher Rouse, is missing Gilroy’s touch with logic, and while Greengrass knows how to direct an exciting, smashing car chase scene, his grasp of government illegalities is too cynical, and thus, lends itself to hyperbole. But Jason Bourne still has its star, Damon, and in a lot of ways, that’s enough. There’s a comfort in coming into a film like Bourne and understanding that you know everything that will unfold. Damon is the key to that comfort, because his understanding of this character has always been the tide that rose the sinking ship that is these films’ overwrought premise. Damon has been the best actor of all contemporary movie stars for a while now, and in a lot of ways he’s overqualified for the Bourne films, especially this one, but I must admit I still enjoyed the effort.