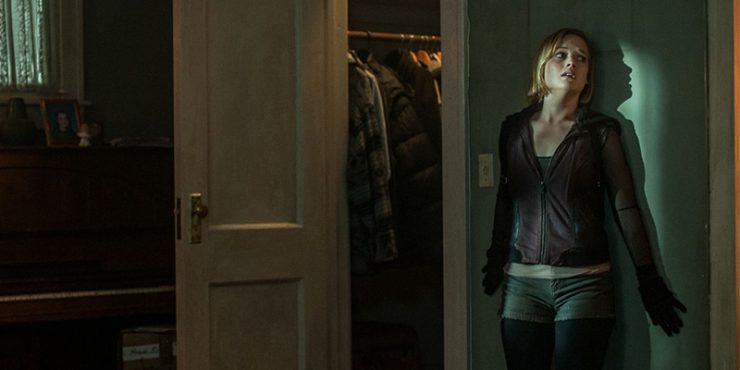 The emergence of the prestige horror film this decade has allowed very strong filmmakers to work within a genre that’s cheap, prolific and comes with a guaranteed audience. Sam Raimi gave Uruguayan director his commercial breakthrough when he pegged him to direct the 2013 reboot of his Evil Dead franchise. Don’t Breathe is Alvarez’s follow-up, a brutal suspense thriller with a claustrophobic premise that rattles its audience till its final conclusion. After The Witch and Green Room, Don’t Breathe is yet another 2016 horror film that has managed to be both a box office hit (#1 in its opening week, with over $26 million) and a critical darling. But Don’t Breathe is the only film of the three to have a strict following of the horror film template, and not aspiring to an art house esteem. My agnosticism towards the horror genre aside, Don’t Breathe carries itself with a tremendous amount of enthusiasm. The film and its characters engage in such a horrid, violent game composed of the most complex, unforeseen angles of morality and ethics. Alvarez’s film works because of its chamber drama-like setup, but a good couple of lead performances helps a lot.

The first act of Don’t Breathe‘s script (written by Alvarez and Rodo Sayagues) is the film’s weakest. For whatever reason, the characters text each other in all caps, which gives you a good idea of the layers of subtlety that these people seem to possess. Rocky (Jane Levy), is a single mother living in run down Detroit, in a house she shares with her horrid mother (the mother has a boyfriend with a swastika tattooed on the outside of his hand, because why not). Rocky is a cat burglar, along with her boyfriend, Money (Daniel Zovatto). Their third partner is the young Alex (Dylan Minette), the son of a locksmith for a home security company. Alex is able to bring the spare keys that gets them into the few wealthy homes left in the decaying city. We know right away that Rocky is too good for Money, so it’s impossible for Alex not to notice as well. What Rocky really wants is to have one big score so she can move her and her daughter out of her mother’s home, and head out to California with Money where their life will really begin. After their latest job gives them less of a profit than initially hoped, they catch word of another job that might just be the big score they’ve been hoping for.

Money is given the information for the home of a man (played by Stephen Lang) living alone in one of the more dilapidated parts of Detroit. After the man’s daughter was run over and killed, a long court case ended with him receiving three thousand dollars in settlement money. Has he spent any of it? Evidence shows that he has just been sitting on the cash, letting it waste away inside his crumbling home, just waiting for someone like Rocky and Money to come in and take it. Doing reconnaissance, they learn that the man is the only person left in his neighborhood, his home surrounded by skeleton houses that barely stand. They also see the man for the first time, accompanied by a voracious, barking dog, and holding a walking stick. The man is blind. Alex, already squeamish about the job’s potential, wants to call it off. Money eagerly wants to proceed, while Rocky, understanding Alex’s logic, simply wants the money in the most desperate way. The three decide to perform the robbery at night with the blind man in the house, and as they slowly breach his tightly secured home (all the windows have bars, all the doors have multiple locks negating the keys Alex brings), they end up face-to-face with the blind man, learning that he is more resourceful – and more dangerous – than they ever could have imagined.

Like a lot of horror movies, the biggest contrivance that you have to overcome is the main characters being stupid enough to put themselves in such a dangerous situation. There are times in Don’t Breathe‘s first thirty minutes where Money seems like such a belligerent, unintelligent blowhard that it’s hard to believe that 1) the sensible Rocky would want to spend any time with him, let alone date him, and 2) that he’d have any success as a criminal while also being so dumb. The very idea of voluntarily deciding to rob someone while they’re still inside the house when you at least know they’re a disgruntled, military veteran (meaning they’re almost guaranteed to have weapons) really underscores the basic premise of their characters, which is that they’re supposed to be good at robbing people. These are the kind of details one is meant to disregard in most horror films, which is why its always been a difficult genre for me to embrace. But a film like Don’t Breathe is at least confident in the way it deals with these concepts, maybe even a little brazen. It knows the instances in which it needs its characters to be smart, and when it needs them not to be – Money is almost exclusively always dumb. The performances from Lang and Levy add to this dichotomy, the two sides of the morally ambiguous coin. Lang’s murderous blind man is the antagonist just trying to protect his home, while Levy’s petty thief is our protagonist. The irony is not lost on Alvarez or the actors, which is why this film works more for me than The Witch and Green Room. It’s not elevating the genre, but perpetuating it, and sometimes that’s the most entertaining option.