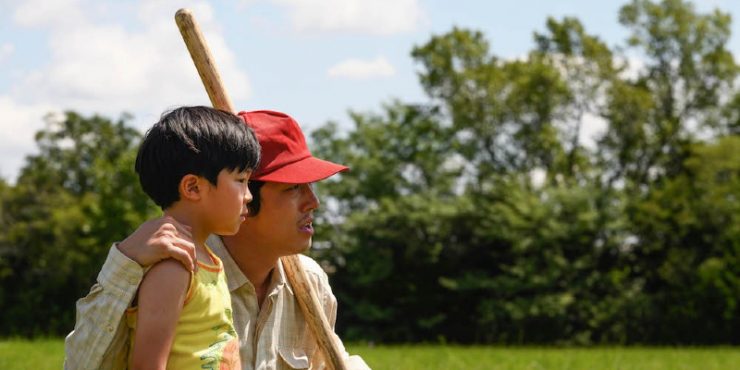 Watching Minari, I was reminded of Tolstoy’s famous line “each unhappy family is unhappy in its own way”. He is both suggesting an infinity of unhappiness while also alluding to a sort of snowflake pattern within each instance of said unhappiness. This versatile description can be used for the family in Minari, the latest film from Korean-American filmmaker Lee Isaac Chung. In the 1980s, the Yi family has just moved from California to Arkansas. Though there isn’t much exposition about their previous lives, it’s obvious from the beginning that this is a massive shift. It’s hard to imagine two American states more different than California and Arkansas. California has the coast, the diverse array of nature and population; but Arkansas has cheap land. The only catch is you have to live in Arkansas.

The move is a sore spot for Monica (Han Ye-ri), though not for her husband Jacob (Steven Yuen). Their young children, Anne (Noel Kate) and David (Alan Kim), don’t have too measured a response, greeting the swampy Ozarks with equal parts awe and befuddlement. They register how much different their new home is, but they also want the transition to go smoothly. Tension mounts upon arrival. Monica doesn’t want to live in a trailer, isolated from people, surrounded by unappealing grassland. But Jacob’s commitment to operating his own farm is fierce, and his pride in succeeding as the head of the family blinds him to the downward trajectory of his marriage. Add to that, the young David has a heart condition, and he’s warned against any strenuous activity. All this open space, and David can’t even run.

Monica and Jacob agree to a compromise, the family will stay in their new home but Monica’s mother, Soon-ja (a fantastic Youn Yuh-jung), will move in with them. David doesn’t take to meeting his grandmother for the first time. She brings odd foods from Korea and curses while playing cards. Worse yet, the two are forced to share a room, when he’s yet to overcome an embarrassing bed-wetting problem. David begins lashing out, refusing to eat or drink what she serves, rejecting any engagement with Soon-ja’s insistent goodwill, but eventually she wears him down. The arrangement keeps the home steady while Jacob tries to get the farm started. His main help is Paul (Will Patton), a good, knowledgable worker with an eccentric tick of breaking into prayer and speaking in tongues. The pressure of the farm’s success only puts further pressure on Jacob’s marriage, which is holding on by a thread.

The film balances between these two plotlines: Jacob and Monica’s disintegration in the wake of the farm and David’s growing toleration (and eventual appreciation) of Soon-ja. One part of the family comes together while another comes apart. The parallel, generational stories of father and son show pride struck down by circumstance. Jacob is caught in between economic freedom and the peace of his family, while David is caught between assimilation to his new home and the old time culture that Soon-ja represents. Both Jacob and David make hasty, emotional decisions that cause staying emotional damage, alienating those who seek most to help them. David learns to coexist with his grandmother, where Jacob only makes it more difficult for Monica to live with him.

The story is a uniquely American one, and while Minari isn’t trying to be provocative, it is noticeable how Chung employs a specifically American narrative to tell this story of an immigrant family. The film is spoken mostly in Korean – the parents have limited English while the children are perfectly fluent, but Soon-ja speaks none – which contrasts against the story of Jacob’s enterprise. Chung doesn’t make this a story of racial assimilation. Most of their white neighbors are friendly, if uncouth on occasion. If anything, they seem to be overcompensating. The Yi family’s struggles are specifically American, not Korean, and for Chung to place that within the Korean language is an especially radical choice, forcing white audiences to restructure how they view dramatic renderings of the American family.

Minari is a sweet, modest, occasionally sentimental film. It’s blink-and-you’ll-miss-it drama will probably become more effective with repeated viewings (this is a movie that I really wish I had seen in a movie theater). Chung’s delicacy with the material and his deft handling of the performances (especially the young Alan Kim who has the difficult job of being the movie’s main point-of-view) helps make this heartfelt film really pop. As the feisty Soon-ja, Youn Yuh-jung gives Minari a needed wild card, both assuaging and aggravating tensions in the Yi family that lie just below the surface. Like many family members, she may not give you what you want, but you might just give you what you need.