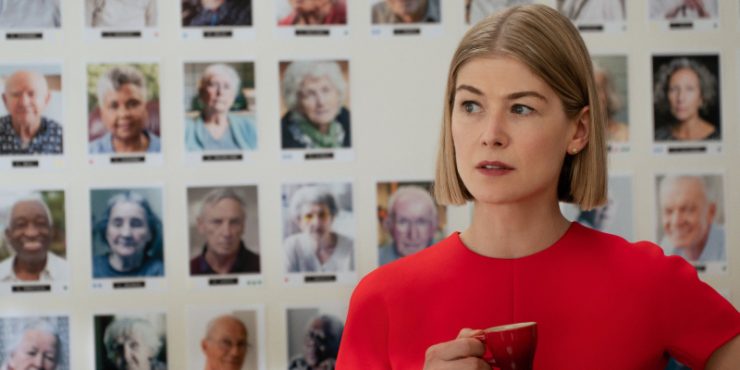 It says a lot about the state of comedies that I Care a Lot can call itself one. It’s not simply that the film is unfunny, but one would be hard-pressed to find a single punchline. The film is ripe with a flippancy that suggests satire but where’s the wit? The actors all play their parts straight, and considering the dire circumstances, there’s not much room for laughter. So what am I missing? When the Golden Globes nominate Rosamund Pike for a performance in a “comedy”, what is their criteria? As film premieres become entangled in the Game of Content, there are more and more examples of films dictating the terms. I Care a Lot is a comedy because Netflix has declared it so.

The situation is separate from the film itself, which is more or less fine, if not muddled by a crisis of tone. It’s a grift thriller with high style and a booming, synth-heavy soundtrack (by Marc Canham). The story has the absurdity of one of the more outrageous Coen Brothers movie, where characters underestimate their own stupidity and chaos follows. The unfortunate thing is that writer-director J Blakeson thinks we’re the dumb ones, and fails to come up with anything clever on his own. I Care a Lot is a film filled with color, elaborate costumes, eccentric set pieces, even the performances (from a very good cast) pop with pizazz. So why doesn’t Blakeson reward us with a story to complement these things?

Pike plays Marla Grayson, a nihilistic businesswoman running a scam that allows her to claim legal guardianship over unsuspecting senior citizens. The arrangement – aided by corrupt doctors, greedy care home staff, as well as one extremely gullible judge – allows Marla to seize their estates and drain it for all its worth before they die, leaving whatever’s left to dejected inheritors. It’s a ghastly scheme but it gets a lot of people paid, and Marla’s talent for wowing outsiders with her glamorous charm keeps any suspecting authorities at bay. She has a partner named Fran (Eiza González), who is also her girlfriend, adding a superfluous exotic detail to her chic con game.

The duo set their sites on Jennifer Peterson (Dianne Wiest), a former businesswoman with no family and a sizable estate. Her solitude makes her a “cherry” in Marla’s business, a perfect mark with no pesky family members to make things messy. In her usual scheme, Marla swiftly uses unscrupulous officials to get Jennifer put under her care, before showing up at Jennifer’s home and declaring herself her new guardian. Jennifer is aghast, abrasive and hostile to this new development. At the care facility, they have to sedate her to stop her from acting out. In going through Jennifer’s assets, she finds a key to a safety deposit box, the contents of which suggest someone much different from a New England retiree.

What follows is a complicated chain of events that includes stolen diamonds, the Cleveland Russian mob, and Peter Dinklage as a fiercely dangerous man who has invested interest in seeing Jennifer removed from Marla’s care. As the evidence increases that Marla has chosen the wrong mark, she becomes more obstinate in the face of danger. Vaguely threatening visits from sleazy lawyers (a fantastic cameo from Chris Messina) only work to convince Marla that she is on the cusp of a major payday. Even the protestations of Fran can’t persuade Marla to let this one go. Marla knows that she may die, but if her plan works, she can be bigger than she ever imagined.

This is probably the most Pike has ever reimagined the amoral apex that was her performance in Gone Girl. That film was made by David Fincher, who relishes discomfort and has no qualms crushing your hopes in any specific character. Here, Blakeson takes another remarkable Pike performance and frames it as #girlboss gone bad. It’s not enough that Marla is without remorse (the film’s only legitimate joke is the irony in its title), but her performative obtuseness can also turn into next-level survivalist skill whenever the film needs it. I don’t like to include spoilers but suffice to say I Care a Lot provides no evidence that Marla should possess the KGB-level skills that she showcases in the film’s third act.

Almost by necessity, the story becomes more ridiculous as it moves along, all leading to a showdown between Pike and Dinklage. Blakeson proves unable to manage the fact that both characters are abhorrent, forcing him to make a hero out of Pike’s Marla, a true #girlboss after all. This would be fine if I Care a Lot had any actual sense of humor about itself or if it actually did treat itself like a satire. But it doesn’t. Its neon lighting and house party score doesn’t automatically make it a satire, nor does it go far enough to mimic the Safdie Brothers’ pastel carnage. It’s stuck in the middle, unsure of itself, giving you more style where it lacks in substance.

The performances save the film. Outside of Pike, Dinklage and Wiest are excellent as two figures whose outside appearance masks a more sinister reality. But they’re unable to wallpaper over the direction, which seems unable to strike the right balance for this story. The ending, which is meant to be a shocking moment of irony, feels instead like a thudding comeuppance, a violent catharsis that is too little too late. It’s easy to see where this film wanted to go, which makes it all the more baffling that it failed to get there.

Written and Directed by J Blakeson