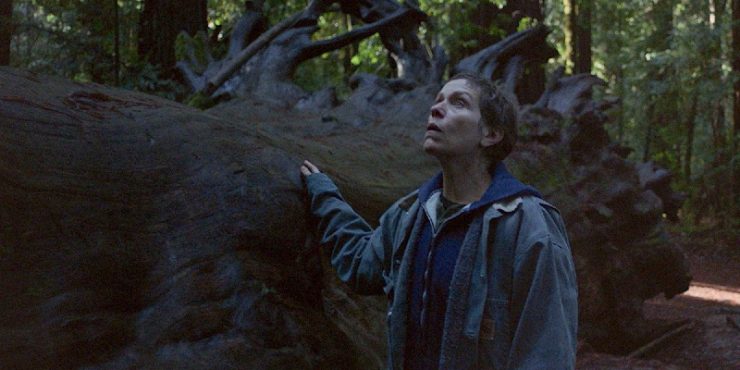 The adventure of discovery has long been a major part of American mythology. Even after explorers and colonists reached the Pacific, large swaths of the American public are still pushed toward what’s next, what’s new, what’s out there. This is the premise of Jessica Bruder’s book, Nomadland, which charters a phenomenon of older Americans packing up and living on the road, going from town to town, looking for work where they can get it, and living out of their campers. This behavior was not a spontaneous occurrence, but was brought on by the Great Recession, which destroyed not only jobs, but entire towns. In one case, an entire zip code (encompassing the company town of Empire, Nevada) was dissolved after the work was removed. These people needed to find a place to go, and they chose the road.

Director Chloe Zhao’s adaptation of Bruder’s book is less journalistic and more exploratory. Much like her previous film, The Rider, Zhao prefers the real thing, enlisting non-professionals to act as filmic versions of themselves, blending elements of documentary and narrative. The result is a hyper-realism that still feels nestled in the artificiality of a story, a fusion that brings out the most compelling aspects of both mediums. Unlike The Rider, Nomadland does acquire the talents of a professional actor, two-time Oscar-winner Frances McDormand (okay, and David Strathairn). The casting of McDormand as Fern adds another layer to Zhao’s experiment. In a film filled with natural acting, how does a scrupulous performance fit within that? That tension is a lot of what makes this film so interesting.

Nomadland was the darling of an odd, truncated festival season last Fall, where mega premieres were streamed on laptops and word-of-mouth was meant to sustain for months until the film finally landed on Hulu this weekend. Zhao was already beloved for The Rider, but Nomadland – and specifically McDormand’s casting within it – felt like a natural evolution for an independent director, including star power into her already esteemed resume. Of course, it was McDormand who optioned the book to begin with (she is one of the film’s producers), and it was McDormand who hand-picked Zhao based on The Rider. Zhao is far from the first indie filmmaker to be tagged by a Hollywood actor to direct their next project, but rare is it when the filmmaker takes the opportunity to rubber-stamp their own non-mainstream aesthetic.

Once you get past the hang-up of an actor of McDormand’s star-wattage mingling amongst real American nomads, it becomes obvious how perfect she is for the part of Fern. Especially in the last decade, McDormand’s screen persona has become one of severe no-nonsense posturing shielding inner torment. Controversy aside, her performance in Three Billboards Outside Ebbing, Missouri was a maelstrom of grief and ferocity. Her work in Nomadland is much less pyrotechnic and the rage is replaced by melancholy. Fern has a warm, inviting personality, but she still keeps people at arm’s length. This includes her own sister, Dolly (Melissa Smith), who will lend Fern money even though she still doesn’t understand her sister’s choices; as well as Dave (Strathairn), a fellow nomad who may have a crush but has trouble convincing Fern to embrace him as more than a friend.

Zhao is cagey as to how Fern ended up here. We do know that she was a member of the Empire community that was discontinued. We know that she’s a widow, unshy in mentioning her own sustained grief from her husband’s illness and eventual death. It would be convenient to frame her choices as running away from something, from the pain of that grief or the stress of survival, but Nomadland does none of that. The film has a comfort with Fern’s unknowability that the audience may not share. Her unwillingness to conform to the norms that possess her family and former friends, even some of her fellow nomads (where a lot of her peers have more accommodating mobile homes, she sticks with a “ratty” white van perpetually teetering on breakdown), is occasionally bewildering but not surprising.

Even McDormand, so flawlessly filling this character with grace and independence, stops short of serious exposition. Fern chooses to be singular, much like the rest of her community; and yet, there is still a sadness latent throughout the film. Presented against the tinkering music of Ludovico Einaudi, Nomadland‘s gorgeous natural images are contrasted against Fern’s self-enforced isolation. Her obstinacy toward any form of charity forces us to consider how much of this is choice and how much is acceptance. There is no Kerouac-ian romanticism, but there’s no harrowing details of destitution either. We may be mortified that Fern is relegated to shitting in a plastic bucket but she sure isn’t.

One may recall Sandrine Bonnaire’s Mona in Agnès Varda’s Vagabond, who’s own stubborn choice to live life on the road led to tragedy. Varda was another director who preferred existing in between narrative and documentary, but where Vagabond finds dread in a world that punishes individualistic women, Nomadland is more contemplative, unready to commit to any causal explanations. It’s difficult to know how much Fern’s loneliness stems her travels or vice-versa. Zhao relishes living in that limbo, keeping the audience at bay much in the way Fern wards off anyone looking to get close. It’s really Zhao’s camera (cinematographer: Joshua James Richards) that is most inviting, enveloping us in astonishing natural imagery that makes a better case for Fern’s lifestyle than any explanation she could provide.

Nomadland has no grand statements about the Great Recession or the poverty it caused. It lacks much of any agenda, choosing instead to focus on the dogged persistence of humanity. Disavowing common human comforts, whether by choice or circumstance, seems to do little harm to the spirit. The stable of performers outside McDormand and Strathairn give the film both a dose of authenticity and a legitimate poignancy. Some are better off than others, some are more securely housed, but all seem possessed by a need to exist on their own terms. Characters like Swankie and Linda May (who both get billing alongside the two name actors), can speak to Fern’s lifestyle with more validity, and do so without disrupting Zhao’s structure. Zhao sees wonder in a lot of it, forever redirecting us toward the beauty of this world, if we’re simply willing to look at it.

Written for the Screen, Directed and Edited by Chloé Zhao