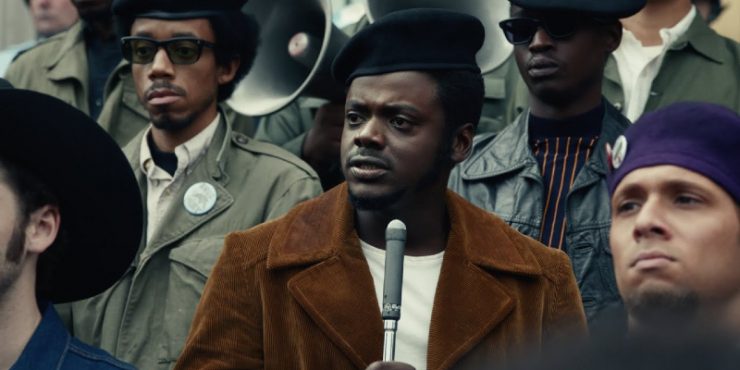 Early in Judas and the Black Messiah, Bill O’Neal (played with frantic perfection by Lakeith Stanfield), finds himself in a police interrogation room. He’s just been arrested after impersonating an FBI officer in a creative attempt at car theft. When he’s greeted in the room by actual FBI agent Roy Mitchell (the ever-dependable Jesse Plemons), Bill now has a gash on his forehead. Director Shaka King never explains where that gash came from, but we know. Roy is curious about Bill’s rouse. Why impersonate an officer? Why not just use a knife or a gun? “A badge is scarier than a gun”, Bill responds, unknowingly explaining the wide scale of coercion and intimidation that the police display throughout the community. Roy is fully aware of that scale, but he listens, amused. Bill’s revelation exposes him as a mark, and Roy is ready to turn the screw.

Later in the film, about halfway, after Roy has successfully gotten Bill to go from impersonating an FBI officer to impersonating a Black Panther, Roy gets a sit-down with FBI director J. Edgar Hoover (Martin Sheen in a truly cursed hair/make-up combination). Hoover lays out “what’s at stake” in their “war” against the Panthers. If you’ve seen Sam Pollard’s brilliant documentary out now, MLK/FBI, you’ll know that the Bureau was also at war with Martin Luther King’s civil disobedience. (The two films are remarkable compliments to one another and would make a stunning, if dour, double feature.) At this point, Roy has already witnessed the FBI seep into deception and illegality in this “war”, and Hoover’s words feel vaguely threatening. Shaka King seems to be telling us: Roy Mitchell is a mark as well.

And so, from the very start and throughout, Black Messiah precisely and expertly portrays how the menace of law enforcement trickles down, person-to-person, until it unleashes itself into Black society. Using the threat of a prison sentence, Roy gets Bill to turn informant, and plants him in the Chicago chapter of the Black Panther party with the mission of getting close to Fred Hampton (a bombastic, powerful performance from Daniel Kaluuya). From the beginning, Bill proves to be more sympathetic to Hampton and the Panthers than the FBI, who views them as terrorists. But Roy is an expert manipulator, equating the Panthers to the Ku Klux Klan, ennobling Bill’s fraught situation with the honor of “justice”. And when that doesn’t work, Roy turns to an old favorite: the threat of prison for car theft and impersonating an officer.

Bill quickly sees the Panthers for who they are: a group dedicated to black liberation, more focused on free meal programs and building medical clinics than enacting terror. Their famed weaponization is for protection, not altercation. Fred Hampton, outside of his verbose speeches, proves to be mild-mannered, with a singular focus on revolution. Idolizing the likes of Che Guevara, he knows that his life is in perpetual danger, but that is an acceptable price for freedom. He puts the people’s lives above his own. Bill gains his trust by becoming his driver, and then later becoming the Chicago chapter’s head of security (there are vague hints that this seems to be the prime hiding spot for informants); and he proves himself a legitimate asset for protection when he foresees an attack on Fred in a local bar and protects him with a pool cue. As Bill gets deeper into the Panthers, and closer to Fred, the pressure grows from Roy, who has orders to take Fred Hampton down by any means necessary.

Most people know Fred Hampton’s fate, so there’s little reason to mention it here. Judas and the Black Messiah obviously wants us to think of Hampton as more than just his ultimate end. The film is told through the eyes of Bill O’Neal, but it still manages to color in the layers of Hampton’s life and personality. His relationship with a young poet, Deborah Johnson (Dominique Fishback), gives the film some much-needed softness, a romantic reality within his militaristic persona. You may find yourself wondering as you watch, why has it taken so long to see a mainstream film about Hampton or about the Black Panthers? An uncomfortable reality will arise (especially for white viewers, like myself) that since that moment in time, we’ve been sold Hoover’s fallacy, and mostly believed it.

Hoover called it a war, and Shaka King makes pains to show that it was a war indeed, with plenty of bloodshed and a definite winner. I reference the interrogation scene early in the film again, where one of the first questions that Roy asks Bill was if he was upset about the killings of Martin Luther King and Malcolm X. Bill’s response is cagey and pratical. We don’t know enough about him yet to grasp what he truly feels but we know enough about that situation to glean that there’s a right and a wrong answer. And we know that the FBI will associate any groups formed for Black liberation no matter how opposed the dogmas may be. The war is not against terror, but against Blackness itself, and Roy weaponizes Bill’s own weakness and self-hatred against him, but it’s just a single event in the systematic war against the decade’s Civil Rights Movement.

Judas and the Black Messiah is sobering for obvious reasons, but it’s also quite charming and rhythmic. It has a sense of humor about the absurdity of its situation and a glowing heart for the people involved. King’s film is also cinematically rich. Cinephiles will notice nods to Gillo Pontecorvo’s The Battle of Algiers or Spike Lee’s Malcolm X, two classics tasked with setting the historical record right (and both are also on HBOMax alongside Messiah, and are begging to be watched if you haven’t yet). The film is shot by Sean Bobbitt, a frequent collaborator of Steve McQueen, and throughout we can see the stark immediacy of his camera. Editor Kristan Sprague strikes the right tempo within the film’s dual energy of melancholy biopic and espionage thriller. The film’s score, by Mark Isham and Craig Harris, haunts and surprises in all of the right moments.

Over a hundred years ago, D.W. Griffith’s The Birth of a Nation was the first film to ever be screened in the White House, and President Woodrow Wilson famously stated that it was “like writing history with lightning”. Wilson’s proclamation was a major endorsement for a film that glorified the KKK (and subsequently led to the hate group’s strong reformation in the 1920’s). Judas and the Black Messiah is both a hard rebuke of Griffith’s racism, while also a stunning example of what Woodrow meant when describing the power of cinema to define historical moments. Its performances – led by the brilliance of Stanfield and Kaluuya – work hand in hand with King to create a powerful document of the persistence of Black Power against the monolithic evil of White Supremacy. This truly is history written with lightning.