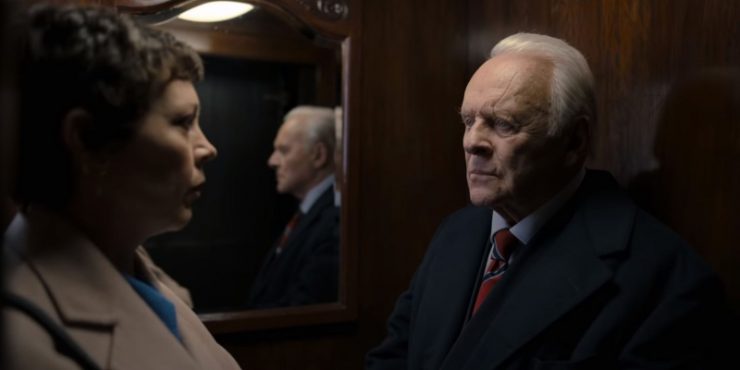 There are few things that Anthony (Anthony Hopkins) needs to be comfortable. Sitting in his flat, headphones plugged in, listening to classical music while wearing his favorite watch; this is all he needs to be content. You can imagine how distraught he becomes when he learns that those comforts of home are about to be uprooted. His daughter, Anne (Olivia Colman), has lost patience with his penchant for chasing away caregivers with his acid tongue and scorched temper. Anthony has become more than she can handle, while he maintains that his way of life is perfectly fine. What can possibly be so hard about letting him alone?

At 83, Hopkins has little to prove as a performer. The Welsh actor’s name is synonymous with prestige and professionalism; not quite the esteem of Olivier and Gielgud, but a formidable reputation nonetheless. Just two years ago, Hopkins shared the screen with Jonathan Pryce in The Two Popes, and showed for the first time in decades that he still has the fight for meaty material and daunting monologues. That was perhaps a good trial for The Father, a film in which he does not have a co-lead to help carry narrative burdens. Florian Zeller’s film (based on his stage play) functions solely within the mind of Anthony Hopkins’ Anthony (the name match is just one of the film’s elliptical details), a man so troubled by his condition, he believes that something dastardly must be the cause of it.

His condition is dementia. While it’s never said directly, The Father isn’t coy about Anthony’s state of mind. From the beginning he is confused, unsure, frustrated. Scenes and realities reset themselves in front of his eyes. At one moment, Anne is warning him of her upcoming move to Paris, and the next she was never planning to leave London. At first, it appears he’s getting a new caretaker named Laura (Imogen Poots) who bares a striking resemblance to his younger daughter Lucy. At other times, he seems bound for a care home. Days and conversations blend into each other, and Zeller (with editor Yorgos Lamprinos), keeps the film moving like a nightmare carousel, things continually being given and taken away, faces and names changing like the wind.

The set-up is a unique one – I don’t believe I’ve seen a film tackle this subject matter in this specific way – if overly clever. Zeller takes this daunting medical condition and breaks it down into cinematic terms. Other actors (Olivia Williams, Rufus Sewell and Mark Gatiss) enter in and out of the movie, playing different versions of the same characters, or vice versa. Even Anthony’s demeanor fluctuates based on the set-up, bouncing between erudite cruelty and stumbling vulnerability. The gotcha moments are clear before they arrive, and perhaps that’s the point. At times, The Father becomes something like a thriller, though there’s hardly any suspense that the version of events we’re seeing are in any way reliable.

Which is why I return to Hopkins, whose performance as Anthony is so funny and so heartbreaking. The versatility of the part makes it coveted for any serious actor, but Hopkins truly grasps the horror of his character’s predicament. There are slight suggestions of Anthony’s life before his illness – a cultured but serious engineer, who perhaps only loved one of his daughters but is now stuck with the other – and there is a hinted irony to his past cruelties being paid forward in kind. He confronts this with long passages, extolling his usefulness, as if his talking is what keeps the horrible truth at bay. As a man who “has his ways”, he is now imprisoned in his own mind, which constantly feeds him misinformation about his own existence and those around him. It’s an unfair fight, and Hopkins portrays Anthony’s long, drawn out resignation with shattering honesty.

There is something inherently deceptive about a narrative film that intentionally fudges the narrative as you’re watching it, not to confound but elucidate. The Father really only overcomes this because Hopkins himself is so sincere, meeting his ever changing surroundings with the same nonplussed attitude that the audience does. I’m squeamish at the prospect of “creating dementia in film”, or further more, of using its destructive forces to construct cinematic concepts, but I must admit that Zeller utilizes it in interesting ways. In the end, The Father very much is a thriller, in which the villain is coming from inside the house, or more precisely, inside your mind.