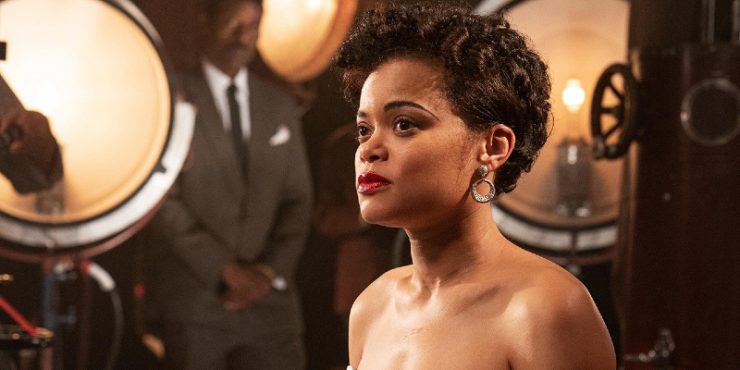 There has always been a contradiction central in all of Lee Daniels’ movies. There is a part of his films that strive for prestige, for mainstream recognition of black lives, good and bad. But Daniels’ talents lie mostly in bad taste melodrama, the kind of sweaty, sex-crazed B movie sleaze that results in a film like 2012’s The Paperboy, his most unhinged and unapologetic deep dive into lower class misdeeds. His most famous film is Precious, another seedy exhibition of black poverty that sidestepped camp for sincerity and won two Oscars. The truth is that this push-and-pull in Daniels’ films – the constant fight between upper and lower class sensibilities – is often a more interesting subplot than the movies themselves.

All that said, Billie Holiday is perhaps the perfect historical figure for Daniels to tackle. Holiday is a legendary singer, a groundbreaking black artist, as well as tortured soul with a crippling drug habit. We already have a classic Holiday biopic, Sidney J. Furie’s Lady Sings the Blues, which was a huge hit in 1972 and got Diana Ross an Oscar nomination for playing Holiday. Daniels’ new film, The United States vs. Billie Holiday, claims to have a more narrow view. The title alone suggests a conspiratorial plot, a massive injustice, a targeted woman. And indeed, this new film does focus a bit on the FBI’s sustained interest in Holiday (played by Andra Day, in a phenomenal performance), but that does not stop Daniels from playing the same notes from the Great American Songbook of biopics.

From the start, the film makes its central thesis clear. The United States government – and specifically, the head of the Federal Bureau of Narcotics, Harry J. Anslinger (Garrett Hedlund) – is so perplexed by Holiday’s stirring performances of the song “Strange Fruit” (a song that damns the practice of lynchings in Southern states), that a plan is put in place to catch Holiday on drug charges to stop her from continuing to sing it. Anslinger taps Jimmy Fletcher (Trevante Rhodes), a young agent, to probe Holiday’s crew and set her up on drug possession. The work clearly grates on Jimmy, who is a fan and appreciator of Holiday’s and has little interest in aiding the Bureau’s demonization of her.

The film’s script (by playwright Suzan-Lori Parks) wanders off, making stops in the famed tragedies of Holiday’s childhood (raised in a whorehouse, raped at the age of 10). There is a framing device presented within a retrospective interview between Holiday and a flaming (fictional) radio journalist named Reginald Devine (Leslie Jordan), but the commitment to that wavers. There are appearances by Holiday’s eventual husband and tyrannical business partner Louis McKay (Rob Morgan), as well as Talulah Bankhead (Natasha Lyonne). At 131 minutes, Daniels places it all in the film while occasionally remembering that this is meant to be the story of Holiday’s fight against the feds. (In a truly bizarre detail, this film is claimed to be an adaptation of Johann Hari’s Chasing The Scream, in which Holiday’s story is only a minor portion in a book about the larger racialization of America’s War on Drugs.)

Plainly, the film is a mess, but the usual mess that Daniels likes to put together. Scenes unroll as if there was no consideration for what came before it, even the performances sometimes contradict themselves. In the movie’s most ambitious set piece, Holiday wanders into a horrifying scene where a black family’s home has been burned and the mother lynched, and then ambles into a nearby home where her sense of reality melds into a montage of her life’s trauma, ending in her walking onto the stage to perform, the only place where she’s felt really safe. That scene’s heightened drama (it’s the only sequence where it really felt like Daniels and Parks are on the same page) is an aberration in a film that is mostly uneven.

But then we have Andra Day, whose performance as Holiday is not simply good, but star-making. It’s not merely the mimicry of recreating a legend, or the fact that Day sings all her own songs, but her ability to carry a movie this haphazard is not common. Day, who was recently nominated for an Oscar for her performance, is fully committed not only to the singing and not only to Daniels’ demanding physical style (he gives her some Monster’s Ball-style love scenes), but to elevating the whole material. It’s a touching rendition and one that obviously carries a reverence for Holiday’s spirit and an understanding of her missteps. Like in Lady Sings the Blues, Holiday proves to be a tremendous part for an actress to tackle, and Day is truly a revelation.