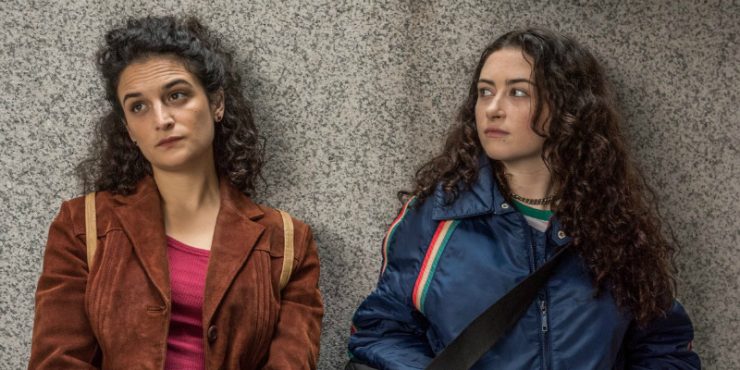 Landline is the kind of narratively messy, tonally skelter New York City indie I can get behind. The film reflects its characters who are all exploring various modes of misbehavior, sometimes uncomfortably so. This is director Gillian Robespierre’s second feature film after 2014’s Obvious Child which also managed to find charm in the navel of life’s most uncomfortable moments. Obvious Child was a polished screenplay (that had originated as a 2009 short film), where Landline‘s script (by Robespierre and producer Elisabeth Holm) is a bit of a jumble, carrying multiple narratives within a single family living in New York City in the mid-90’s. I walked out of the film not really understanding the significance of the film taking place in 1995. It adds very little to the film – and even the soundtrack seems to borrow more from the 80’s and 70’s – but the film plays toward debunking that hovering 90’s optimism as a facade for true inner turmoil. How can one be upset when everybody in America is so happy?

The Jacobs family is headed by Pat Jacobs (Edie Falco), a local civil servant, and Alan Jacobs (John Turturro), a struggling playwright and poet. Their oldest daughter Dana (Jenny Slate) is eternally engaged to Ben (Jay Duplass) with no wedding in sight, while their teenaged daughter Ali (Abby Quinn) frequently sneaks out in the middle of the night to either have sex with her friend Jed (Marquis Rodriguez) or do drugs in night clubs. The Jacobs clan frays slowly and unnoticeably but when Ali finds love letters Alan is writing to another woman, she recruits Dana to help piece it together. Dana herself must cope with her own bout of infidelity as she begins seeing an old college flame, Nate (Finn Wittrock). The Jacobs family must come to grips with the fact that their familial structure is wobbling, while also deciding how to trust, love and forgive each other for their transgressions.

There’s a lot going on in this film, and in 94 minutes, it hardly covers everything with enough attention for you to feel like you’ve achieved real closure. But the performances here are very strong. Slate and Quinn as the opposite personalities who come together to help each other give something we rarely see in films: a realistic portrayal of siblings. That spiraling combination of admiration and resentment. Slate has much more character here than her previous role in Obvious Child, but like the former film she’s proving to be an actress comfortable with playing multiple dimensions, unafraid of the harsh realities of human interaction. Turturro and Falco are not given much to work with here, but in their limited time they give strong work of a waning marriage falling by the wayside. I’m a sucker for films about dysfunctional families, I’ll admit, but my admiration grows when those films make prescient points about the ways our families effect our outward lives. Landline does that in spots with wonderful modesty. Forgive me for allowing this film to embrace its scatter-brained screenplay.