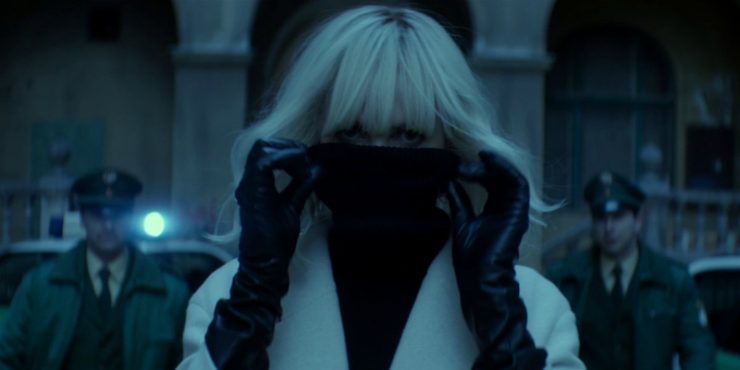 The audaciousness of Atomic Blonde – in its performances, its action set pieces, its hopelessly convoluted screenplay – is certainly endearing at moments. Cherlize Theron’s performance as an MI6 agent named Lorraine Broughton is thoroughly invested in both the physicality and the sexuality of the character. The stunt work and filmmaking is impressive, the soundtrack is invigorating but the movie is occasionally trapped into a Cold War plot that does little more than get in the way. The film is directed by David Leitch, one of the co-directors of the brilliant John Wick. Atomic Blonde has the same level of precision in its set pieces, but its story wants to be Wick by way of Tinker Tailor Soldier Spy. It wants to be a sophisticated spy drama while also thrilling audiences with the profundity of its action choreography. I’m not saying that films can’t be both of those things. I’m just saying that Atomic Blonde is not.

That’s not to say that the film isn’t fun in the kind of escapist way that it attempts – there are more than a handful of breathtaking sequences, including one which tracks down a staircase in a single, brutal, endless shot. But the film’s seemingly earnest attempt to tie itself into issues of Cold War imperialism feels a bit lacking. The film is based on a graphic novel titled The Coldest City by Anthony Johnson and Sam Hart, and it takes place just days before the fall of the Berlin Wall. After the death of MI6 agent James Gasciogne (Sam Hargrave), the agency sends its best agent – Lorraine – to Berlin to retrieve what Gasciogne had on him when he died: a list identifying all of the identities of secret agents within multiple intelligence agencies. Aside from the assignment, Lorraine is also compelled to go on a revenge mission, having had a secret romantic entanglement with Gasciogne in the past.

Lorraine’s contact in Berlin is David Percival (James McAvoy) an eccentric station chief who’s allowed the wildness of Cold War Berlin to seep into his very being. David has been trying to get the list from Spyglass (Eddie Marsan), a Stasi defector trying to trade his information for a trip to the other side of the wall. Spyglass gave the list to Gasciogne but the agent was then killed before reaching David. In a place and time where there is no room to trust anybody, David and Lorraine must wade through a city bubbling with agents and double agents from all over the world and figure out who to trust and who to kill in their attempt to both get the list and get Spyglass safely over the wall. Their main nemesis is KGB forces looking to kill Spyglass, but Lorraine is also being tracked by an undercover French agent named Delphine LaSalle (Sofia Boutella) who wants a little bit more than information from her platinum blonde subject.

There are many layers of duplicity throughout Atomic Blonde and it feels like Leitch and screenwriter Kurt Johnstad are hoping you get so mixed up trying to figure out who plays for who that by the end basic logic won’t be a big factor in how much you enjoy the film. Instead, that is the exact reason that Atomic Blonde at times feels disappointing: it goes through the trouble of constructing such a complicated plot structure without any idea of how to successfully pay it off. Of course, you could choose to ignore all of this and just focus on the film’s exquisite choices in music and cinematography. DP Jonathan Sela and editor Elísabet Ronaldsdóttir both play big parts toward the film’s consistently captivating visual aesthetic. The 1989 period doesn’t add too much to the film stylistically, but it does allow the film to employ a terrific 80’s soundtrack that plays along to the film’s most rousing sequences with great flourish. I imagine that’s what most people will come to see: a woman-kicks-ass special-agent flick with rousing performances and so much subterfuge you won’t be able to keep everything straight. It’s telling to note when Atomic Blonde makes everything confusing and when it conspires to make everything crystal clear.