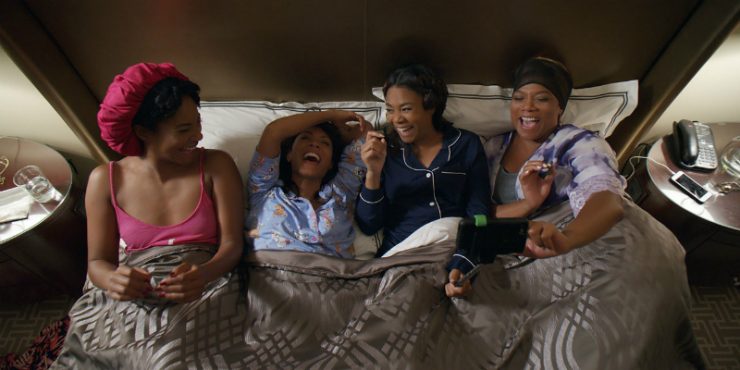 Girls Trip is aiming at a target so small, and so far away, that it’s a miracle that it is able to hit that target with such precision and grace. The film tries and succeeds to be a gross out comedy that is sufficiently gross and sufficiently hysterical in equal measure. It also wants to show its heart, and show its characters in a light that’s both favorable and real. The film stars four black women as long-time friends and while race plays no active part in the film’s plot, Girls Trip‘s unapologetic blackness goes great lengths toward legitimizing director Malcolm D. Lee’s process of showing these women as more than movie caricature. Like Bridesmaids ahead of it, we’re are seeing that not only can women deliver a strong R-rated comedy, but a lot of people will go out to see it. Again, like Bridesmaids, Girls Trip feels like the standard that these films should aspire to, with or without women in the cast.

The film’s script is by Kenya Barris and Tracy Oliver (a story credit goes to Erica Rivinoja), and it follows a standard studio plot: former friends who’ve grown apart reunite for a big bash. Girls Trip does not deviate too wildly from the basic points of this common movie plot. One of the friends, Ryan (Regina Hall), is a best-selling author of self-help books that promote her lifestyle points and her ability, as a woman, to have a successful career and a successful personal life. Her husband, Stewart (Mike Colter) is a retired pro-football player who, together with Ryan, make one of the most popular couples in the country. Sasha (Queen Latifah) is a former New York Times journalist-turned-celebrity gossip blogger, whose click-bait website, “Sasha’s Secrets”, is not as popular as it once was. Lisa (Jada Pinkett Smith) is a single mother of two whose motherhood has definitely turned her away from her partying ways, while Dina (Tiffany Haddish) gets fired from her job just in time for the four friends – labeled the “Flossy Posse” – decide to get back together again.

On the verge of a new endorsement deal that could make her richer than ever before, Ryan decides to celebrate by treating her three friends to a free trip to New Orleans during the Essence Festival, where she will be the keynote speaker. While there, the friends have a lot of drinks, meet a lot of men, and between all of that, they try to settle past disagreements and heal old wounds. The four characters have their archetypal fits. Ryan is the leader, Sasha is the second-in-command, Lisa is the uptight one, and Dina is the unhinged jokester who is never truly under control. Malcolm D. Lee has a very strong understanding of what he’s doing with these women and how their roles will unfurl on the screen, but Barris and Oliver’s script does have its moments of surprise. The film’s ability to simply steamroll this sub-genre’s hackneyed plot points is impressive; that it does so while still being incredibly funny is is even more impressive.

Lee’s direction is mostly hands-off, with the occasional cinematic touch – particularly during a sequence where Dina spikes the Flossy Posse’s cocktails with a heavy dose of absinthe – but he knows that the film’s greatest strength is the performances from his main cast. Pinkett Smith’s Lisa is the most thankless role, but one that the veteran actress plays without missing a beat. Lisa is often berated for her modest clothing, her matronly approach to luring men, but Pinkett Smith finds the humanity in this high-strung woman, and has a few of the film’s best laugh lines. Latifah proves again how dependable a film presence she can be, playing a woman stretched thin by professional and personal obligation. Tiffany Haddish, the film’s least-known commodity, is the film’s comedy all-star, a one-woman raunchfest, equipped with the kind of filthy dialogue that would make Lenny Bruce proud.

Hall, an actress with a long career in many different comedies, is given more of a straight man role, as the unofficial head of the group. Hall’s Ryan is a woman trapped in an unhealthy cycle of over-success. Too much of her public identity is tied into her relationship with Stewart, a relationship that is beginning to work much better as a partnership than a marriage. Her success is also tied to her appeal to white audiences, and the work her and Stewart put toward suppressing the rougher edges of their personality to fit a daytime-talk-show ideal. The film’s main conflict is Ryan’s choice between the mainstream success that gives her all the material joy but represses her identity. It’s her group of friends who know and love her for what she actually is. Hall’s portrayal here, of inner fragility pressed against a constant outward display of stability, is superb, occasionally heartbreaking, and an example of what a talented actress can do if given the proper chance.

Girls Trip occasionally leans itself into over-sentiment – and depends a bit too much on heteronormative romance to solve the characters’ problems – but it does a lot to actually earn these moments. It helps that Lee is a smart enough filmmaker to really take his time with this story, including short asides where we’re shown the jovial spirit of New Orleans, with its brass musical tradition, and that the movie is unafraid to even become a concert film at times, with performances by P Diddy and Ma$e, among others. I mentioned before how similar Girls Trip is to films of this ilk. All of these films explore the evolution of human relationships, how adulthood can go a long way toward changing one’s life, but friendship and family is there to keep us grounded. Girls Trip is no subversion of genre. But it is a testament to sisterhood, and a hilarious comedy that proves, once again, that comedic talent is not limited to one gender.