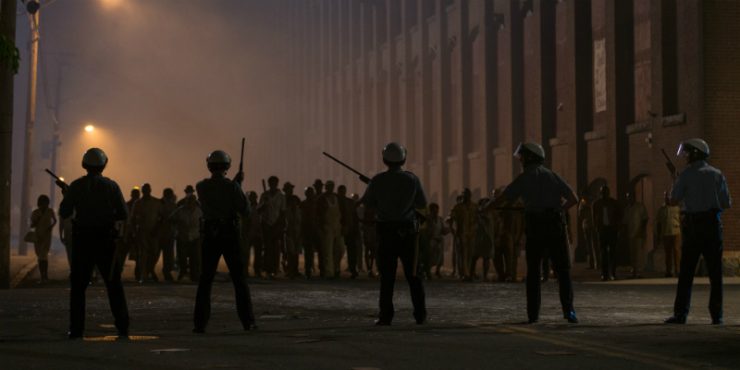 It’s important to note that screenwriter Mark Boal was unable to acquire the rights to John Hersey’s book “The Algiers Motel Incident”, and based his screenplay for Detroit on his own research – interviews and first-person accounts. This is the third time Boal has written a script for director Kathryn Bigelow. Their first collaboration, The Hurt Locker, is a masterpiece that won them both Oscars. It introduced us to a new Kathryn Bigelow, one who prizes a documentary aesthetic, equipped with handheld cameras and jump cuts. “Film as journalism” is a phrase they like to use. The problem with their approach is that we’ve already learned that they’re not very good journalists. Their second collaboration, Zero Dark Thirty, was revealed to over-dramatize the US’s use of water boarding in its intelligence gathering, and when this was discovered, Bigelow and Boal basically shrugged their shoulders. If you want to make journalism, you have to hold yourself to journalistic standards.

So, what to make of Detroit? This film insures itself with a card before the final credits that states that Boal had to take liberties with the film’s events since the actual events have never truly been officially accounted for. So why, after so carefully crafting a film to have an appearance of objectivity, would you choose to undermine it that way? The truth is that Detroit wants it both ways. It wants to be journalism and it wants to have a point-of-view. Bigelow is too good of a narrative filmmaker to stand by and allow her characters to be simple subjects. The Hurt Locker understood the balance between its documentary style and its narrative roots. With Detroit, it feels too much like white storytellers protecting themselves while trying to display examples of extreme white oppression. Detroit‘s villains are beyond vile. They’re sociopaths. Their behavior is pure evil, rife with prejudice and bigotry. But they’re still just individualistic movie villains, faces to point at from the peanut gallery, while you ignore actual issue that afflicted those killed during the ’67 Detroit riots: widespread police violence and institutionalized racism.

A good portion of Detroit takes place in a single scene, in the lobby of the annex of the Algiers Motel. On this fateful night, Detroit is already a militarized zone, undone so badly by rioting and police over-retaliation that Michigan State Police and the members of National Guard are brought in to help patrol the streets. When authorities believe that sniper fire is coming from a room within the annex, they storm into the building and begin to brutally interrogate all its inhabitants: seven black men and two white women. I don’t have exact counting stats, but this scene certainly feels like more than half of this 143-minute movie. The scene is interminable, and intentionally so. Its desired effect is that of Steve McQueen’s masterfully brutal sequences in 12 Years a Slave which drew out the anguish to put its audience in the uncomfortable position of accepting America’s true history. Detroit instead feels more like Michael Haneke’s Funny Games; its tension gives way to a dull inevitability. It seems to almost savor its brutality.

Bigelow is one of our best filmmakers. She used to be a master of genre, and has now decided that her movies must take on a societal importance. Boal’s screenplay steers her in the wrong directions, and as good of a director as she is, she face plants several times into murky territory with odd storytelling choices. The movie’s attempt at proper historical context falls short of properly understanding the unrest that lay at the feet of black citizens of Detroit. Worse yet, Bigelow and cinematographer Barry Ackroyd seem more interested in their cinema-verité filmmaking style than they do about about properly lighting black actors, often leaving members of its cast in under-rendered shadows. Bigelow’s direction is a cloak, attempting to shield Boal’s shallow screenplay. It’s a mistake to be journalistic about this story. It deserves emotion. It deserves a proper perspective. It does not need to be bound by the rules of objectivity.

This isn’t a bad film. Its performances are strong across the board. John Boyega plays Melvin Dismukes, a black security guard who enters the annex in an attempt to try and stop the carnage, only to become a patient accomplice in the crimes. Algee Smith is Larry Reed, the lead singer of The Dramatics who finds himself caught in the mess the very night he was meant to be discovered by Motown executives. Will Poulter, Jack Reynor and Ben O’Toole play the three Detroit PD officers who take it upon themselves to take an already violent situation and turn it into a night of terror. Poulter is Philip Krauss, an officer already cited for over-aggressive behavior and killing a Detroit civilian that posed no threat. Krauss is our main villain. The bad apple. Poulter plays him with a eery detachedness, a banality that summons true horror. Boyega and Smith bring real feeling and fear to their performances, but Poulter ends up being the star of the show. This is the pitfall all of these films fall into: they end up mesmerized by their racist oppressor.

This is an important film to the degree that it will bring awareness to an incident that many may have forgotten or didn’t know of to begin with. It disproves the conservative theory that narratives of police violence are over-blown media hysteria. The film wants to make you angry, and it succeeds. Detroit pushes the limits of what an audience can take in a single scene, in the way an episode of Game of Thrones stirs its audience by killing one of the main characters. You could probably never encapsulate the effect of an event like what happened at the Algiers Motel in a single movie. OJ: Made in America needed five hours to tell its story, and that was just about a single murder. The black characters in Detroit are marginalized, victimized and even terrorized, but never are they given a real perspective, so instead we’re left with something that borders on exploitative. Bigelow is incapable of making a film that’s uninteresting, but she’s also too precise a storyteller to let these kind of oversights slide.