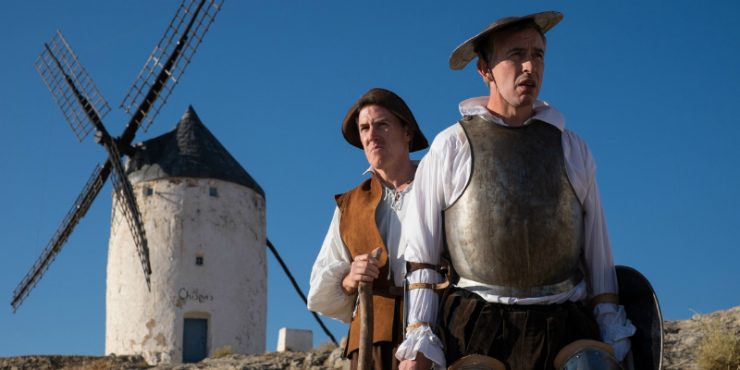 Michael Winterbottom’s third serving of The Trip is more of the same, which is to say it is an absolutely delightful film, filled with hilarious riffs by its two stars, Steve Coogan and Rob Bryden. Their companionship – in which the two men seem to love and despise each other in equal measure – has now carried three terrific films, showcasing an intimacy between the two men which includes competitive battles of impressions, meals in various high-class restaurants, and a journey through the culture of whichever land they explore at the time. The brilliant simplicity of these films could remind some of Linklater’s Before Trilogy; both films document the evolution of a relationship in different European cities, but even The Trip is free of the complicated emotions in the heart of Linklater’s trilogy. Winterbottom’s series is so completely stripped down to the charm and wit of its two stars. In The Trip to Spain, Coogan and Bryden impersonate De Niro and Brando, dine at some of the finest Spanish restaurants and ponder the influence of Spanish culture including The Moors and Cervantes.

More than the previous two films, Spain contemplates mortality as Coogan’s character frets over a married lover (Margo Stilley) and an agent that has just left him high and dry. Bryden on the other hand, always cheerful and performative to the point of exasperation, seems satisfied with his small family and less glamorous life. A lot of jokes are made at the expense of Steve Coogan’s two Oscar nominations (as writer and producer) for Philomena. The Trip to Spain does little different from the previous two installments and that’s no criticism. It feels a bit longer, the mortal coil of the characters places the humor in a more sober mood, but Coogan and Bryden are still funny, and Winterbottom still interacts with his locales with a kind of romantic appreciation that mimics infatuation. Spain ends on a truly wacky note, but that doesn’t take away from the rest of the film, which is a light-hearted portrait of two almost-friends learning that there are few things better than a beautiful landscape and some food.