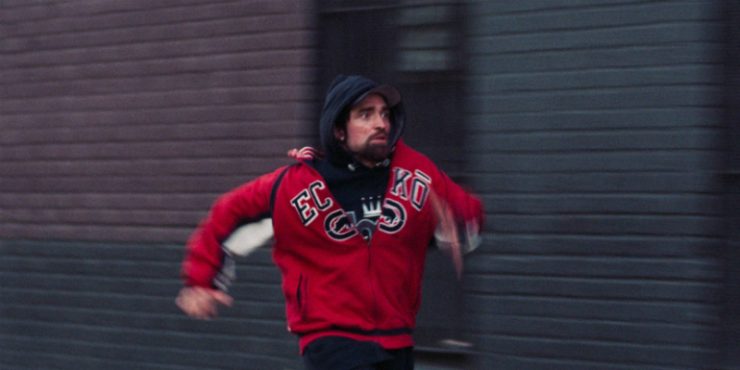 Good Time is an incredibly well-directed film, made by two directors that have a frighteningly strong grasp of the tone and effect of the story they’re trying to tell. A lot of this is the kind of textbook hard-to-watch indie stuff that the director brothers Josh and Ben Safdie have already created a reputation for. 2014’s Heaven Knows What was a heroin love story that set them up as our latest pair of visceral, grotesque filmmakers, and Good Time is them paying off on that promise. Films like this can be difficult to watch, not just because of the content, but because its sometimes hard to see the line between artists showcasing a way of life and glamorizing pain, crime, abuse, etc. In a lot of ways, Good Time is a Nan Goldin-ization of deplorable behavior. It explores violence, drug use, robbery, emotional manipulation, but it’s hard to get the sense that the Safdies really uncover anything worthwhile. If anything, it seems more like a party where the entire audience is invited into this seedy universe. I’m not sure it’s my kind of party.

Robert Pattinson plays Connie Nikas, a low-life New Yorker who’s younger brother, Nick (Ben Safdie), is mentally handicapped and prone to violent tempers. Because of this, Nick is forced into a program that hopes to nurture his mind and curb his more sinister urges. Connie doesn’t see it that way, he feels the program is imprisoning Nick against his will, forcing him into a routine he did not agree to. Connie’s plan is to rob a bank and use the money to get him and his brother out of New York where they can live without government harassment. When the plan goes awry and Nick ends up arrested, Connie finds himself deep into a whole new set of problems. Needing $10,000 to pay Nick’s bail and get him off of Riker’s Island, Connie works deep into the night, meeting various characters of fluctuating moral conscience, including an impressionable sixteen-year-old girl named Crystal (Taliah Webster), a drug and alcohol addicted dope fresh out of prison named Ray (Buddy Duress), and a late night security guard at a Brooklyn amusement park (Barkhad Abdi).

If Good Time establishes anything about Pattinson’s Connie, it’s that he has a passionate devotion to Nick. All of his behavior, no matter how bereft of nobility, is motivated by his need to help his handicapped younger brother. Connie has made his choices in life, and is fine to spend his life as a thief or a drug dealer or whatever other task he must take on in order to survive. It’s obvious throughout the film that Connie cares little for himself. His sense of self-preservation only stretches as far as it helps Nick. This becomes clearest in Pattinson’s performance, which is edgy, fierce and – despite all the reasons for it not to be – surprisingly charming. Connie is intuitive to a point. He comes up with ideas quickly, and they’re spot on only about a quarter of the time. When he learns about the money he needs, his first thought is to approach Corey (Jennifer Jason Leigh), an unhinged woman who fancies a getaway vacation with Connie. Instead, he asks her to use her mother’s credit card to get Nick out of jail. It helps that he’s the smartest idiot of the bunch.

This reminded me a lot of Tilda Swinton in Julia. That movie was also a mess propped up by the performance of its lead star. Both movies show a tense, complicated journey as bad decisions lead to more bad decisions before an ultimate collapse. But in Julia I felt legitimate suspense, and more importantly, that film’s script invested in Swinton’s Julia in a way that Good Time never does with Connie. Good Time is in complete awe of its protagonist, so much so that it never takes the time to really know him. The lengths he’s willing to go through, the lives he’s willing to compromise just to get his brother out of a government program (which, let’s be clear, Nick very much needs to be in). And this is where I struggle with Good Time. The Safdies add pastel colors and a wondrous, synth-heavy score (by Oneohtrix Point Never), decorating a cake that’s all sweetness and no substance. Sure, we are rooting for Connie as an anti-hero, but to what degree does Pattinson’s star persona spill over into what the audience wants? Do the Safdies understand that Connie’s behavior is not only ignoble, but despicable?

The Safdies prescribe to a kind of “bad vibes” form of independent film, of which I am known to be a fan, but Good Time is too much flash, too much style. With cinematographer Sean Price Williams, the Safdies are trying to have it both ways: pretty and ugly, a bold visual style under the guise of grit. A.O. Scott wrote in The New York Times about this film’s sketchy dealings with race. The fact that co-director Ben Safdie plays a mentally handicapped man as some kind of slack-jawed pituitary case isn’t exactly stellar either. The Safdies want to be provocative, and sensitivity isn’t exactly something that plays into their egos, but the fact that they also really want to be cool makes me ambivalent toward Good Time and its house music, blacklight aesthetic. Bad vibes indeed, not a good time to be found.