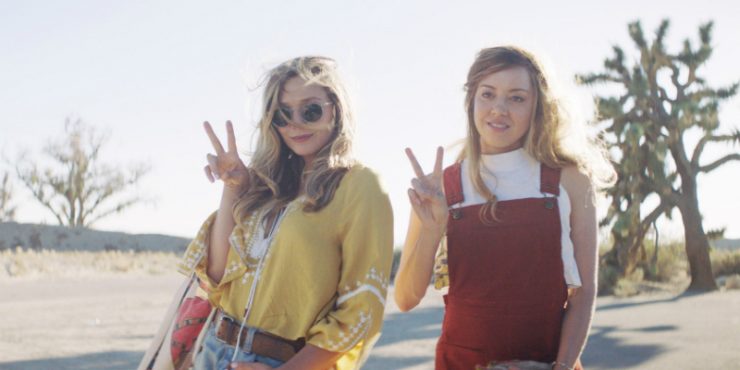 Ingrid Goes West is a mental health melodrama cloaked as a social media satire. The film is such a treat because it functions well as both. As we’ve finally found a way to make our digital lifestyles more cinematic, we’re seeing a spring of new movies willing to make a film based on this very premise. Earlier this year, Olivier Assayas’s Personal Shopper was able to create thundering suspense from a series of text messages. Now, film director Matt Spicer is making a Twenty-First Century Single White Female by way of The King of Comedy, and he’s doing it with a fundamental knowledge of how mental instability is enabled by our most narcissistic social media habits. Ingrid has its main focus on Instagram, but this film could be about Twitter or Facebook or Snapchat – Spicer’s film isn’t too interested in dissecting how these sites and apps have transformed everyday people. He’s instead focused on how it corrupts those most vulnerable. It’s about as sad a comedy one’s going to come across this year.

The film stars Aubrey Plaza as the titular Ingrid, and this is the first time that I’ve seen the thrity-three year-old actress in a film role that she seems comfortable in. Spicer ingeniously mutates Plaza’s morose comedic delivery into a desperate loneliness. The details of Ingrid’s past are a little fuzzy. We know that her mother has recently passed away after a long bout with illness. We also know that she has been placed in a mental hospital after macing a woman named Charlotte (Meredith Hagner) whom she only knew from Instagram. Upon her release, Ingrid decides to cash the $60,000 check left to her from her mother and move out to California. Her plan? Meet and befriend Taylor Sloane (Elizabeth Olsen), an Instagram celebrity and lifestyle expert who becomes Ingrid’s new social media infatuation. With a backpack filled cash, Ingrid rents a room from a Batman-obsessed wannabe screenwriter named Dan (O’Shea Jackson Jr.) and starts manipulating run-ins with Taylor. When those fail, she simply kidnaps Taylor’s dog.

Ingrid returns the dog under the ruse of being a helpful neighbor. She refuses a cash reward but willingly accepts a chance to have dinner with Taylor and her husband Ezra (Wyatt Russell). In a single night, Ingrid decides to buy one of Ezra’s art pieces and offers to use her truck (which she doesn’t have) to move a trailer to Taylor’s property in Joshua Tree. When Ingrid and Taylor make the trip in Dan’s pick-up, Taylor shares secrets, showers Ingrid with enthusiastic compliments and even posts an Instagram picture and tags Ingrid in it. The friendship is everything Ingrid wants and more, but things become complicated when Taylor’s drug addict brother, Nicky (Billy Magnussen), arrives from France and immediately begins to sniff out Ingrid’s more sinister motives. Between Dan, Nicky and Taylor, Ingrid begins to acrobatically juggle different lives as she attempts to acquire the picturesque lifestyle she’s always dreamed about. It’s proper to ask what someone like Ingrid would even do with that lifestyle if she got it.

Ingrid’s behavior is parasitic, often pathetic, but in the hands of Plaza’s performance and Spicer’s direction, there is a humanism that arises, with true empathy. Ingrid Goes West might be the least funny comedy of 2017, and yet, it still succeeds as satire. The film’s script (by Spicer and David Branson Smith) is so particular about where to spread out its laughs, and even when they occur they’re like small rumbles amongst a raging storm of neurosis and self-deception. Taylor is a woman who’s made Instagram into a monetary necessity – she’s paid by various brands to photograph herself with certain items and pieces of clothing – and yet, she does not feel as ensnared by the emotional trappings of the app that Ingrid does. That’s because her entire brand is based on the Ingrids of the world buying into her image as reality. When Taylor’s actual reality begins to arise (her husband’s artistic frustration, her brother’s drug habit, her own vapid existence), Ingrid can hardly handle it.

I mentioned Scorsese’s The King of Comedy earlier, and I think it’s worth mentioning again. Both films recognize the bad behavior from their protagonists, while still pointing out how mistreated they are. After the death of her mother, there is no one left to help Ingrid curb her most fragile mental hiccups. Only Dan seems interested in trying to make her happy (the film’s most romantic scene is also probably the film’s funniest, where Ingrid touchingly and hilariously agrees to recreate one of Dan’s sexual fantasies), but he unfortunately is not the acceptance Ingrid is looking for. Both Ingrid and King of Comedy‘s Rupert Pupkin are disturbed individuals, trying to exist in a society that has declared their idiosyncrasies undesirable. In a lot of ways, Ingrid showcases the way our phone-app-addicted society only further stigmatizes mental health, and pushes individuals to strive toward unrealistic ideals.

Ingrid‘s conclusion is a little cheeky, because it decides to pay off on the satire instead of on the drama. It feels a bit too easy even if it does feel like a proper way to finish off this story. Spicer also drenches the film in an 80’s-era neon aesthetic (equipped with a Drive-like titles font) that adds nothing to the movie but an excess style that doesn’t totally match up to the movie’s true spirit. Perhaps this has something to do with brand-spanking-new distributor Neon making its first big feature push, all of the marketing elicits the same vibe. This is Spicer’s first feature. It’s filmmaking strength is in its editing (by Jack Price) if at all, but Spicer seems equipped to direct performances. If anything, he understands how to use his stars, showing that this kind of dark, brooding performance was always inside of Aubrey Plaza. Who knew that the best way to make her work in a film was to trim the laughs?