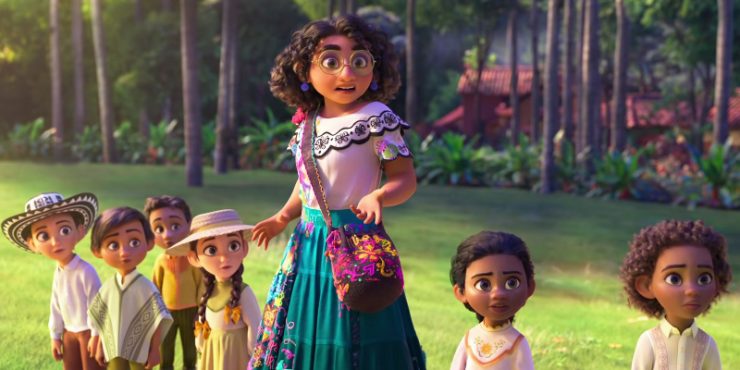 Encanto takes place within the lush tropical villages of South America, which pops with vibrant color and diverse wildlife. The latest film for Walt Disney animation (the 60th to come from the studio, as the film’s opening announces) takes delicate care with its setting, embellishing its cultural flourishes and visual pizazz. It even pays credence to the fantastical tradition that runs its way through South American literature – though it never attempts to reach the depths of Gabriel Garcia Marquez or Jorge Luis Borges. The filmmaking is exceptional and the animation top notch. Its songs (written by Lin-Manuel Miranda) are catchy and fun. It’s giving you everything you want from a family friendly Hollywood film.

Earnest and sentimental like nearly all Disney fare, Encanto spends a lot of time trying to be more than just its vibrant style, and never quite figures that out. The story is built upon tentpoles of familial tension standard in kid’s movies these days; centering on an outsider struggling to fit into a robust ecosystem. In this case, the outsider is Maribel Madrigal (Stephanie Beatriz), a bespectacled young woman living in a magical home with a magical family. That’s not just an expression, the house and her relatives all have special powers. Some powers are dainty and endearing, while some contain awesome abilities. One of her sisters, Isabella (Diane Guerrero), can make flowers bloom wherever she pleases. The other sister, Luisa (Jessica Darrow), has superhuman strength.

The powers come from a special candle gained by Abuela Alma (Maria Cecilia Botero) after her husband was killed. Abuela is the all-powerful matriarch of the family, making sure each member is using their special gift to enhance the community. Maribel has the unfortunate distinction of not having any powers. She’s not unique in her family. Her father and uncle married into the Madrigals and must get by on their charms, but Maribel is the only one to get a gift-giving ceremony with the candle and come up empty. For her part, Maribel mostly keeps a positive attitude, though it doesn’t help matters within the usual sibling rivalries. The person most concerned is Abuela, who sees Maribel’s failure to get a gift as an omen of things to come. Will the Maribel family lose their special gifts?

That existential question becomes more of a reality when the magic house begins to crack and the candle shows signs of going out. This was foreseen in a vision by Maribel’s uncle, Bruno (John Leguizamo), whose proclamation spooked Abuela so badly that he fled the family to outrun her disappointment. Armed with scant knowledge, Maribel takes it upon herself to find Bruno and stop whatever forces are seeking to bring the family down. I think it’s telling that we never truly find out what gave the candle its power, nor do we ever learn the source of its waning strength. Of course, this is all a shell to get to the real heart of the matter: family conflict. A tension so well worn in Disney films that you can see the plot points lining up just as the characters are being introduced.

I actually don’t mind a film having a flimsy narrative if its main point is to dazzle you visually, but conflict is a real issue in Encanto. In a story where the fate of an entire community hangs in the balance, the stakes always feel surprisingly low. That might be because of the musical elements that naturally keep the tone peppy. Miranda’s songs have his usual pop/hip-hop hybrid, a particularly American genre which doesn’t always jibe with Germaine Franco’s salsa-heavy (and also very good) musical score. The large scope of a Disney production requires a multitude of elements and Encanto sometimes buckles under the weight – which makes the running theme of the Madrigals buckling under the weight of Abuela’s constant pressure to be perfect a bit prophetic.

This is a gorgeous film to look at, though, even with Disney’s impossibly high standards. It’s always good to see, with a studio so uncannily good at textures and recreating real three-dimensional life, that style has not taken a back seat. Disney is still interested in all that animation has to offer, and they have not stopped exploring those possibilities. They’ve made a pointed decision to vary their cultural footprint, both with their own animation studio and Pixar. The choice has produced some very poignant films, and Encanto is one of them. But with a studio that has a habit of producing instant classics, Encanto falls short of that criteria.