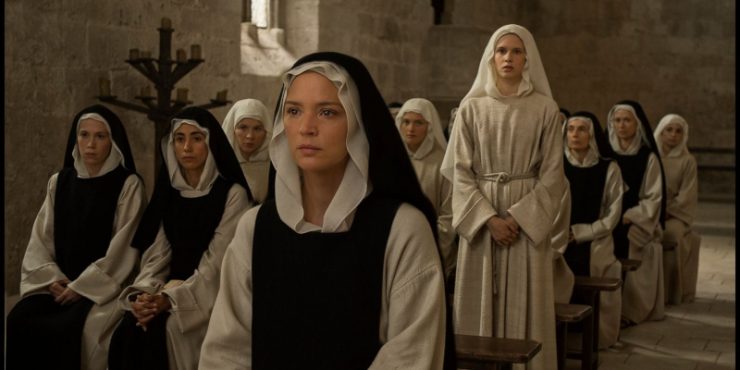 In Benedetta, a large group of Italian nuns in a Tuscan convent speak to each other in French, and while this is far from the most ridiculous part of the movie, it’s indicative of the movie’s general aesthetic, which is shameless and taboo-crushing – standard fare for Dutch filmmaker Paul Verhoeven. A world-famous provocateur, Verhoeven loves working out his own outlandish perversions (erotic, spiritual, economic) through the art of cinema. Benedetta is based on a true story from the 17th Century (and the book Immodest Acts by Judith C. Brown), about a nun (the titular Benedetta, played by Virginie Efira) who sees vivid visions of Jesus and whose homosexual proclivities fly in the face of the convent’s moralities. How Benedetta’s visions line up with her sexual preferences is the question that Benedetta takes great joy in exploring.

Verhoeven’s movies often miss me emotionally, even if I have always been an appreciator of his fearlessness. His penchant for placing shock and metaphor above narrative and characterization has always left me cold, though some of his films I’ve enjoyed more than others. Benedetta is transparent in its passions. From childhood, Benedetta has always seen herself as touched by God, with the ability to perform His will. A humorous scene at the film’s open where she instructs a pigeon to shit in a man’s eye gets the point across in a crude fashion that you know Verhoeven relished. Years later, in a convent in the city of Pescia, Benedetta still experiences frighteningly real correspondences with Jesus. Her Jesus is devastatingly handsome, with a chiseled physique and a valiant aura. In her dreams, he is often saving her from life-threatening predicaments before making thinly-veiled romantic advances.

Things get even more intense when she meets Bartolomea (Daphne Patakia), a peasant girl abused by her father. Bartolomea seeks refuge in the convent, and Benedetta agrees to help her. Despite her harrowing life experience, Bartolomea is friendly and she propositions Benedetta aggressively. The sexual awakening triggers frightening convulsions in Benedetta, as well as stigmatas. Seemingly possessed by God, her condition frightens Bartolomea, disturbs the convent’s Mother Superior (a brilliant Charlotte Rampling), and wins over the locals who believe her to be the voice of God. As Benedetta claims more power, she also becomes more confident in her own sexuality and her relationship with Bartolomea, allowing herself to experience pleasures she’d previously suppressed.

If it seems blasphemous to thematically tie sexuality to spirituality, then congratulations, you have taken Verhoeven’s bait. To the degree that his films work, it is usually because he has successfully tied together the seen and the unseen, the spoken and unspoken. He takes great pleasure in revealing to audiences that the subject matter we love to avoid is the very thing that most preoccupies our mind. In his trademark on-the-nose delivery, Verhoeven has Bartolomea craft a dildo out of a wooden statue of the Virgin Mary, an exhilarating if crass melding of Benedetta’s two worlds, and a note-perfect distillation of everything Verhoeven represents as a storyteller.

Verhoeven keeps you guessing as to how much of Benedetta’s behavior is real and how much is fake. Many of the supporting characters debate the point to their own detriment, as the symbolism of her possession takes precedent over its validity. Part of Benedetta’s evolution as a Christ figure is her own acceptance of her sexual needs, allowing her devotion to take the form of pleasure. The film’s conclusion, filled with all the iconography one would expect, is moving in its dedication to the premise, unflinching in its commitment to its protagonist and her story. I admit to being at a loss as to how to process Benedetta as a whole, as I still struggle to know when Verhoeven is playing the artist and when he’s playing the erotic trickster. That indecision has always been part of his milieu but has always kept me off-balance, and while Benedetta‘s bravura is unquestioned, I can’t say I was moved by it.